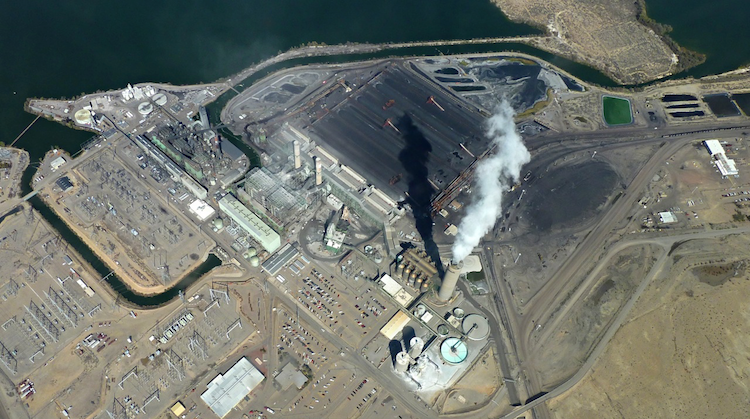 While other coal plants in the region are announcing early closures, due in large part to the low cost of renewables, the 55-year-old Four Corners Power Plant was issued a whopping 25-year permit extension in 2015. As you may remember, we filed a lawsuit over the decision, deeming their Environmental Impact Statement (EIS) wholly inadequate. Despite publishing hundreds of pages, they failed to analyze important impacts of such an extension. Among other ludicrous findings, the so-called EIS claimed the climate impact would be ‘neglible.’

Although our lawsuit, along with several other partners, did not name a tribal entity, a District Court dismissed our case based on sovereign immunity. Today, we are appealing that decision. You can see the full press release below.

PHOENIX – Navajo, regional and national conservation groups today filed with the Ninth Circuit Court of Appeals to continue their challenge of a 25-year extension of coal operations at Four Corners Power Plant and Navajo Mine. They appealed to the Ninth Circuit Court of Appeals a decision from Arizona’s federal district court dismissing their case. The groups are challenging the Department of the Interior’s extension for violating the National Environmental Policy Act, Endangered Species Act, and the Administrative Procedure Act. The reason for the appeal is that the U.S. District Court for the District of Arizona dismissed the lawsuit on the basis of the sovereign immunity of the Navajo Transitional Energy Company, though the company was not a named defendant in the action.

Attorneys from the Western Environmental Law Center, the Center for Biological Diversity, and the Barth Law Office represent Diné Citizens Against Ruining Our Environment, San Juan Citizens Alliance, Amigos Bravos, and the Sierra Club on this case and appeal.

“The dismissal of the FCPP/Navajo Mine litigation conflicts with longstanding Ninth Circuit case law. The practical effect of the decision is to exempt polluting industries in Indian Country from federal environmental law. This disempowers tribal citizens and incentivizes the worst polluters to locate on tribal land,” said Shiloh Hernandez, attorney with the Western Environmental Law Center.

“While acknowledging NTEC’s interest in the ownership of Navajo Mine, it is incomprehensible that that merits of the FCPP/Navajo Mine litigation have been ignored as a result of the dismissal of the case,” said Mike Eisenfeld of San Juan Citizens Alliance. “In the environmental impact statement for the Four Corners Power Plant and Navajo Mine, impacts were minimized despite 50 years of pollution including mercury, carbon dioxide and nitrogen oxide emissions that have taken a huge historic toll on the region’s air, water, land and people. To extend the life of a 50-year-old coal complex by 25 more years is unconscionable given what we know about coal.”

“The Four Corners Power Plant has a long history of poisoning people and native fish with mercury, selenium, and other toxic pollution,” said Michael Saul, a senior attorney with the Center for Biological Diversity. “The court’s dangerous ruling threatens to give federal agencies a free pass from complying with laws that protect communities and wildlife on tribal lands.”

“The rest of the country is transitioning away from coal toward low-cost clean energy, so coal companies are desperate for decisions like this, despite showing no regard for the long-term economic, environmental or health consequences facing tribal nations,” said Camilla Feibelman, Rio Grande Sierra Club director.

“It is well past time to transition away from coal to clean and affordable energy sources that don’t poison our water and communities,” said Rachel Conn, projects director for Amigos Bravos. “Mercury pollution has led to many fish consumption advisories in the region and is listed as the top cause of water quality pollution in New Mexico lakes and reservoirs. It is unacceptable that in over half of New Mexico’s lakes and reservoirs, New Mexicans can no longer fish without worrying about poisoning their families.”

The original complaint is available here.