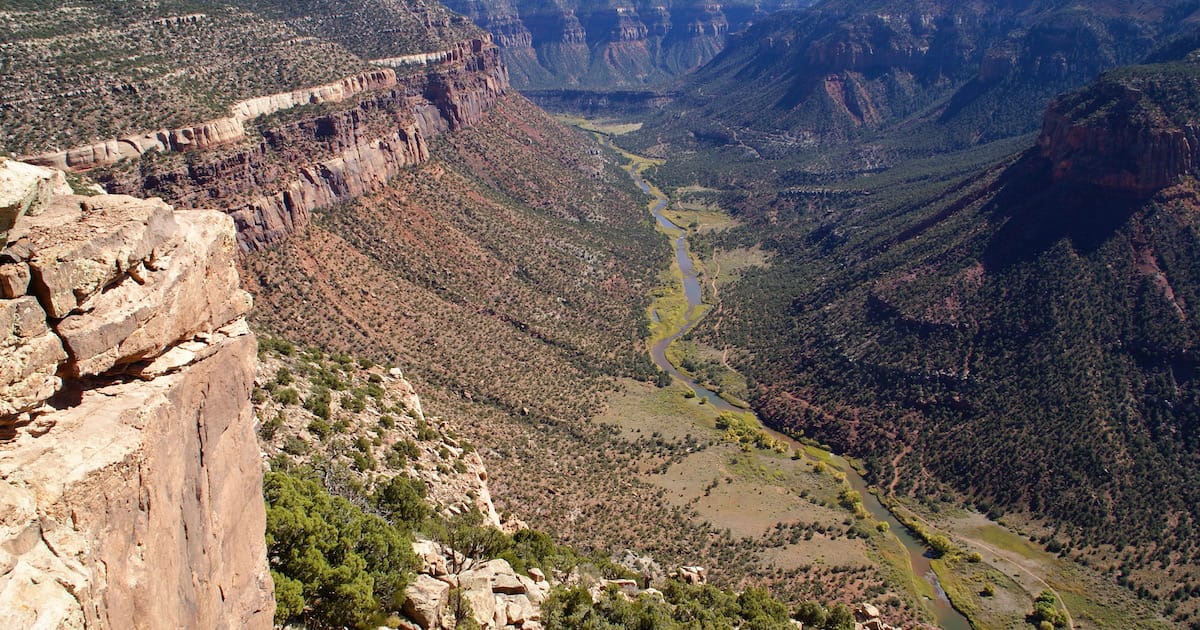 By Mark PearsonNovember 3, 2021No Comments

One of the most remarkable features of Southwest Colorado is the spectacular canyon carved by the Dolores River.

On those occasions when an abundance of snowpack blesses our region, adventurers can enjoy floating through 100 miles of a wild canyon wonderland between McPhee Reservoir and the Paradox Valley. But even without water, the canyon offers dramatic scenery and opportunities for backcountry exploration.

Because of its extraordinary appeal, the Dolores River has spurred literally decades of conversation about how to protect and enhance its wild character. Most recently, Colorado Sen. Michael Bennet unveiled draft federal legislation to establish a Dolores River National Conservation Area downstream of Bradfield Bridge, and is asking for public feedback by Oct. 28.

Concurrently, the pending Colorado Wilderness Act, which has already passed the House of Representatives this year, similarly addresses some of the same canyon landscapes. The two approaches offer both overlapping and complementary benefits.

Bennet’s bill addresses the threats that future mineral development or oil and gas exploration might pose to the canyon, but does not solve the conundrum of low or non-existent flows downstream of McPhee Dam. For those most familiar with the Dolores from occasional opportunities to float it, the river’s persistent lack of water below the dam is endlessly frustrating, but also a Gordian knot to unravel.

Bennet’s Dolores bill incorporates only the portions of the river canyon in Dolores County and San Miguel County, a stretch of about 60 miles from Bradfield Bridge to Big Gypsum Valley. His approach is premised on support from county commissioners, hence only those areas with support from those stakeholders are included in the legislation.

One key aspect of the senator’s proposal is to prohibit future oil and gas leasing and exploration for the entire length of the canyon. Some might recall that about a decade ago, an oil and gas company attempted to lease much of the Dolores River Canyon hoping to exploit a new natural gas play in deep shale formations, which fortunately came to naught. The bill would preclude future similar threats.

One renowned feature of the Dolores is the Ponderosa Gorge between Bradfield Bridge and the Dove Creek pump house. While the Colorado Wilderness Act would designate the Ponderosa Gorge as a regular wilderness area, Bennet’s bill proposes an alternative designation as a Special Management Area, but one with protections similar to wilderness.

Bennet’s National Conservation Area legislation aims to maintain the status quo with regards to water. It eliminates the Dolores River’s suitability as a future wild and scenic river, but also prohibits additional future water storage projects that could further impair the river’s value for recreation and its native ecology. The bill would not put any additional water in the river downstream of the dam, and does not take away from current agricultural uses.

Protecting the Dolores River Canyon has energized local communities and the larger public for many years. Bennet should be commended for his persistence in pursuing federal protections for the canyon. The draft legislation was many years in the making, but could still be improved in several aspects.

One immediate concern is coordinating with the sponsors of the Colorado Wilderness Act, including Rep. Diana DeGette and other Colorado House members, to weave together the two overlapping legislative approaches.

Neither of the legislative efforts will create more water in the river, either to restore the downstream ecology or to offer whitewater recreation opportunities. But they would ensure the integrity of the canyon’s undeveloped character, and forestall future threats that could undermine the wild nature of the Dolores River Canyon.