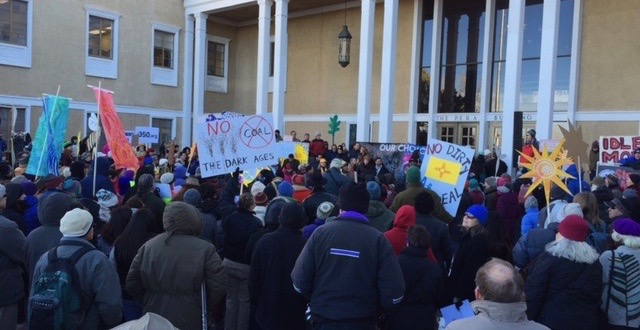 Of the many emails we’ve received at San Juan Citizens Alliance, this may be the oddest.

“I see that you are not on board with our President elect. Please remove us from your mailing list. Proud Deploreable (sic) who used to support your group.”

This is not the nastiest email we’ve received (far from it). Nor does the author desperately attempt to link our organization to a socialist conspiracy bent on destroying American sovereignty. (You’d be surprised how many of those we get.) No, it’s just perplexing on at least two levels.

First, San Juan Citizens Alliance is the Four Corners’ regional environmental advocacy group. No hidden agenda there. We believe that clean air, pure water and healthy lands better serve the health of our community and economy than their defiled and dangerous opposites.

For the past 30 years, this has been our calling. Over that time, five separate presidential administrations have come and gone. During each, regardless of party affiliation, San Juan Citizens Alliance has been an uncompromising advocate for environmental health.

To underscore this point, consider our activities under the outgoing administration. During President Barack Obama’s tenure, San Juan Citizens Alliance brought close to 10 separate lawsuits against the administration for failing to adequately protect the health and well-being of our environment and communities.

We’re proudly not “on board” with any politician. Contrary to popular belief, having a “D” after your name doesn’t insulate politicians from the pressure of an environmental organization. We care about politicians’ stances on issues. In response to those stances, we’re happy to be an equal opportunity offender on both sides of the political aisle.

Which brings me to my second concern with the above email. Our society seems increasingly challenged to cross the conceptual boundaries established by political dogma and the pundits who incessantly regurgitate that dogma.

You’re either down with the program or not, a basket-sitting deplorable or first-class flying, fine-wine sipping elitist.

If there is a threat to American democracy, it is the threat of tribal politics and its ability to entirely displace informed and thoughtful political debate.

Is it possible for a supporter of candidate Donald Trump to oppose President-elect Trump’s highly anticipated rollbacks of core environmental protections? Of course. Political affiliation is not a zero-sum game. When it becomes one, our democracy is at risk.

The better question to ask would be: is President-elect Trump doing anything leading up to his inauguration that would justify concern or opposition from environmental champions?

Based on Trump’s picks for key Cabinet positions, it is becoming less hyperbolic every day to claim that a Trump administration could be one of the most environmentally destructive administrations to ever occupy the White House.

Top pick to lead the Department of Energy? Former governor of Texas Rick Perry, a man who listed this very agency as one of three federal agencies he’d abolish if elected president.

Secretary of State pick? Bill McKibben, outspoken advocate for international climate-change policies that reflect the scientific consensus of climate change as existential threat to civilization as we know it.

While the political landscape may be shifting with the election of Donald Trump, the aim of San Juan Citizens Alliance remains unchanged. Last we checked, sucking on the end of a tailpipe remains contraindicated for healthy lung tissue. Until the new Health and Human Services Secretary obviates that finding, we’ll continue to work to improve regional air quality and protect the environment that sustains us.