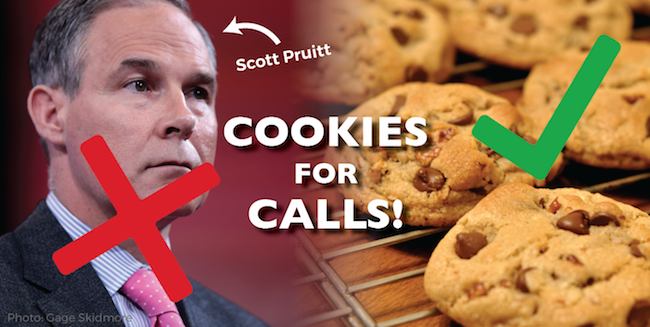 Call your Senators: No Pruitt for EPA!

By Erika BrownDecember 21, 2016No Comments

Last night we hosted an event called Cookies for Calls: No Pruitt for EPA. We handed out homemade cookies to those of you who stopped by and made a call to your Senators. Many of you had never called an elected official before and you thanked us for making it easy to do something about an issue so important to you.

For those of you that didn’t make it or don’t live in Durango, we invite you to call your Senators now. Tell them you want them to vote agains Pruitt as the head of the EPA, how critical it is for the agency to be led by a person who believes in and values science, climate change and prioritizes the health of our citizens over corporate profits.

Never called your Senator before? This is the time to start. Fear not.

1. It’s easy. Really, their staff’s job is to listen and record. All you have to do is tell them why you are calling (talking points below help!) and give them your name and zip code.

2. It works. Emails are good, but calls are better. Few people actually make calls, so the impact can be greater.

3. It feels good! Really. It’s empowering, and you’ll probably want to keep making calls. Do it. In fact, it’s not a bad idea to enter these numbers right into your phone so you can call any time

Let’s do this. Below are the DC numbers for each of our Colorado and New Mexico Senators. Call the one from the state you live in. Below that are some sample talking points. Read through them first and either recite one or two or use them as a jumping off point tell them what is most important to you in your own words. The more personal the better.

I am calling to ask Senator _________ to vote against the confirmation of Scott Pruitt as Head of the EPA because:

As a climate change denier he cannot be trusted to protect Americans from the threats of climate change or make informed science-based decisions on which good policy must be founded.

Pruitt has repeatedly demonstrated condemnation for many of our bedrock environmental protections, and therefore cannot be trusted to protect them.

His mockery of rigorous and established climate science and work to undermine critical pollution limits to enrich the oil industry should disqualify him.

His history of secretive, coordinated work with the oil industry to challenge pollution standards and prioritizing their profits above  protecting the health of Americans makes him unqualified to lead an agency tasked at protecting human health and the environment.

Background: Earlier this month, Trump announced Oklahoma Attorney General Scott Pruitt as his pick to run the Environmental Protection Agency (EPA). Pruitt is a climate denier and one of the agency’s most aggressive critics. As Attorney General he has boasted of his work to undermine the agency, primarily by leading lawsuits against the agency challenging regulations on carbon emissions and water pollution. In 2014 the New York Times uncovered his ‘unprecedented, secretive’ alliance with industry. Among other actions, he sent an industry-penned letter to the EPA contending they overestimated air pollution from oil and gas development.