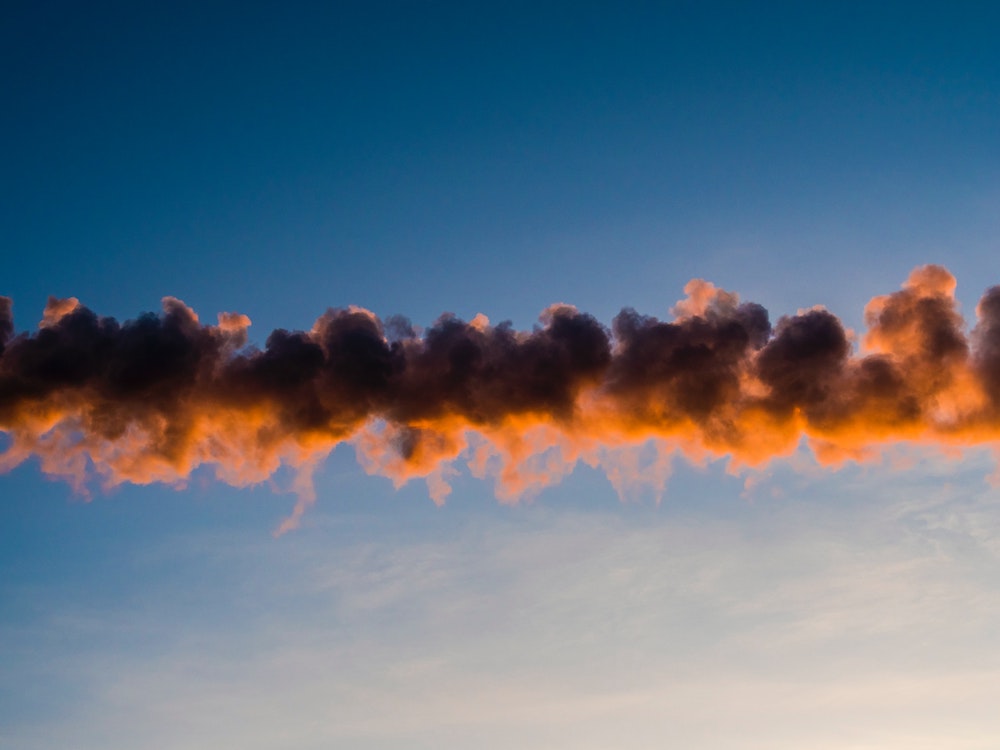 Here in the Four Corners, we highly value clean air, pure water, and healthy lands, which are the foundations of resilient communities, ecosystems and economies in the San Juan Basin. But with air quality worsening, we need to take action to protect what matters most to us. The EPA must fix outdated air quality standards to reflect modern science and health data on fine particulate matter and ozone pollutants. We are calling the Biden Administration to prioritize air quality and health in our backyard.

The Biden Administration has an opportunity to set science-based Air Quality Standards that protect the health of our people and environment. Specifically, the EPA must take action to address historic environmental injustices and to restore the role of science in setting federal health and environmental standards regarding particulate matter (PM) and ozone pollution.

The latest science and medical data demonstrate the urgent need for tighter limits on these harmful and pervasive pollutants, particularly to protect vulnerable populations including children, older Americans, people with asthma, pregnant people, people with underlying health conditions and sensitive ecosystems. Stronger standards for ozone and particulate matter will significantly benefit public health and the environment, while also helping advance efforts to combat climate change. This is important for all Americans, but particularly environmental justice communities who are more likely to live in areas with dirty air and bear heavier burdens from the effects of climate change and extreme weather.Too many Americans suffer health harms and premature death because the air where they live is unsafe to breathe. Study after study has shown that the areas with the dirtiest air continue to be disproportionately lower-income communities and Black or Latinx neighborhoods. The American Lung Association’s 2021 “State of the Air” report found that more than 40% of Americans currently live in places with unhealthy levels of ozone and PM pollution.

Fine particulate matter, or soot, is an extremely dangerous pollutant. It’s a deadly mix of metals, organic chemicals, and acidic substances that are so small they can be inhaled deeply into the lungs and enter the bloodstream. Soot comes from many sources, including fuel combustion and industrial processes that result in greater exposure for communities of color. In addition to increases in overall mortality rates, hospitalization rates, and emergency room visits, fine particle pollution is linked to many serious health harms including asthma, heart attacks, stroke, heart disease, COPD, Parkinson’s disease, dementia, low birth weight, preterm birth, and infant mortality.

There are ample peer-reviewed studies, including a number of important advanced studies the previous administration ignored in the last review, that clearly show that stronger annual and daily standards are needed and would save many lives. EPA’s data estimates that even if the air quality around the country met the existing fine particulate matter standards, 50,000 lives would still be prematurely lost, and a recent study estimated that fine particulate matter is responsible for between 85,000-200,000 excess deaths annually. 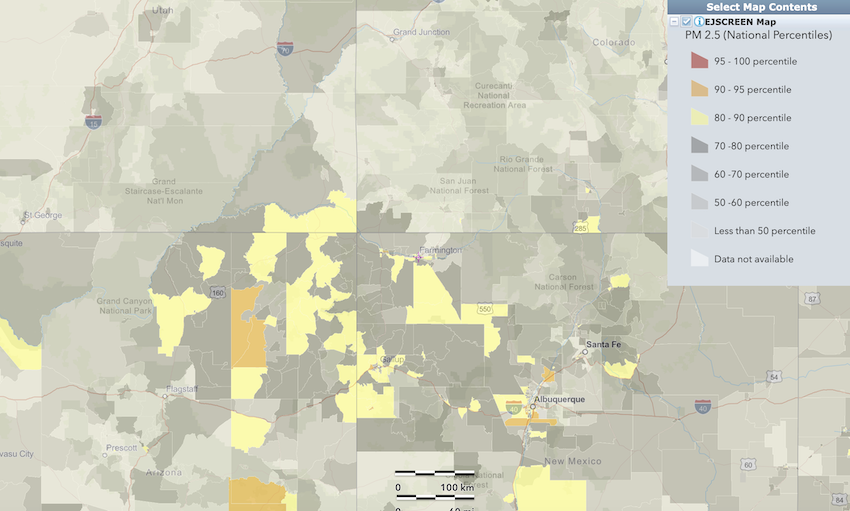 Ground-level ozone, or smog, is a result of industrial emissions from power plants, refineries, factories, and vehicle emissions combining with sunlight in the atmosphere. Ozone pollution can trigger asthma attacks and increase the risk of heart and lung diseases, particularly in children, older adults, and people who are active outside, like outdoor workers. When the national standard for smog was updated in 2015, EPA’s independent science advisors warned that it might not be adequately protective, and after six more years of research, there is increasing evidence that a more protective, science-based standard is necessary to adequately protect the health of our communities. Ozone is a secondary chemical reaction of volatile organic compounds and nitrogen oxides.  Many of the sources that contribute to ozone in San Juan County, New Mexico are industrial coal and natural gas facilities.  In 2021, San Juan County received an “F” grade in the American Lung Association’s 2021 “State of the Air” report (link to that report here).  San Juan County is at 95% of exceeding the ozone standard which is unacceptable given the continued proliferation of pollution sources which contradict the local initiatives being taken to transform the Farmington region into a diversified economic destination.

State of the Ozone in the Four Corners Region 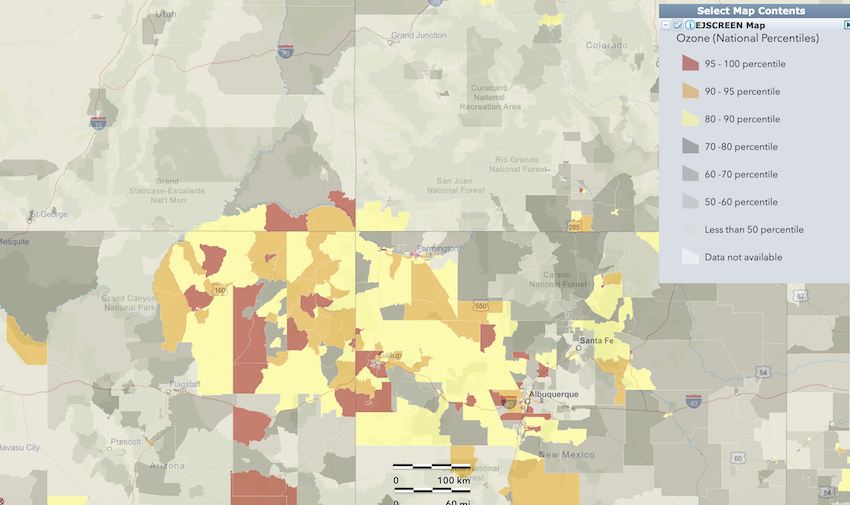 These pollutants do not just harm public health: they also damage the environment, diminishing breathtaking views, curbing tree and plant growth (including crops), and even damaging whole ecosystems. For well over a decade, EPA’s independent scientific advisors have made clear that these harms occur even at pollution levels the current standards allow. The science underlying those expert findings has strengthened over time, yet the standards have failed to keep up. Indeed, EPA’s 2008 and 2015 attempts at setting environment-protective secondary ozone standards were rejected in court because they violated the Clean Air Act and failed to rationally follow the science. Especially with climate change’s threat to our environment, it is long past time for EPA to set strong, independent ozone and particulate matter secondary standards that follow the evidence and protect the environment against these damaging pollutants. Every state is required by the Clean Air Act to develop a plan for tackling haze pollution this year. But too many states are poised to advance plans that fall far short.  States create these plans only once every decade – so now is not the time for half measures or delaying tactics.

In its last months, the Trump administration finalized its review of the national standards for ozone and particulate matter. The review process was seriously undermined by sustained curtailment of public participation as well as the sidelining of scientific input. Despite robust scientific evidence indicating that current standards are too weak to adequately protect Americans from the health and environmental harms of pollution, as well as strong public opposition to the anti-science proposals, the previous administration declined to strengthen these pollution protections and finalized do-nothing primary and secondary standards that fail to protect people and ecosystems.

We are calling on the EPA to prioritize fixing this major public health and environmental problem by reconsidering and updating these standards based on the latest available science. We urge the agency to draw on the advice of newly formed panels of independent experts regarding the health and welfare effects of these harmful pollutants. Finally, we need the EPA to move aggressively to finalize reconsideration of the particulate matter standards by summer 2022 and the ozone standards by winter 2022/spring 2023.

If you would like to learn more about this issue, consider attending the talk “Addressing the Unequal Burden of Air Pollution” hosted by the National Park Conservation Association Tuesday 6/15 at 3pm Mountain Time. The talk will have three experts, Dr. D Pei Wu, Environmental Scientist, Office of the New York State Attorney General, Carol Davis, Executive Director, Diné C.A.R.E. (Citizens Against Ruining our Environment), and Dr. Brian Moench, President and Founder, Utah Physicians for a Healthy Environment. We need stronger limits on air pollution here in the San Juan basin, and this is a once-in-a-decade opportunity to improve air quality at the state level!