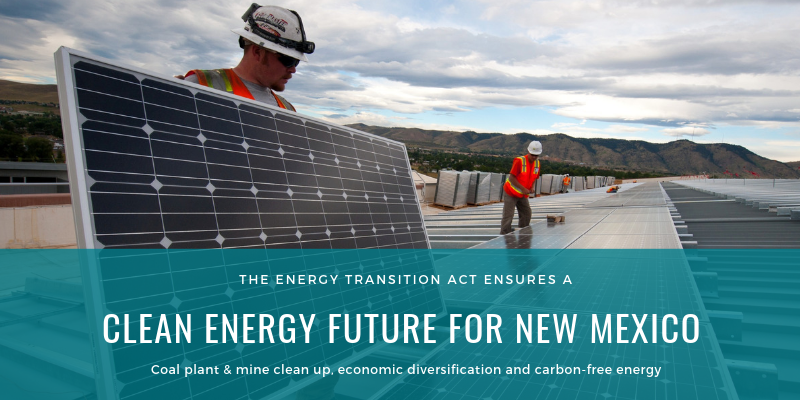 By Mike EisenfeldMarch 13, 2019No Comments

New Mexico just passed one of the most progressive energy transition bills in the country!

The Energy Transition Act (ETA), which just passed the house and now heads to the Governor’s desk, paves the way for a just transition to the new energy economy by funding the clean up of the San Juan Generating Station plant and Mine as well as economic diversification, while also committing the state to 100% carbon-free energy by 2045.

We worked hard to both help create and pass this bill along with many other organizations, agencies, and stakeholders. The San Juan Generating Station’s imminent closure made it critical that we carve an equitable path forward for our communities to thrive in its wake. We believe this bill does right for the workers, community, economy, and environment and look forward to continue our work on ensuring a just transition for San Juan County  New Mexico.

Santa Fe, N.M. (March 12, 2019) – Environmental, labor, and community groups today celebrated the New Mexico Legislature’s passage of the landmark Energy Transition Act (ETA), a measure that will boost renewable energy production, create jobs, retire the San Juan Generating Station, and diversify the economy in the Four Corners area.With the House of Representatives’ approval, the legislation now heads to Gov. Michelle Lujan Grisham’s desk to be signed into law. The governor has been a vocal proponent of the ETA, which will:

“Clean energy – not polluting and expensive coal – is the future in New Mexico,” said Mike Eisenfeld, a community organizer from San Juan Citizens Alliance who is based in Farmington. “Thanks to the ETA, our community will have the opportunity to participate in and benefit from this exciting transition, while receiving vital economic support and job training.”

“New Mexico is embarking on a new energy future – one that invests in affordable clean energy and completely decarbonizes our power sector,” said Steve Michel, the Santa Fe-based deputy director of the Clean Energy Program at Western Resource Advocates. “The ETA’s carbon-free and renewable energy goals are among the strongest in the country, allowing us to protect the health and well-being of New Mexicans, strengthen our economy, and tackle climate change.”

“This is a momentous day for New Mexico’s environment and our quality of life,” said Sanders Moore, executive director of Environment New Mexico. “We can meet New Mexico’s energy needs without sacrificing our clean air and water, and we applaud the New Mexico House of Representatives for passing this critical legislation.”

“New Mexico legislators heard voters loud and clear when we said we want our state to confront climate change head-on – and we applaud them for taking action.” said Demis Foster, executive director of Conservation Voters New Mexico. “The ETA will move New Mexico forward on climate change by leaps and bounds while reducing electricity costs, holding PNM accountable, and protecting communities and workers in the Four Corners area.”

“The ETA puts New Mexico on a path to real energy independence and supports communities with moving away from coal,” said Stephanie Maez, the executive director of ProgressNow New Mexico. “We are thrilled to see this legislation approved, making New Mexico the nation’s leader in renewable energy and protecting San Juan County miners and their families.”

“With the ETA’s passage, New Mexico can now equitably transition from coal to 100 percent carbon-free electricity,” said Camilla Feibelman, director of the Rio Grande Chapter of the Sierra Club. “This is a significant win for New Mexico ratepayers, our environment, and communities in the Four Corners region who will have new opportunities to participate in our growing clean energy economy.”

“We applaud New Mexico legislators for investing in invaluable 21st-century job training and apprenticeship opportunities,” said Brian Condit, president of the New Mexico Building Trades. “The ETA’s passage shows New Mexico businesses – and companies nationwide – that our state is open for business and committed to building a pipeline of skilled workers.”

Marcela Diaz, Executive Director of Somos Un Pueblo Unido, stated, ““The Energy Transition Act sets the course for new, good-paying jobs in the clean energy sector. Those jobs will help rural New Mexico and other parts of the state where unemployment remains high. We’re excited to work with the Governor and the state to make New Mexico the nation’s leader in clean energy jobs.”