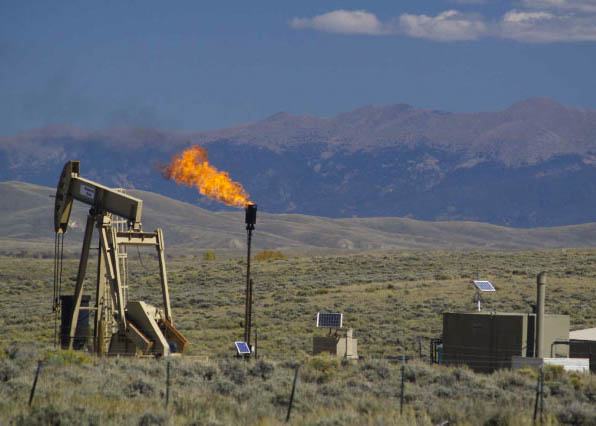 Today the Environmental Protection Agency finalized standards for dangerous oil and gas methane pollution from new infrastructure. These are the first-ever national safeguards limiting methane waste and pollution and will go far to protect public health, address climate change, and save money and resources. We still need to protect our communities from existing sources of this pollution, but this is a critical step forward. We look forward to reviewing the rules and will keep you updated.

Learn more about methane and how it affects the Four Corners:
www.sanjuancitizens.org/methane

Albuquerque, NM – Today, the Environmental Protection Agency (EPA) finalized standards for methane pollution, a component of natural gas, from new and modified sources in the oil and gas sector. These safeguards are the first-ever national standards for methane pollution, a greenhouse gas that is 87 times more potent than carbon dioxide in the near term.

This lost methane represents represents lost royalties to taxpayers. A recent report suggests New Mexico taxpayers have lost out on over $42.7 million in royalty revenue since 2009.  In New Mexico, 73% of registered voters support the upgrades that would reduce methane pollution. (For more information see New Mexico Methane Factsheet)

Today’s announcement is a critical element of the Obama Administration’s Climate Action Plan, which seeks to reduce methane emissions by 40-45 percent from 2012 levels by 2025.

“The identification of the Four Corners Region of the U.S. Southwest as a methane ‘hotspot’ is cause for alarm with a responsibility to reduce documented high oil and gas facility methane emissions. The EPA rule is important for northwestern New Mexico to balance energy development with protection of resources and public health, and larger-scale economics of a region dependent on tourism,” said Mike Eisenfeld, Energy and Climate Program manager of San Juan Citizens Alliance in Farmington, New Mexico.

“The new EPA rule capturing methane pollution is an important step in lowering greenhouse gases and meeting the moral obligation of the UN Paris Climate Agreement. It is also a way to care for the health of our brothers and sisters and future generations,” said Sister Joan Brown, OSF, executive director of New Mexico Interfaith Power and Light.

“The EPA is taking a first step toward helping the oil and gas industry capture a potent global warming gas that is economically valuable. Reducing methane waste is good business and makes good neighbors of industry. We are thankful that the Obama administration and Sens. Udall and Heinrich and Reps. Lujan Grisham and Luján support these rules and see that what’s good for business and jobs is also good for the environment,” said Camilla Feibelman, director of the Rio Grande Chapter of the Sierra Club

“Methane pollution and toxic chemicals from the oil and gas industry can make smog worse, trigger asthma attacks in children, and cause cardiovascular disease and even premature death,” said Molly Sanders, CVNM Education Fund Program director. “We applaud the Obama administration and EPA Administrator Gina McCarthy for taking a strong first step toward better protecting the air we breathe now and for future generations. We urge fast action to finalize rules that address methane pollution from existing sources, which is currently impacting the health of New Mexicans.”

“EPA’s announcement of a final rule on emissions of methane, a climate super polluter, from new oil and gas operations sets in place a key piece of the Obama administration’s efforts to tackle climate change,” said Thomas Singer, Ph.D., senior policy advisor for the Western Environmental Law Center. “Oil and gas is the largest industrial emitter of methane. This rule closes gaps in earlier EPA rules by covering oil well drilling, leaks and other equipment that releases methane. EPA predicts that by 2025, these rules will cut the climate pollution equivalent of 1.7 million cars’ annual emissions.”