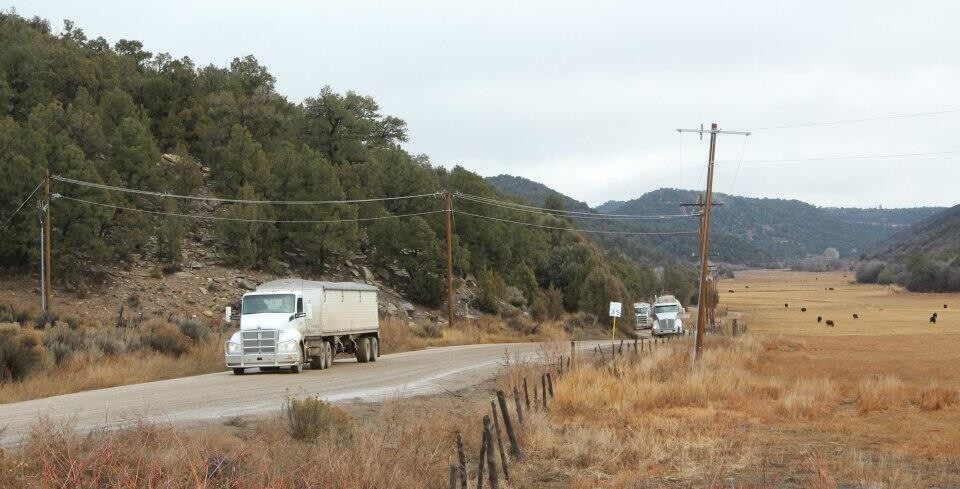 This post is the third in a four-part series on the King Coal Mine in Hesperus written by guest contributor Lauren Pope. Read Part I, and Part 2: The Impacts.

At a time when world changing technological advances – hybrid cars, text messaging, wireless internet, or photovoltaics for example – were rooting-in at the start of the 21st century, lessees of the King Coal Mine desired to expand operations. In general, energy source development was transitioning away from coal and towards cleaner fuels, but like the countless other whimsical attachments to the past inherent in the West’s culture, mine operators wanted the mine to remain open. Coal energy, like Victorian frocks, should have run its course and gone out of style by now, however, adjacent to the mine was another coal supply too large to let go.

In the late 1990’s the mine’s coal seam under lease was reaching its limits of output. The Bureau of Land Management (BLM) received a lease application from mine operator National King Coal for multiple lease modifications (the permitting terminology for mine expansions) and responded with Environmental Assessments (EA) in 1996, 1999 and 2001.

The 2001 EA found no actions “significantly affecting the human environment” and noted “the BLM actively encourages and facilitates the development of private industry of public land mineral resources…and environmentally sound exploration, extraction and reclamation practices are provided.”  As a result the BLM approved the expansion and put the 1304.51 acres up for a competitive lease sale.  When GCC Energy took over National King Coal’s operations in 2004 they “picked up” the BLM leases without further environmental analysis, despite it’s operation being approximately two miles away from the existing coal operations on which the environmental analysis was based.

In 2006 La Plata County determined they had no jurisdiction over the GCC operation that mined federal coal beneath state lands, although county roads were heavily utilized as haul roads for the mine.  GCC ramped up production in 2007 with the opening of King Coal II (both King Coal I and II operated simultaneously for more than a year), churning through the available coal more quickly. In 2010 they requested still another expansion, this time of about 950 acres. La Plata County then reversed its prior decision, notifying GCC they would require a county land use permit.  Approximately 2 years later GCC submitted its Class II permit and public notice went out to the mine’s neighbors.  As of May 2015, 5 years after the permitting process was initiated, GCC is still operating without a La Plata County permit.

As the county permitting progress grinds slowly forward, the EA for the 2010 expansion request is also moving on a slow conveyor belt. Initiated in 2010, the EA’s public comment period for the “scoping” of possible issues of concern and impact opened for 30 days in late 2012, closing on Christmas Eve day. Though scoping closed almost 2 ½ years ago, the draft version of this EA has yet to hit the streets.  It appears that GCC’s initial expansion request will not be answered until the 5-year waypoint from the initial request.

Meanwhile, GCC has approached the BLM for a drilling exploration permit to examine the coal reserves under about 4,900 acres, mostly north and west of the current operation.  Most of this area is private land with some smaller parcels of BLM interspersed. The BLM opened the public comment period for this exploration request for (hope you weren’t out of town!) 2 weeks, closing it on October 27, 2014.  This permit appears to be in the (relative) fast lane for BLM permitting and the Draft EA may very well be released to the public before the close of 2015.

As set by the National Environmental Policy Act, when an EA determines a project is causing significant social or environmental impact, a more thorough Environmental Impact Statement (EIS) must be completed. This requires a deeper analysis and an examination of the project, including exploring alternatives and mitigating actions for avoiding or minimizing adverse impacts. With an outdated and irrelevant EA (2001) and far too many years of unpermitted disruption in the Hay Gulch area, residents are calling for an EIS and for county authorities to finally back them up with both adequate county permitting and an insistence on requiring an EIS for federal mine expansion permitting.

The EA is based on outdated production numbers that do not reflect actual daily impacts on residents. In 2001, the output of King I was 264,676 tons of coal. Last year the expanded King II pulled out 970,790 tons. Traffic in 1999 was 18-28 trucks daily. Now it’s as many as 240 trucks passing residences daily (120 x 2). Water, sound and air quality issues were glazed over in the 14-year-old EA, yet residents report significant trends towards worsening impacts. GCC wants to significantly bump up their water intake from the aquifer with multiple wells putting dry-side residents (many of whom depend on domestic wells) at an even greater risk of losing their water supply.

The dramatic difference in mining operations (approaching four-fold) from the timeframe of the existing EA to GCC’s current operational size should be an absolute determinant for reconsideration of the project’s impacts. The Colorado Division of Reclamation, Mining and Safety (DRMS), which operates through an agreement with the federal Office of Surface Mining. issued GCC their current 5-year state and federal permit (the state has “primacy” in this permitting and oversight process) that expires in August 2017. Certainly “all eyes” will be on the state agency to step up their regulatory responsibility considering the huge expansion of the operation – a reality that DRMS seems to have missed when they approved GCC’s current state permit in 2012.

Nearby residents are understandably frustrated that after two decades of operation, the environmental and social impacts of the mine have not been adequately addressed or mitigated.   Residents are becoming increasingly vocal, starting important conversations with organizations that have authority over the mine. A concerned citizen group has been formed (helphaygulch@gmail.com) and not a public meeting goes unattended. In the next and final post on this issue, we’ll hear from residents about the future of King Coal II and their neighborhood.