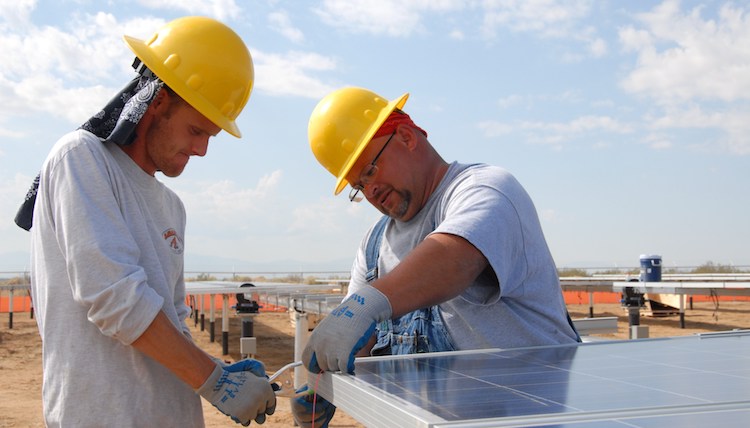 PNM must do right by Four Corner communities, citizens and workers

By Mike EisenfeldJanuary 29, 2018No Comments

A major tenet of our work over the past decade has been that coal-fired power plants in the Four Corners region have exerted an enormous toll on human public health and natural systems (air, water, land). It is now apparent that coal-fired power plants can no longer compete economically and the retirement of the San Juan Generating Station in Waterflow, New Mexico is forthcoming sooner than thought. As San Juan Generating Station closes down, it is essential that our communities seek an orderly transition to a diversified economy more reliant on sustainable energy, particularly solar.

This will require community leadership, exemplified in this OpEd by one of our longtime members, Gordon Glass. This originally appeared here in the Farmington Daily Times on January 28th.

As a longtime citizen of Farmington interested in the continued wellbeing of our families and communities, I have been involved in many discussions and meetings with respect to our energy economy and our environment. There has been a tendency to divide these two issues, and to create tension rather than resolution to challenges we face.

There are two bills in the 2018 New Mexico Legislative Session, House Bill 80 and Senate Bill 47 for Public Service Company of New Mexico (PNM) titled “the Energy Redevelopment Bond Act”. The House Bill is sponsored by Rod Montoya of San Juan County and Bobby Gonzales of Taos County. The Senate Bill is sponsored by Steve Neville of San Juan County and Jacob Candelaria of Bernallilo County. I want to make sure that our community is aware of these fast moving bills in the short 30-day legislative session.

These bills confirm that PNM is closing the San Juan Generating Station (coal plant) in the Four Corners area piece by piece, with a final shutdown scheduled for 2022. The impact of the coal plant retirement to Farmington will be severe. As New Mexico’s single largest polluter, it’s time that the San Juan coal complex be shut down – but our communities need a just and orderly transition away from coal. PNM’s reason for shutting the San Juan Generating Station is based on economic factors.

PNM’s bills protect PNM’s losses from the plant, but, do not do justice for other impacted parties–the families who work in the plant, the families who live in the Four Corners area and are deeply impacted by the closure, local cities, San Juan County, and Central Consolidated Schools, who stand to lose millions of dollars in property tax and related revenue. In addition, Dine College and San Juan College should receive additional resources for job retraining and further education, including renewable energy.

In exchange for PNM being able to recover its losses, there are three things the company should do in exchange, to do right by communities in the Four Corners area and citizens/ratepayers in other parts of the state.

First, PNM should use some of the proceeds from the bills to assist with the economic transition that this region needs. That means PNM should provide direct financial assistance to San Juan County communities; severance packages to families of Four Corners area coal workers, including long term health insurance; funding for job training in clean energy and new startups; and support for diversification in the Four Corners area.

Second, San Juan County has been a cornerstone of energy production for decades and there’s no reason to think we can’t still be. The Four Corners area is perfect for large scale solar energy, and we have an advantage that other places don’t: transmission capacity from the San Juan Generating Station. These bills need to include a mandate that the power generated from coal is replaced, in large part, by solar energy from this same area.

Lastly and importantly, PNM must ensure that citizens across New Mexico don’t bear the brunt of its poor business decisions.

There are efforts underway by civic leaders to revitalize our region through increased tourism and outdoor recreation opportunities, improving infrastructure, and market local amenities. These are great first steps to ensure a sustainable economy and future direction for the citizens of our region. The Energy Redevelopment Bond Act bills concern a monumental decision by PNM to close San Juan Generating Station. The 2018 legislative session may not provide adequate time for real consultation with our impacted communities in the Four Corners region.

If PNM and its bill sponsors are true to their word, they will provide resources for economic development, a commitment to solar power from the Four Corners, and an assurance that citizens/ratepayers aren’t harmed as part of their proposed legislation. Otherwise, northwestern New Mexico families will suffer.