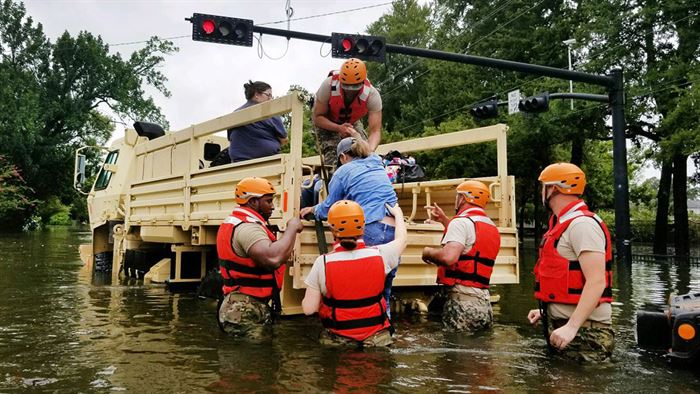 Hurricanes are a stark reminder of the costs of climate change

As we stand transfixed by the enormously powerful hurricanes churning across the Caribbean and Gulf of Mexico, one can’t help but think about our place in the climate-change continuum.

The San Juan Basin is one of the richest fossil fuel basins in the world. We’ve extracted and burned coal, oil and natural gas for decades, exporting those for energy over electric transmission lines and through pipelines. Every year, our fossil fuels inject millions of tons of carbon dioxide into the atmosphere as they are burned.

We know from basic physics and chemistry that more carbon dioxide traps more heat in the atmosphere, with predictable outcomes such as warmer oceans.

There are a couple of responses to our changing climate. Adaptation means just dealing with what comes, and enduring floods and storm surges, and perhaps building bigger sea walls and shelling out billions to rebuild after each catastrophe.

Perhaps your preference – mitigation or adaptation – reflects your worldview, whether you plan ahead or fly by the seat of your pants.

Hurricanes Harvey and Irma unleashed billions of dollars in damage. Will it be enough to alter ideological stances against addressing the inputs to climate change?

One of the motivations for those unwilling to grapple with humanity’s responsibility for climate change has been an aversion to presumed costs of transitioning off fossil fuels, though as we know from the rampant abandonment of coal by utilities all across the country, it’s now cheaper to get electricity from renewable sources. But even if one abhors government intervention to moderate climate change, the simple dollar and cents calculations of inaction compared with inoculation are growing so large as to be inescapable.

Harvey and Irma caused hundreds of billions in damage and economic impacts. Cost estimates just for Harvey start about $50 billion in destruction and range up to almost $200 billion for economic impact. At what point does it still make sense to argue against any expense to rapidly shift away from fossil fuels but continue to endure catastrophic hurricanes that unleash damage exceeding hundreds of billions, not to mention the cost in lives.

Will Harvey and Irma change the minds of Greg and Rick? The governors of Texas and Florida have been adamant in their denials of climate change. Now, as they stand with hands out waiting for billions in taxpayer rescue funds, and as individuals and businesses and insurers grapple with billions in losses, will the bottom line accounting of the costs and benefits of proactive climate-change action finally make sense?

Which brings us full circle back to our situation in the San Juan Basin. We can’t help with sea walls and levees, but we can reduce our fossil fuel footprint. That starts most immediately with where we get our electricity, and the choices made by La Plata Electric Association and Tri-State.