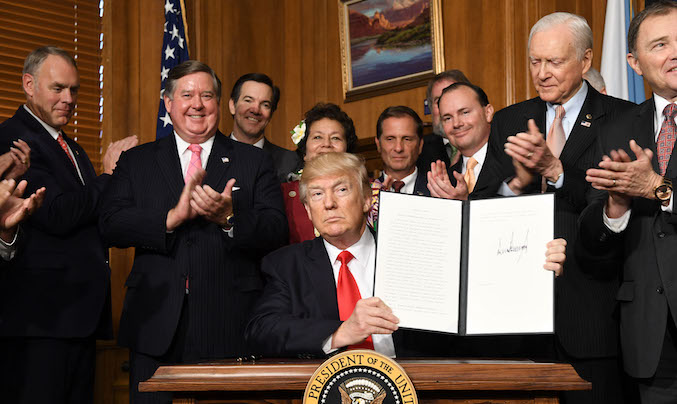 Last week, the House of Representatives Natural Resources Committee passed a bill to prevent presidents from creating national monuments. It would severely limit the future preservation of many remarkable places similar to those we now take for granted – such as the Grand Canyon and most of Utah’s current national parks, including Zion, Bryce and Arches.

The bill would enshrine into law the ideological perspective of Utah’s congressional delegation, that states are supreme in deciding how our national public lands should be administered. The bill’s passage is the culmination of a decade-long campaign by Rep. Rob Bishop, the Utah official most familiar for his unrelenting opposition to Bears Ears National Monument and Grand Staircase-Escalante National Monument. This time around, Bishop has convinced our own congressman, Scott Tipton, to favor local control over national interests.

That’s the crux of the issue – who controls the millions of acres of federally-owned, national public lands across the West. Bishop insists it should be the states, or better yet from his perspective, counties. Hence, in the debate about whether or not to protect Bears Ears National Monument, Bishop would grant San Juan County commissioners in Blanding final say over the fate of these national lands.

Bishop’s bill effectively eliminates the Antiquities Act, a law passed in 1906 to give the president the ability to act quickly and unilaterally to protect areas with scientific and culture resources. It was motivated by a consensus around the need to protect rapidly vanishing cultural resources in the Four Corners and came full circle with President Obama’s action to protect just those cultural resources in Bears Ears at the end of 2016.

Bishop has insisted Utah should be the ultimate arbiter about whether Bears Ears deserves protection and yet used his congressional power to stymie legislation for years. Obama countered that national lands owned by everyone should not be held hostage by a single recalcitrant state, and the larger national interest dictated protection of Bears Ears as a national monument.

The tug of war between state control and national interest is hardly new. In 1781, even before our Constitution existed, the critical role of federal land ownership was established to equalize the playing field. Some states, like Virginia, claimed vast tracts of former British crown lands all the way to the Mississippi River, while others, like Maryland, had no land claims. Only because Virginia and other states ceded their land claims under the Articles of Confederation to the nascent federal government to be managed for the national benefit were our founding fathers able to reach agreement on the creation of our country.

Why does it matter who controls our public lands today? Utah’s desire to sell its state lands to the highest bidder provides a stark example of the divide in management philosophy. In the last few years, Utah has auctioned prime land on Comb Ridge outside Bluff and property at the entrance to Canyonlands National Park. Our national lands, like those comprising Bears Ears National Monument, are managed for a wide variety of purposes – cultural resource protection, recreation, wildlife, livestock grazing and more – unlike Utah’s state lands that have the single purpose of maximizing revenue.

Who will prevail – proponents of local control or those advocating the greater national interest? Should Bishop and Tipton discount our views simply because we live an hour or two distant, outside the arbitrary boundary that defines the Utah-Colorado border? And what about Native American tribes? Will the voices of today’s Puebloan peoples be ignored just because they don’t currently live in Utah as their ancestors did 1,000 years ago?