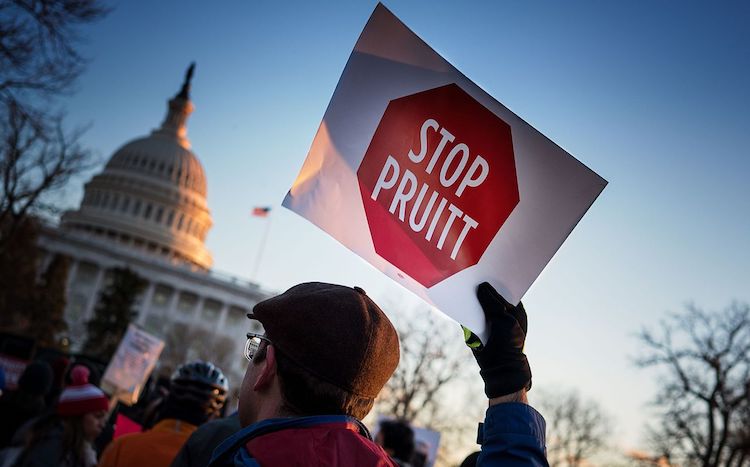 By the time Scott Pruitt resigned as the Environmental Protection Agency’s administrator, he was the poster child for bungling personal entitlement. As Republican Sen. Joni Ernst of Iowa put it, Pruitt was the swampiest of the Washington, D.C., swamp creatures.

Pruitt’s personal foibles overshadow the real damage that occurred under his direction to the nation’s environmental protection. Pruitt created the culture to launch far-reaching efforts to reverse decades of environmental improvement to America’s water and air quality. Those unrelenting assaults will likely continue under Pruitt’s replacement, a lower-key bureaucrat with less attachment to the perks of government.

Pruitt was under a dozen investigations and ridiculed for his attachment to first-class travel accommodations on the taxpayers’ dime, his $43,000 phone booth installed in his office and his amateurish efforts to score a high-paying job for his wife by dint of his role at the EPA. Don’t let that obscure what’s happening under the radar by more competent ideologues intent on removing perceived impediments to industry.

One such attack is EPA’s plan to roll back fuel economy standards for automobiles and trucks. When vehicles are more efficient and burn less gas per mile, you also reduce pollution. It’s a win-win that saves people money on gas while cleaning up the air. Yet, the Trump administration’s EPA viewed this as an unreasonable requirement on industry, which is odd because even automakers like Ford and Honda are satisfied with the rules and see no reason to roll back efficiency requirements.

In another rule change, particularly relevant locally, EPA intends to abandon rules to protect communities and waterways from the impacts of coal-ash waste. This is the leftover waste after coal is burned at power plants, and large plants like those in Farmington have enormous piles of coal-ash waste. Now, EPA plans to cut requirements against leaving this waste in unlined pits and reduce the frequency of testing for groundwater pollution.

The waste contains concentrations of mercury, cadmium, arsenic and other heavy metals that can pollute waterways and cause illness, particularly to nearby residents. The motivation is to reduce compliance costs to industry, not to protect the environment or people’s health.

Another wonky-sounding rule change is one that would revamp the rules for preparing environmental impact statements. When one talks about how to apply the National Environmental Policy Act, it’s easy for eyes to glaze over. But this is fundamental to open and transparent government decision-making. Environmental impact statements can be long and technical, but they are intended to unveil consequences of development and to inform decision-makers how to make better decisions.

A real-world example of these NEPA regulations in action is the controversial Village at Wolf Creek development atop Wolf Creek Pass. The requirements for complete and thorough documentation of environmental and social impacts have thus far stymied efforts by the Texas developers to ram through their project. It’s not hard to see why developers and their agents would like fewer rules for analysis of their project impacts. The EPA’s rule change would gift developers like these the necessary leeway to sneak through their projects with a lesser level of scrutiny.

The EPA is now under the thumb of a new acting administrator, Andrew Wheeler, a former lobbyist for the uranium and coal industries. Wheeler presumably will avoid Pruitt’s ethical pratfalls and keep a lower profile. And while Pruitt’s ethical entanglements made for entertaining press, they also overshadowed the destructive policies undertaken by the Trump administration. Maybe the focus will now be on the meat of the policies and less on the corruption of those pursuing them.