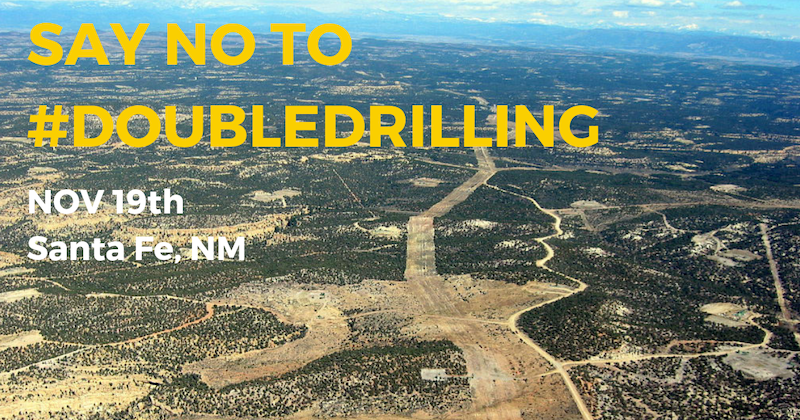 As you may have heard, Hilcorp is requesting approval from the State of New Mexico’s Oil Conservation Commission to double the density of allowable wells in the Blanco-Mesaverde Gas Pool in San Juan and Rio Arriba Counties. That could mean an additional 8,000 new wells and recompletions in northwest New Mexico.  Communities in San Juan and Rio Arriba counties already are overwhelmed by oil and gas. Northwestern New Mexico is home to more than 40,000 oil and gas wells as well as ancillary compressors, processing plants and pipelines.

No analysis has been done on the impacts of  doubling the well density. We’re additionally concerned because approval of this request would circumvent the current public process required when an exemption to the well density is requested.

Come to the meeting! Speak out against this request! There will be apublic hearing on the issue November 19th where the New Mexico Oil Conservation Commission will be making their decision. The public is invited to provide comment and San Juan Citizens Alliance will again be attempting to persuade the commission not to approve Hilcorp’s request. It is critical for the commission to get feedback from the public.

Can’t make it? Submit comments against the proposal to florene.davidson@state.nm.us. Below are some suggestions for talking points. Please edit and adapt as you see fit.

These are some suggestions for public comments either in person at the hearing or to submit via email to florene.davidson@state.nm.us.

As a public agency, NMOCC has both the regulatory authority and the duty to consider the concerns of the public about applications brought forth before the commission.

The Bureau of Land Management’s 2003 Resource Management Plan for the Farmington Field Office is out of sync with this proposal for double drilling in the Blanco-Mesaverde gas pool. This proposal warrants a new process of comprehensive environmental review and public consultation to ensure that any negative impacts to communities, correlative rights, environmental and cultural resources are mitigated.