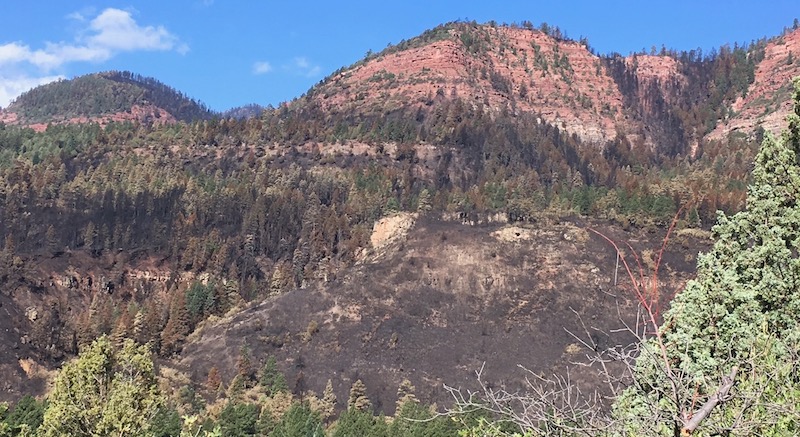 As we breathe a collective sigh of relief after the prolonged and mostly gentle rains that calmed the fire and cleansed the air over June 16-17, we can begin to assess the 416 wildfire from a couple steps back from the fire line. We need to acknowledge, however, that the 416 is yet to be contained, meaning structures and the well being of firefighters are still at risk until full containment. We must also express our deep gratitude to the hundreds of firefighters and other specialists who, through skill, patience and determination, have amazingly managed to contain the 416 to prevent loss of life and structures – thank you!!

First, the 30,000-foot view. Yes, fire is absolutely an elemental part of forest ecology and, for the most part, the forest is going to regenerate and do its thing without any help from us. Our role is to continue protecting people and structures from flooding, debris flows and the risk of future fires in the wildand-urban interface (WUI).

Living and working in Colorado forests comes with a certain amount of risk. Proactive and science-based management of forests in the WUI and creating defensible space around homes and businesses is therefore a responsibility we must take seriously. Remember, the forest was here first. We moved into its home, not the other way around. In the hotter and drier conditions we’ve exacerbated with climate change, the risks have increased.

While we know some basic information about the fire, mostly there are scores of questions to be pursued in order to address both the short term challenges, such as flooding, water quality concerns and burned-area hazards, as well as the long term ones, such as the efficacy of fuel treatments in the WUI and prescribed fires somewhat deeper in the woods.

This first blog will address some basic forest and fire ecology we think helpful to understand as we gather more information about the 416 fire. We’ll address other issues in future blogs. If there are specific topics you are interested in, please post a comment below.

We do know that within the 50+ square miles of the 416 fire perimeter there is significant forest acreage that was unburned, a percentage yet to be determined. Essentially, most wildfire burns resemble a mosaic, as fire is influenced by numerous variables, such as topography, aspect, soils, vegetation/forest type, burn history, fuels condition, weather during the fire and so on. All of these factors that together create the post-burn mosaic also influence the fire (or burn) severity within the fire perimeter. The headline photograph above as well as the picture below show what this mosaic looks like. They were taken from County Road 201 in Hermosa near the forest closure and demonstrate the patchiness of burned areas as well as the variety in burn severity. For a more expansive view, you can check out our 15 second video here. 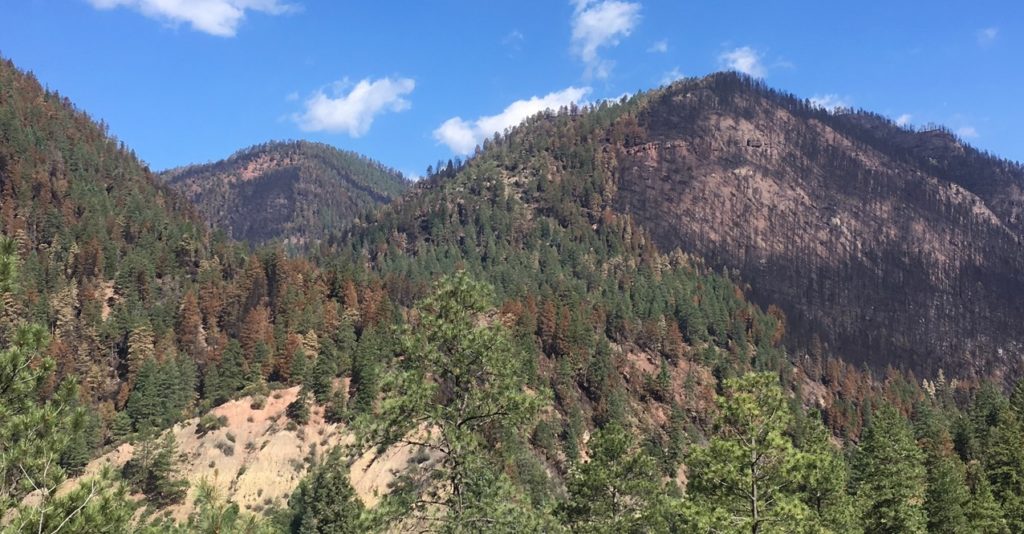 Fire severity, generally mapped as low, medium or high, will be found to vary greatly across the 416 fire perimeter. Initial peeks into the burn indicate that high severity areas do exist and some are located on slopes where the fire ran hot and uphill – a behavior at which wildfires excel. And certainly there are locales where the fire was less severe, burning relatively cooler due to such factors as reduced fuel loads, benign weather, and/or downhill slopes. It will take a few weeks before the Forest Service and its partners can map and share a fire severity map with the community, but it will be a critical informational tool for us to better understand the “burn mosaic” including which areas were burned to what degree of severity.

The fire severity mapping will enable us to anticipate (though certainly not to predict) such possibilities as flooding, prospects for debris flows, the timeframe to reach some level of stasis per erosion events, vegetation regeneration response, and more. Frankly we are hoping that the fire severity mapping will reveal a relatively low percentage of high severity acreage (such as 10%) rather than a high number because the watersheds impacted by 416 are interwoven into the economic and social web of our community. Remember that wildfire is a natural phenomenon and is ecologically beneficial to the forest, but like some other natural and human behaviors “too much intensity is sometimes a problem” – especially if the fire burned more in the “frontcountry” than “backcountry.” In sum, we are awaiting the formal Forest Service assessment of fire severity to boost our understanding of the fire event and its “progeny.” We’ll report on that once it comes out and we have a chance to review it.

As noted above, a couple important components of the fire severity puzzle are the vegetation/forest types that fueled the fire and the localized history of forest disturbance, whether it be fire, disease, wind events or insect infestation. While we don’t yet know the fire severity, we do know which forest/vegetation types were within the 416 perimeter as both federal and state agencies have mapped such in a detailed manner (see below). That, combined with knowledge of past disturbance events, allows us to make some general assumptions at this point regarding possible burn severity.We must remember, however, that aspect, slope, weather, and so on all contribute to the fire severity reality.

The vegetation/forest classifications within the 416 burn area are mountain shrubland, ponderosa pine, warm-dry mixed conifer (usually growing on warmer/dryer aspects than its brethren cool-moist mixed-conifer), cool-moist mixed conifer, aspen and spruce/fir. The 416 will have traversed the entire scope of major veg types except for the PJ (pinyon-juniper) down low and the alpine tundra up high. Certainly riparian and wetland areas also burned, and aspen stands that we knew were vulnerable in these wickedly dry conditions, also . 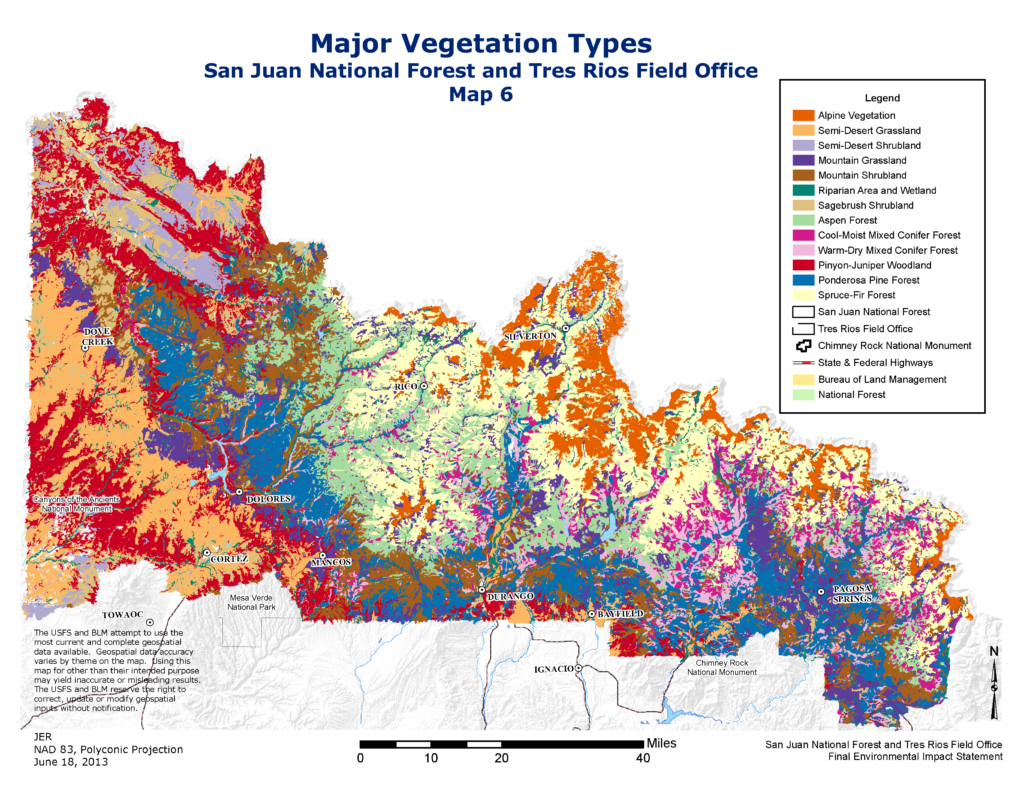 Some of our forests, notably the ponderosa-dominated sector, is a fire-adapted forest. Ponderosa forests in our corner of Colorado benefit from the wildfires they have co-evolved with over the millennia. In general, prior to humankind’s vigorous fire suppression realm over the last century or so, ponderosa pine forests burned at roughly 5 to 20 year intervals. These fires, which were more often–than-not of low severity, reset the ponderosa forest for resistance from fires with long-flame length (old ponderosas lowest-to-the-ground branches are dozens of feet above ground), set-up perfect conditions for regeneration, opened forest canopies and created meadows, and otherwise promoted a “ponderosa first” situation. If you have hiked into the Hermosa Creek watershed from the southern trailhead you have walked through these magnificent stands of rotund and towering ponderosas.

While the ponderosa forest evolved in a tight relationship with wildfires, other forest types evolved with a very different relationship to disturbance events such as fire and insect outbreaks. The spruce/fir forest is one of those. In general terms, disturbance cycles within the spruce/fir forest are not common, but when they do occur, they can “go big.” As such, we are likely to see some of this within the 416 perimeter where some of the spruce/fir forest will have burned extensively and with high severity. The spruce/fir forest has historically not been particularly vulnerable to fire events with their fire interval being counted in centuries rather than years due to its general characteristics of being high, cool and moist. However, with the drying and warming climate (from a long term perspective) and with the exceptional drought conditions (of the short term perspective) we know that the 416 fully engaged the spruce/fir element of the forest.

Optimally our federal, state and private land forest stewards manage forests to enhance their resilience. Resilience is a complex topic within forest ecology and we will explore it further in future SJCA forest and fire blogs. At this point in time we need to be patient and wait for more in-depth post-fire assessments to better understand the dynamics of the 416 and it’s nearby western sister the Burro wildfire. Meanwhile our community should concentrate on our own resilience as we deal with displacements, economic hardship and coming to grips with a changed forest landscape. With it’s proximity to homes, businesses and infrastructure the 416 fire spawns many questions that our community should engage, including those related to land use planning, building codes, travel restrictions, WUI development, infrastructure design and more. It will be a stiff challenge to measure up to the inherent resiliency of our neighboring forests, but we know we can pull together as a community to design and create an enhanced resilient future for both our human and natural communities.