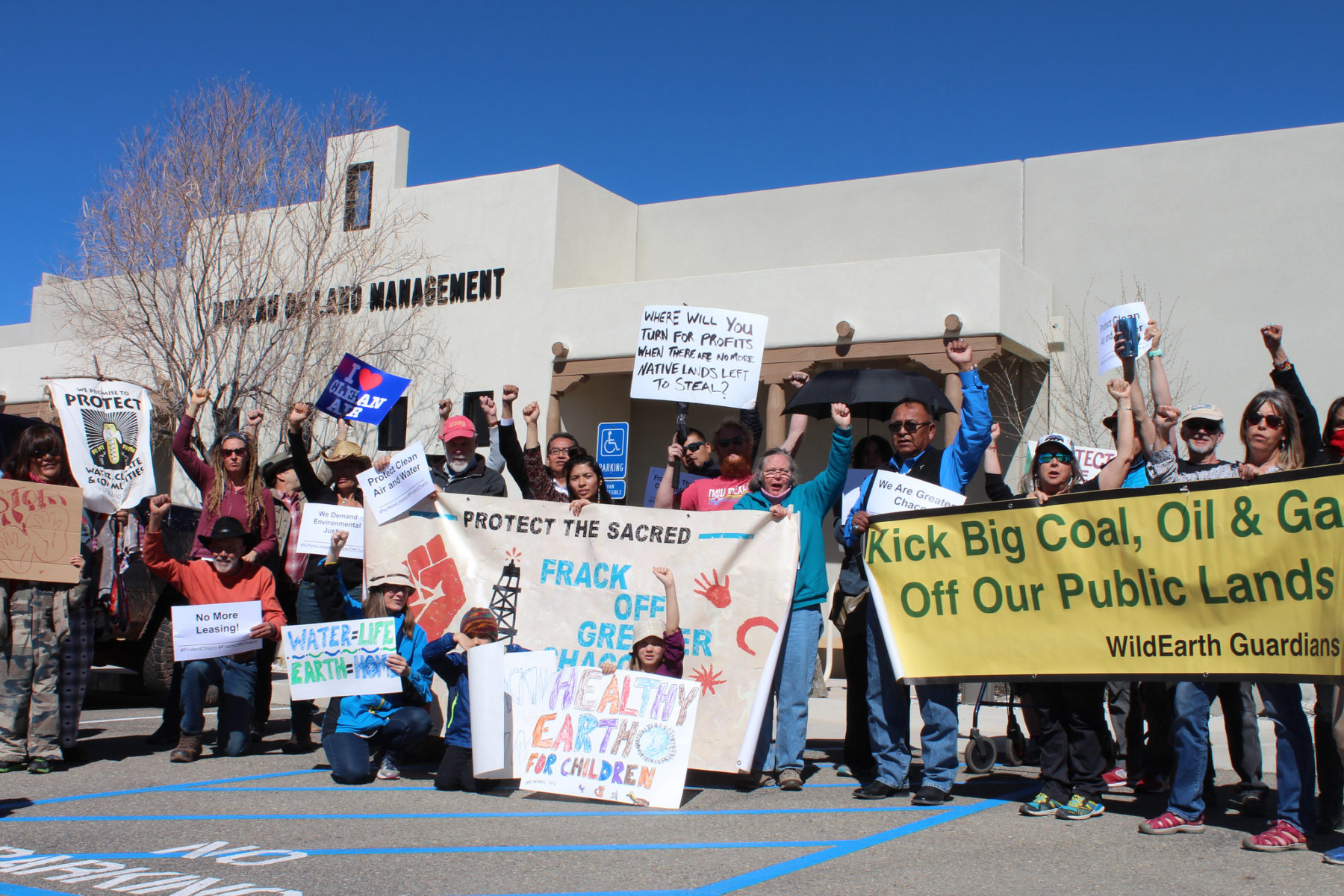 “This lease sale is just another example of the BLM putting the cart before the horse. We’ve been waiting for years for the BLM to complete its Resource Management Plans for the Greater Chaco. But the agency continues to allow new fracking wells without first conducting a robust assessment of how this development affects communities, cultural resources, the environment, and the climate.  There has been a clear lack of consultation with impacted communities about oil and gas development in the region. Today we’re taking a stand once again to say that’s not right.”

Santa Fe, N.M. – Crowds gathered today for a climate strike in front of the Bureau of Land Management (BLM) state office in Santa Fe to protest the lease sale of 11,000 acres of public and ancestral tribal lands in Greater Chaco and Greater Carlsbad regions. The BLM is moving forward with this controversial lease sale despite having received over 33,000 protest comments from tribal leaders, environmental groups, and members of the public expressing concerns that the sale would have negative impacts on cultural resources, public health, and the climate.

“How many more of these lease sales will we have to protest and comment on?” said Navajo Nation Council Delegate Daniel Tso. “The BLM hasn’t completed the required cultural resource studies, and hasn’t consulted the Diné community members in the areas that industry has selected for their resource development. We are the first holders of the land, yet we are the last to be given notice. Pure water is more valuable than the oil and gas that is locked and tightly held by our Earth Mother. She’s saving the precious gift of life – water –  for the generations of our people. The mega corporations cannot be allowed to sustain themselves at the cost of our future generations. There has to be a balance point: people over money.”

In striking for the climate, protesters drew the strong connection between oil and gas leasing and climate change. Building on energy galvanized by the 1.4 million people who marched March 15 during international school strike for the climate, today’s action also highlighted a recent precedent-setting federal court decision in which a federal judge halted a lease sale in Wyoming because the BLM failed to account for the climate consequences of selling public and ancestral tribal lands for fracking.

“BLM chronically fails to analyze the total costs of its drilling program to climate change, culture, or community health,” said Rebecca Sobel, Senior Climate and Energy Campaigner for WilldEarth Guardians, the lead plaintiff in the recent court ruling. “The federal oil and gas leasing program already accounts for more than 25% of U.S. climate pollution, and what do we have to show for it besides more intense climate disasters? While New Mexico’s oil and gas production has increased, the state still ranks lowest in the nation for child poverty, education, and welfare.”

The vast majority of lands managed by the BLM in the San Juan Basin of Greater Chaco and in the Permian Basin around the Greater Carlsbad area are already leased for oil and gas development. While residents have been experiencing the impacts of resource extraction for decades, the BLM has failed to take a hard look at the cumulative effects of development for communities, the landscape, and the climate.

“BLM has repeatedly ignored the concerns of tribal leaders and impacted community members as the agency continues to permit fracking activities they’ve failed to analyze or mitigate,” said Miya-King Flaherty, Our Wild New Mexico Organizer with the Sierra Club Rio Grande Chapter. “Communities have been forced to bear the burden of funding health assessments and documenting the health impacts of fracking because BLM refuses to do its job. Until the BLM stops prioritizing oil and gas development above all else, the public will continue to speak out and demand stronger protections.”

Check out WildEarth Guardians’ map of the March 2019 lease sale.

This press release can be found in its entirety on WildEarth Guardians’ website here.