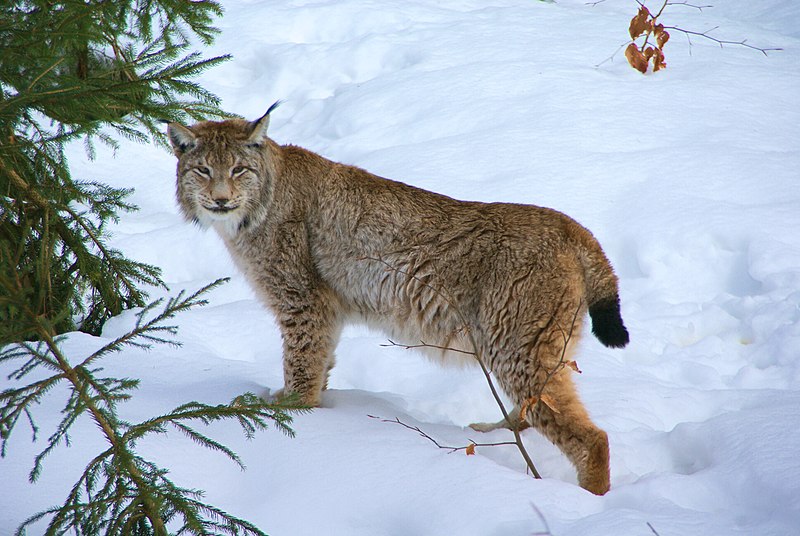 By Jimbo BuickeroodJuly 2, 2020No Comments

Purgatory has shown an interest in developing the Ice Creek lift pod (at the eastern extent of greater Hermosa Park) area for many years and sought to include it an element of their Master Development Plan (MDP) during its creation more than a decade ago.  Though it was dropped from the MDP (as explained below,) the resort has renewed interest as they desire to expand their beginner ski terrain while severing their use of the current beginner zone that has increasingly poor snow conditions related to our warming winters. There may well be alternatives to the resort’s specific interest in the Ice Creek Pod, but unless the Forest Service insists on a transparent assessment of such possibilities, we may never know.

As a monitoring component of the Canada lynx reintroduction effected beginning in 1999, radio-collared lynx indicated that the Purgatory region was a favorable area for this rare native species.  Though lynx denning information is generally not available to the public, lynx travel data indicates that lynx are commonly in and/or moving through the Ice Creek area, as evidenced on the map to the right.

There is plenty of anecdotal proof as well, and for those of you who frequent Purgatory during the winter, you probably have noticed (though perhaps have not been close enough to identify) lynx tracks in the uncompacted snow under Lift #3. In other adjacent untrammeled territory, such as through the “backcountry gate” and outside of the ski area permit boundary south of the top of Lift #5, lynx tracks are commonly found. And certainly, there are numerous stories from employees and visitors of seeing lynx in and near the ski area over the years.

For many of us concerned about wildlife and their habitat, the obvious question is whether Purg (yes, the common nickname) could find additional terrain within the currently developed area rather than thrashing (yes, 30+ acres of clearcutting equates to thrashing) an intact mixed forest and meadowed area, the type of which lynx favor. 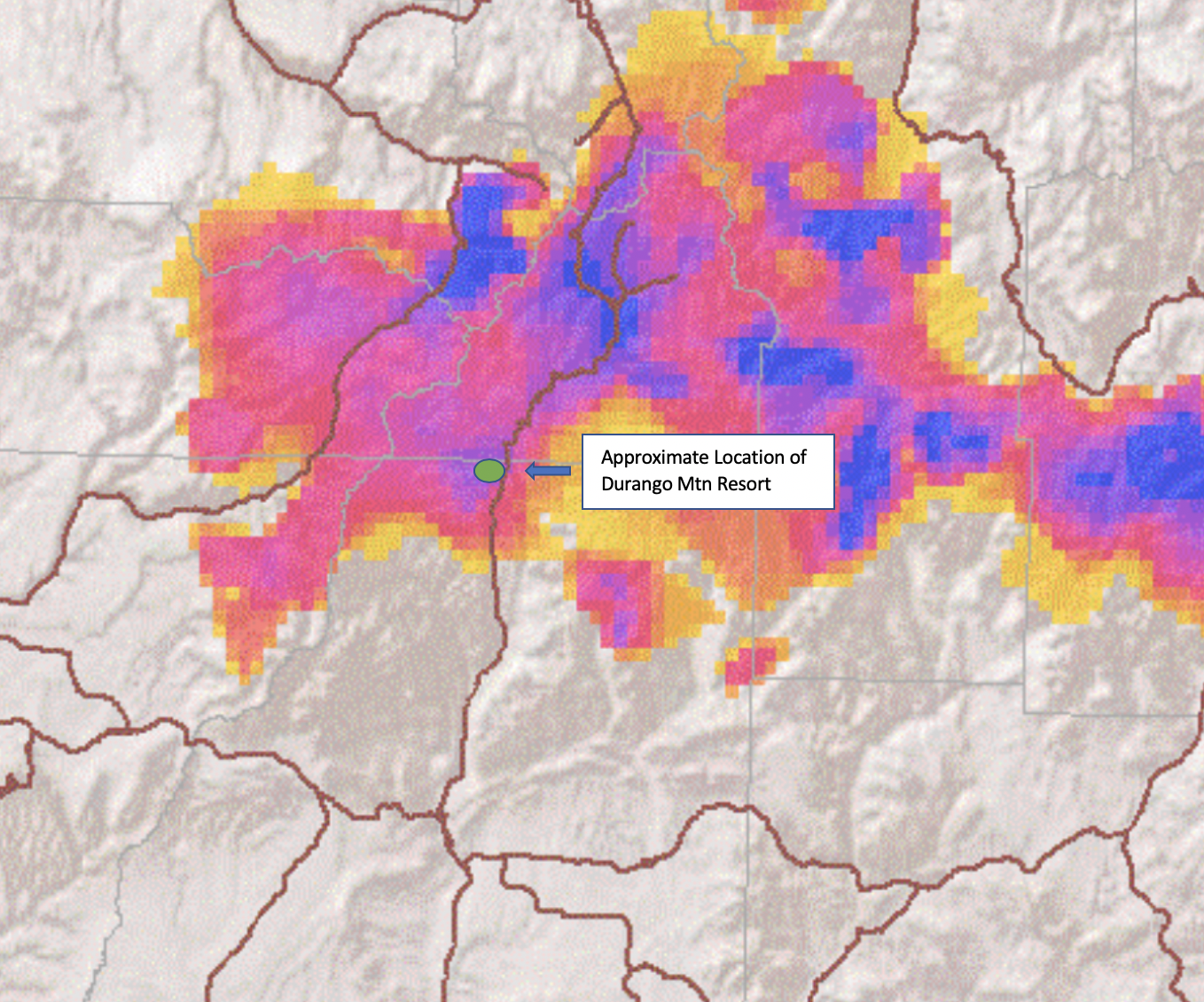 The population‐level utilization distribution for 118 lynx in the analysis dataset, shown with major highways and county boundaries for reference. Low‐intensity use is shown in yellow, moderate in orange, high in blue. [NOTE: This is a portion of the original map as published, zoomed in to the Durango Mountain Resort Area (also known as Purgatory Resort]. Theobald, D. M. and T. M. Shenk. 2011. Areas of high habitat use from 1999-2010 for radio-collared Canada lynx reintroduced to Colorado. Report to the USFS.

According to some Purg aficionandos, including former employees, possibilities for beginner terrain exist adjacent to Lift #4 and between lifts #3 and #4.  Perhaps these are workable, or perhaps not, but the resort’s disinterest in sharing alternatives with the public and the USFS Forest Service’s (USFS) “no show” in insisting that the environmental analysis include nothing more than the official Proposed Action don’t serve the public’s interest, nor those of the lynx or the Colorado River cutthroat.

As to the Colorado River cutthroat trout, determined actions have been underway for decades by Trout Unlimited, Colorado Parks and Wildlife and the San Juan National Forest (SJNF) to reestablish the regionally diminished cutthroat population, a state Species of Special Concern. Their collaborative and continuous efforts have involved finding the necessary financing and person-power focused on reinvigorating the cutthroat population utilizing the high quality waters of the Hermosa Creek watershed (which includes Ice Creek).

The aim of the reintroduction effort is to strengthen the trout’s wellbeing across the American West – it is a very significant and laudable effort. To its credit, the Notice of Proposed Action (which serves as the environmental analysis document) notes significant concern per the future of the trout, “However, the direct and indirect effects of implementing the proposed action are likely to negatively impact the occupied aquatic habitat of CRCT in the East Fork of Hermosa Creek.” (NOPA, Page 1)

Any increase in the sediment load is a burden on the trout, therefore both construction activities and permanent infrastructure such as roads, lift pads, structures, etc. are ill-conceived additional impacts to the watershed.

Maybe I’m missing something, and it sure seems that Purg and the SJNF are, because this statement in the analysis clearly indicates the development will cause harm to this designated Forest Service sensitive species. Truly, it makes no sense that the Forest Service, who has committed years of effort and a pile of cash to supporting this species is then willing to “look the over way” when it comes to decision time – how is it that USFS is missing this obvious correlation?

After rereading the information posted by the San Juan National Forest about the proposed ski lift expansion in the NOPA document, I felt the need to check the calendar to confirm the calendar year. Indeed it is 2020, yet the environmental analysis is completely dismissive of exploring the issues of greenhouse gas (GHG) emissions and the likely carbon footprint of the expansion plans in the context of climate change.

If it was 1965 (when Purg was founded) an omission like that would be acceptable, but in 2020 it’s not – in fact the SJNF has an entire appendix devoted to climate change its 2013 Land and Resource Management Plan that has seemingly been forgotten. Most notably the resort even admits its interest in developing a new ski pod is clearly related to climate change as explained on page 2 of the NOPA, “..warming temperatures continue to affect the ability of the Columbine beginner area to meet the learn-to-ski demands due to poor snow conditions at this lower elevation…”). 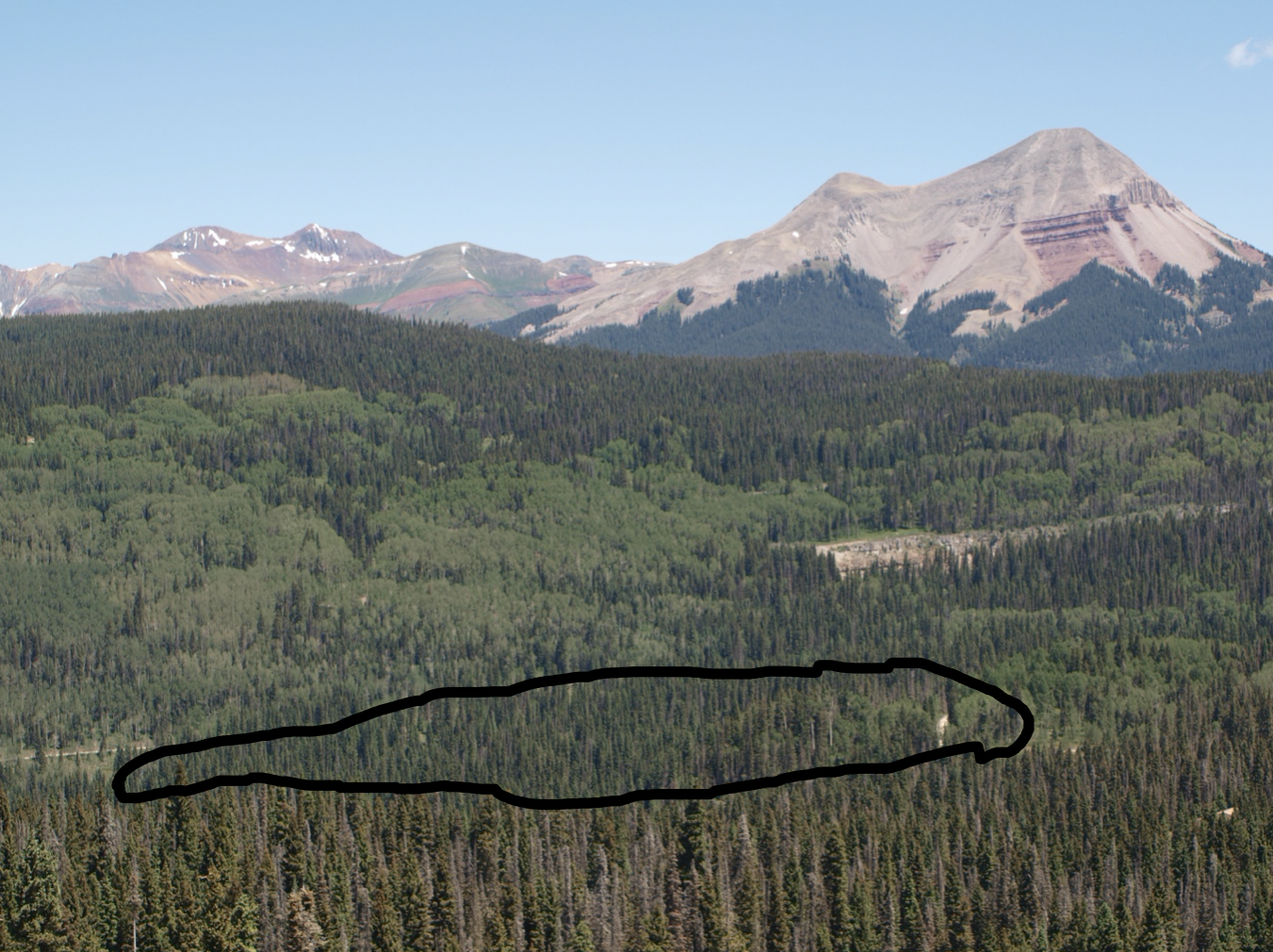 The proposed Ice Creek Lift Pod lays approximately within this polygon to the west and south of the Hermosa Park Road (#578).  The axis of the proposed lift is east/west and the terrain is primarily west facing though two of the proposed runs in the pod have significant southern exposure. Despite the higher elevation, due to this exposure, these runs may be unskiable during low-snow years and during early and late season conditions thus, negating any benefit for newer skiers. 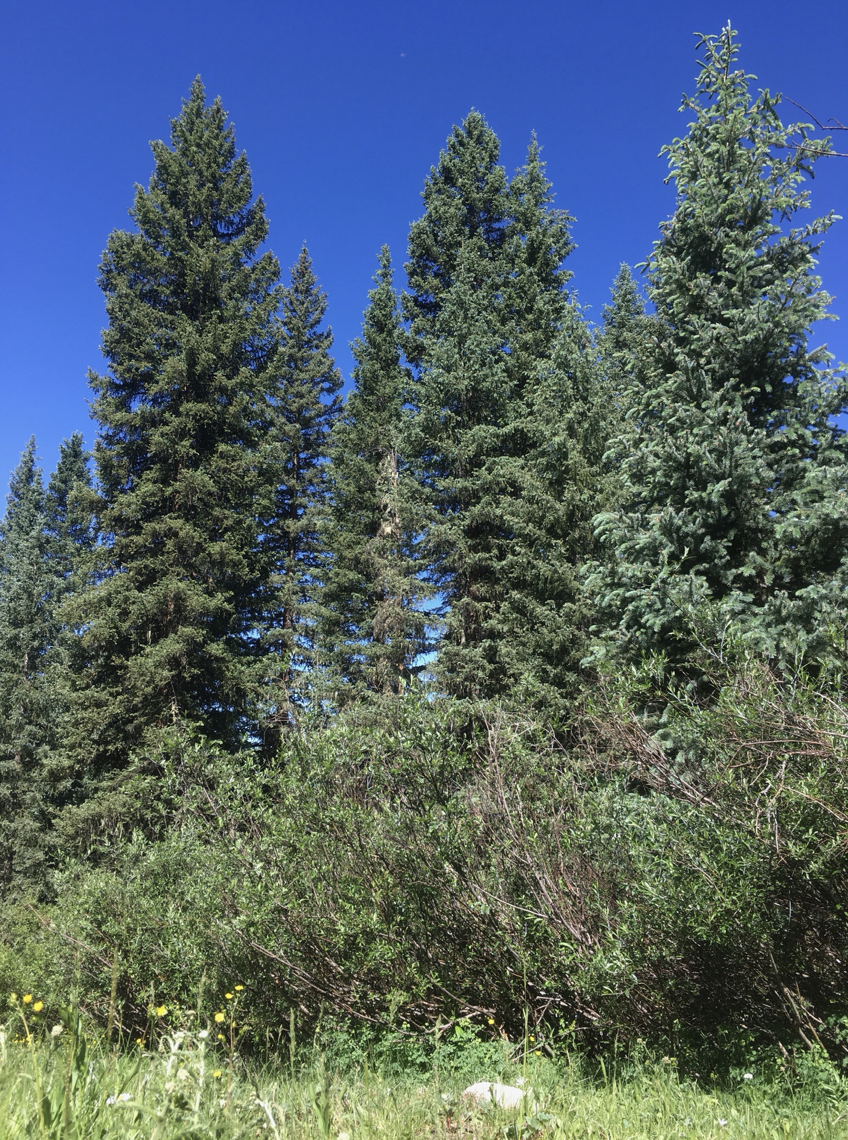 Though perhaps the forest and shrub vegetation pictured seem unremarkable to humans, for lynx this vegetation and forest type is very desirable habitat.

Unfortunately, Purgatory fails to make the next obvious connection between climate change and their interest in moving upslope for the increased probability of a snowy beginning skier area rather than a rain-soaked one. Their “what me worry?” approach to the climate change catastrophe is acceptable as they evidently fail to grasp the reality that they are part of the problem, and with that, could be part of the solution.

Other ski areas, including Aspen, recognize that their business model depends on snowy slopes and have taken a lead in not only assessing their GHG emissions, but then Doing Something About It.  Many ski areas have switched either partly or entirely to renewable energy sources to offset their emissions and therefore take direct corporate responsibility for our challenging mutual circumstance.  Laudably, even Wolf Creek Ski Area with its “on again, off again” interest in environmental issues, funded a sizeable solar project sited in the San Luis Valley to compensate for their carbon footprint. During a meeting a couple years ago with Purgatory management I suggested to them that perhaps “greening up” would be a smart move operationally as well as a probable marketing boost – to date, we haven’t witnessed efforts from them.  Hint – it’s never too late to begin.

While Purgatory is the corporate entity of the ski and bike resort, it’s the US Forest Service (USFS) that is the permitting agency for the resort’s operations because Purg operates primarily on the San Juan National Forest (the one you and I own). With that reality and connected leverage, the USFS should be weighing in on the critical and overarching issue of climate impacts.  In this public review process, though, the environmental analysis document was not written by the USFS but rather by a third person contractor hired by the resort, the SE Group.

However, it’s up to the USFS to review the analysis before it is sent out for public comment and evidently the federal agency also does not believe that climate issues are worth either examination or action as evidenced on page 4 where they note that for the proposed develop the “emissions are anticipated to be small and insignificant with regard to any impacts to climate change as a result of the proposed action.”

I think we are finally all aware that “small and insignificant” multiplied by the thousands of similar sized development proposals have brought us to the daily realities we face from climate change oscillations (drought, flooding, sea rise, increased storm intensity, etc.).  Did the USFS as a whole and the SJNF more specifically miss the climate change memo, or are they short on the courage and the tenacity to call out the issue by approving projects that will increase our global carbon level and not even require a thorough assessment or even to minimally mention possible carbon footprint offsets? 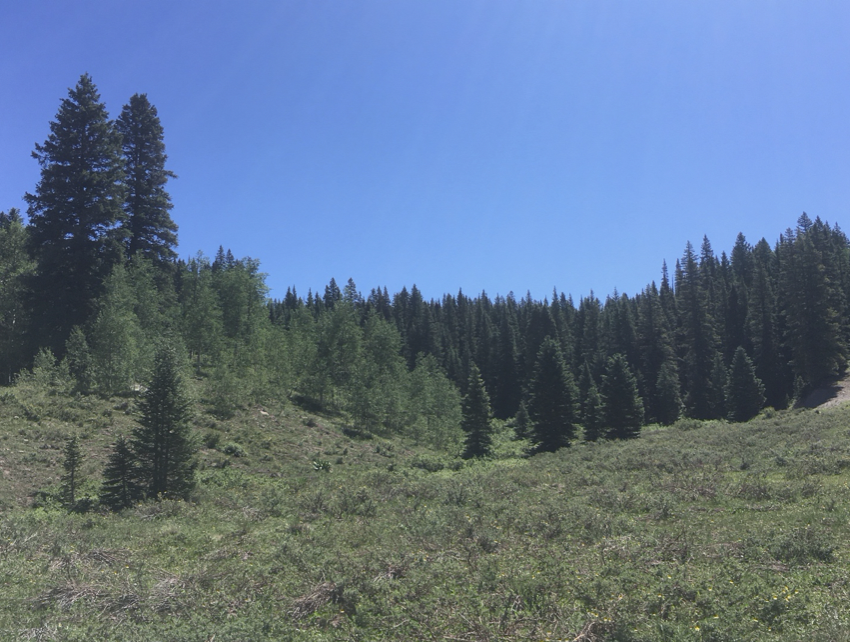 This view from the approximate west edge looks up and to the east into the proposed pod. As can be seen, beyond the meadow the landscape is primarily a spruce/fir  forest.

In sum, neither the lynx nor the cutthroat nor the entire bisosphere can comment on a project that as planned will diminish wildlife habitat and exacerbate climate change – so it’s up to you!

Go online, fire up your protect-the-natural-world juices, and send the Forest Service a comment.  We can only imagine that the lynx and trout will be looking over your shoulder and smiling.

For more talking points, check out our Action Alert on the Ice Creek Pod Proposal.

Learn more about the Ice Creek Pod Proposal on the Forest Service website. 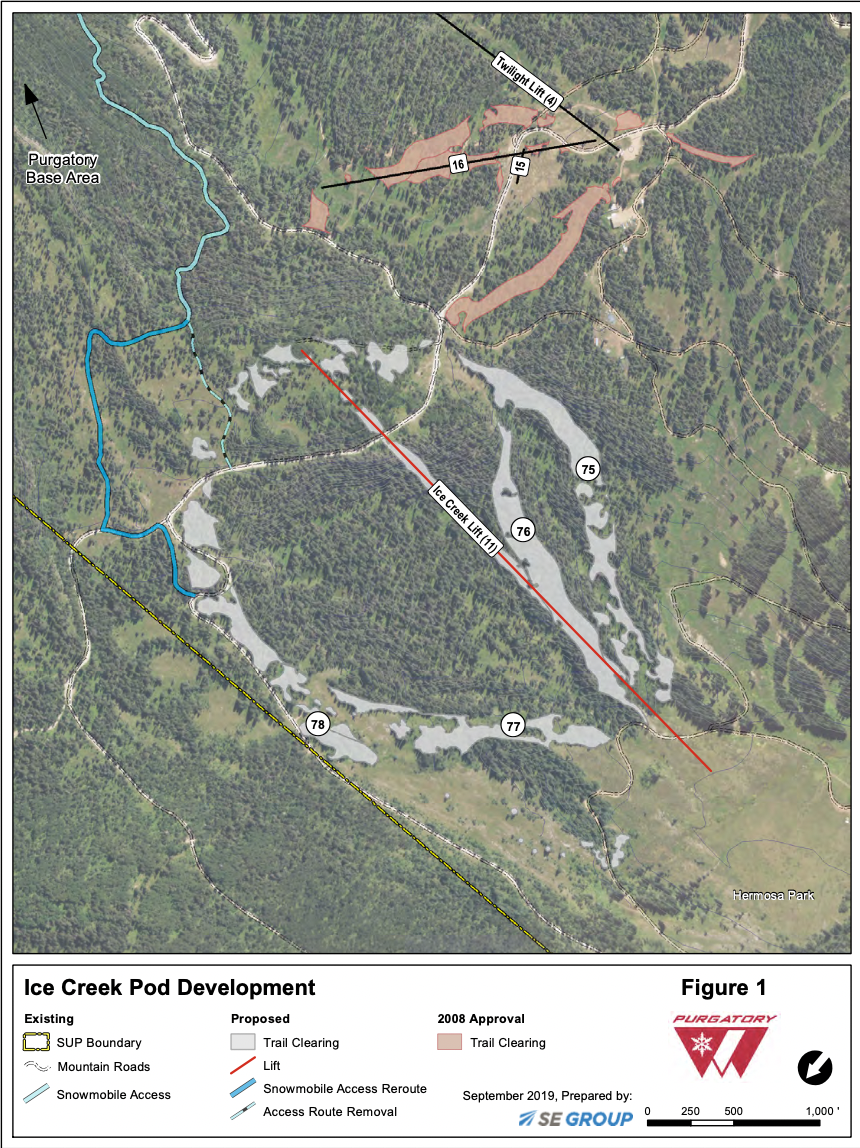 The proposed Ice Creek Pod as displayed on the Forest Service website.