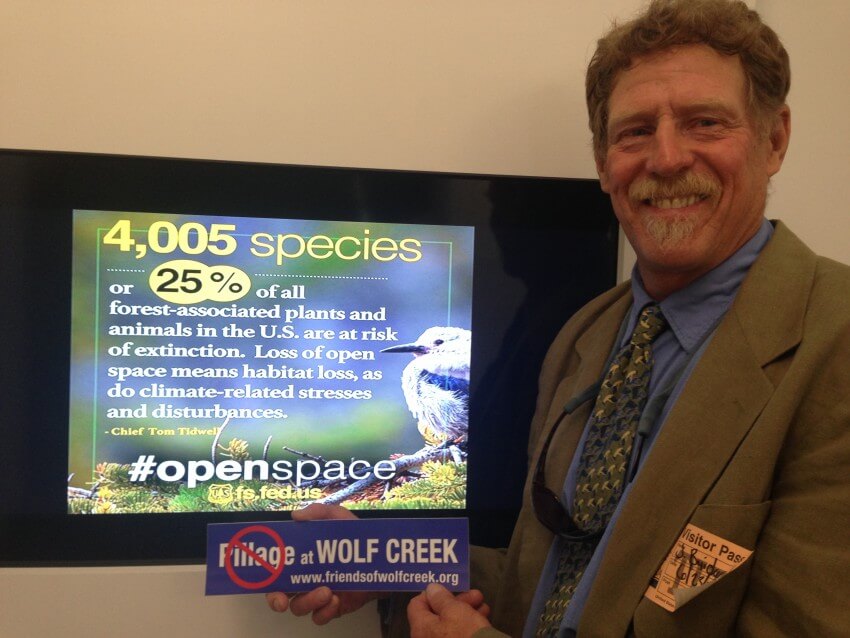 Report From Our Wolf Creek Trip To DC

Last Friday night I camped on our national forest lands to the east and just below Wolf Creek Pass. Before snuggling into my sleeping bag, I bid a goodnight to the couple dozen elk grazing amongst the ponds and wetland fens nearby. The next morning I roamed the meadows, streamsides and forest while appreciating the thrush’s song harmonizing with the morning light.

On Monday night my pre-bedtime walk switched to bidding a stone-faced George Washington (on horse, not elk) goodnight before climbing into my bed in a Washington, DC inn. My morning walk the next day was a strident and timely effort to hop onto the Metro’s redline to arrive in time for our first meeting of the day in the Ford House Office Building – no time to listen for a bird’s song. Later that day we entered the headquarters of the Department of Agriculture – there were no elk to comfort me, but the wildlife photos on the walls assured me the agency had some interest in backcountry habitat.

There were five of us on our team – a diverse collection of conservations from Colorado and beyond who journeyed to Washington to Stop the Pillage.

Our objective was to inform administration officials and members of the Colorado federal delegation of the current status to develop (and profit from) a private inholding set amidst our public lands on the east side of Wolf Creek Pass – the one owned by that out-of-state billionaire. We were also there to listen to the experts on possible avenues to save the Wolf Creek Pass fens, forest and their resident creatures from the developers.

Most of the high level managers and elected officials (and their staff) we talked with were to some degree aware of the long and twisted history of the effort (conspiracy?) to airdrop a city of 8,000 people on the east side of Wolf Creek pass at the foot of the ski area. All were interested in an update of the situation that includes the recent signing of the Record of Decision (ROD) by Rio Grande National Forest Supervisor Dan Dallas to approve the proposed land exchange. You probably already know that the land exchange would give the developer direct access to Highway 160 for the first time since the private inholding “miraculously” appeared in the middle of our national forest in 1986, enabling vehicles to fill the envisioned 4,000+ parking spaces. Just thinking (and digressing) about 4,000 parking spaces in a location with an average of more than 400 inches of snow per year – perhaps “Shoveling at Wolf Creek” is the envisioned tagline for the development…..

Meanwhile, back in Washington – we emphasized our observations that the approved Final Environmental Impact Statement (FEIS) was flawed to the core as we had noted in our official 96-page Objection to the FEIS and is detailed again in the legal complaint we filed this week in federal court. If you derived two lists from the FEIS, one listing “Important Issues Analyzed” and the other “Important Issues Ignored”, the second list would be longer – much longer. The so-called scope of the FEIS was very narrow, basically it looked at the exchange of real estate parcels while ignoring the proposal of airdropping in that 8,000-person “village.” Yes, that would include those 4,000+ parking spaces where those elk were grazing, the thrush was singing and the marshmarigolds were beginning to bloom.

Our meeting hosts asked a wide range of questions regarding community interests, wildlife habitat, the environmental analysis process, involvement of various agencies, concerns of nearby landowners, specifics of the project history, and more. There was one question they did not ask, as they seemed to already know – our mettle was strong as ever and our intentions were clear, Stop the Pillage.

While making the rounds of the Capitol and departmental offices we were buoyed by the tremendous amount of support being shown by supporters of a wild Wolf Creek Pass with the thousands of letters, postcards, phone calls and petition signers weighing in as we walked the marble and granite halls and told our story. It was evident by the words and expressions of many that we met with that we were not standing alone in our nation’s capitol – they knew, we knew – that we had all of you with us.

The multi-decade effort to Stop the Pillage has been long, convoluted, strange and demanding and we would certainly would have received our Patience and Persistence badges had been this a scouting achievement effort. With the incredible public support, a wide array of committed partners, a strong Stop the Pillage strategy, and certainly the knowledge that these lands deserve to be wild (not asphalt) I feel as confident as ever we will prevail. Together we will – Stop the Pillage!