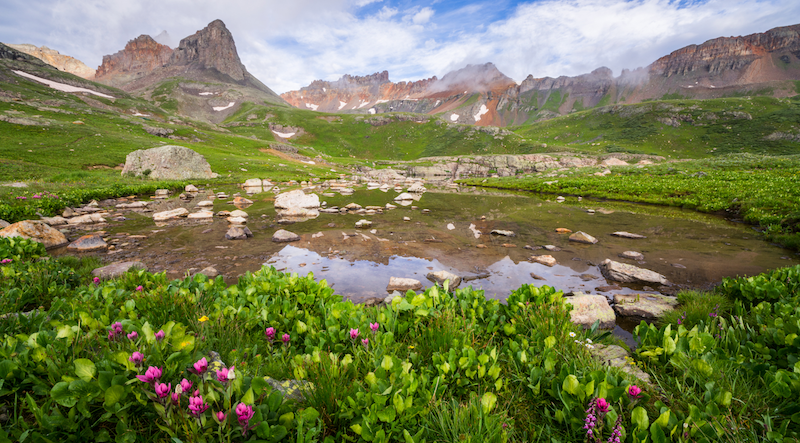 With spring full bore upon us, it’s hard not to cast an envious eye toward the high country and start daydreaming about alpine wildflower hikes. One favorite destination for many is Ice Lake Basin outside Silverton, one of the prettiest spots imaginable.

Safeguarding that unspoiled beauty and recreational appeal is at the heart of the recently introduced San Juan Mountains Wilderness Act. This bill was first proposed a decade ago by then U.S. Rep. John Salazar and has advanced through Congress in fits and starts ever since. After a several year hiatus, U.S. Sen. Michael Bennet has fine-tuned the details and reinitiated the effort to garner lasting protection for some of our most cherished landscapes.

The bill is a combination of wilderness additions and other landscape protections. The alpine basins surrounding Ice Lake and Island Lake, and extending across the divide to Hope Lake, would receive a designation short of wilderness.

Instead, the Sheep Mountain Special Management Area prohibits future mining and road building on 20,000 acres in the headwaters of the Animas and San Miguel rivers. Some existing activities, such as heli-skiing and operation of Xcel’s Ames hydroelectric project, preclude full-fledged designation of the area as wilderness, hence the different designation. Rather than leaving Ice Lake’s future to the vagaries of mineral markets and political administrations, advocates hope to ensure its preservation by passing a law that keeps it off limits to development.

The San Juan Mountains Wilderness Act also incorporates new wilderness designations for about 30,000 acres, thereby completing wilderness protection for a couple of iconic Colorado Fourteeners – Mount Sneffels and Wilson Peak. The bill’s largest piece finally incorporates the entirety of Mount Sneffels into the wilderness area of the same name. Currently, only the southwestern flank of the peak is within the designated wilderness. The bill adds the rest of the peak to the wilderness, along with the Sneffels Range peaks to the east, including Whitehouse Mountain and Potosi.

Those Sneffels Range peaks are undoubtedly familiar to anyone who has ever looked at a Colorado scenic calendar. This landscape encompasses one of the state’s most recognizable vistas – the spectacular scene from Dallas Divide of the often snowcapped Sneffels Range, frequently photographed with dazzling fall colors behind a zigzag split-rail fence.

Over the past decade, the San Juan Mountains Wilderness Act has undergone extensive vetting among interested groups. Protected areas are located in three mountain counties – San Juan, Ouray and San Miguel – and county commissioners from those counties unanimously endorse the bill.

For example, the Mount Sneffels wilderness boundary was carefully drawn to exclude any potential interference with popular routes, such as the Camp Bird Road that leads into Yankee Boy Basin outside Ouray. In fact, the boundary was located to avoid avalanche control work conducted for Ouray Silver Mines’ winter access on the Camp Bird Road, and the mining company consequently supports the expansion of the Mount Sneffels Wilderness.

The next steps are for the rest of Colorado’s congressional delegation to take a position on the bill. Land protection bills like this require concurrence of both senators, and the local congressman, so bill supporters are awaiting determination by Sen. Cory Gardner and Rep. Scott Tipton as to their support for or opposition to adding protections for Mount Sneffels and Ice Lake Basin.

For full details on the bill, with maps and photos, visit sanjuanwilderness.org.