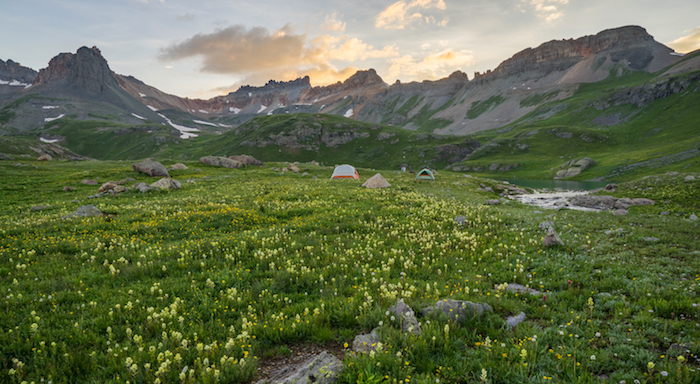 This bill fills in the missing pieces of protection where it is needed the most in the largest block of undeveloped wildlands of the southern Rockies. It enjoys widespread support from citizens, business owners, outfitters, ranchers and local elected officials. We encourage Representative Tipton to introduce the bill in the House of Representatives and for Senator Gardner to sign on as a co-sponsor in the Senate.

You can see the full press release below and find more details and maps on our San Juan Mountains Wilderness Act page.

Support from Senator Gardner and Congressman Tipton will go a long way toward getting this bill passed. If you live in Colorado, ask them to co-sponsor it!

Half of the acreage would expand or create wilderness within well-known vistas – the Sneffels Range, Lizard Head and McKenna Peak. The bill withdraws an additional 30,000 acres from potential mining, including spectacular alpine areas in the headwaters of the Animas River adjacent to the Bonita Peak Mining District Superfund site, designated after the 2015 Gold King Mine spill.

“The legislation delivers long-anticipated permanent protection for some of our most cherished San Juan Mountains treasures, such as Ice Lake Basin above Silverton,” says Mark Pearson, Executive Director of San Juan Citizens Alliance. “It also brings the first permanent wilderness status to a desert landscape in southwest Colorado, the rugged badlands of McKenna Peak in the Dolores River watershed’s Disappointment Valley. With this legislation, we can be sure these iconic regional landscapes are safeguarded from future hardrock mining or oil and gas development.”

The idea for the bill first came about in 2007, born from a desire to conserve revered scenic vistas, like the Mount Sneffels Range, while also keeping roads, mines, and oil and gas leasing out of areas around Hope Lake and Ice Lake. Much like the successful Hermosa Creek legislation, this bill benefitted from a diversity of stakeholders engaging in a collaborative process to hash out difficult compromises over many years. The diverse and inclusive process earned the bill widespread support from citizens, business owners, outfitters, landowners and elected officials in local municipalities and all three counties, Ouray, San Juan, and San Miguel.

The Alliance and our members strongly encourage Senator Gardner to co-sponsor the bill and Representative Tipton to introduce the bill in the House of Representatives. More details, maps, and photographs can be found at https://www.sanjuancitizens.org/sjmwa.