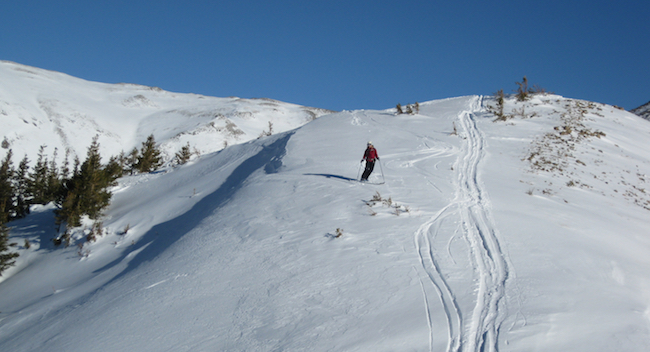 Submit Comments: Silverton Guide’s Heli-Skiing Expansion is a Bad Deal for the Public

The stewardship of our commonly owned lands is a balancing act tightly linked to the missions of the US Forest Service and Bureau of Land Management (BLM) as they allow and encourage multiple uses of our lands. The decision that lies at the feet of the BLM’s Gunnison Field Office regarding whether to support Silverton Guide’s desire to expand their heli-skiing operation by a “mere” 10,000 acres falls squarely into the “multiple-use balance matrix.”

In 2014 many interests in southwest Colorado were harmoniously pushing forward in an effort to protect the Hermosa Creek watershed through federal legislation. Enroute to that goal an unusual and controversial land management dilemma arose that begged for a solution, or perhaps more accurately, southwest Colorado residents and San Juan County (in particular) begged for a solution. Through a combination of mismanagement, oversights and circumstance the western section of the West Needles Contiguous Wilderness Study Area (WSA) – lying between Molas Pass and the Animas River – should have been off limits to motorized travel.

Instead it become somewhat of a mecca for winter recreationists, especially snowmobilers. Indeed, the federal agencies had bungled this one so badly that they had even permitted commercial activities in this 960 acre WSA. What should have been prohibited was now commonplace and a permitted use. Perhaps even more importantly, it had become a critical component of San Juan County’s winter economy.

The management and use conundrum of the West Needles WSA could not be ignored any longer. Various sectors of the community came together and through dialog and compromise fashioned a solution that benefitted numerous local businesses, supported winter recreationists, set aside important habitat for the imperiled Canada lynx, and relieved the federal land management agencies of a self-inflicted headache. Boundaries were modified, new management protocols were adapted and many people celebrated as the desired new land designation scenario was legislated by Congress as part of the Hermosa Creek Watershed Protection Act of 2014.

Are there parallels to the West Needles Contiguous WSA story and the proposal by Silverton Guides (SG) to expand their operational territory by sixteen square miles? No. And that is the point of this blog and a central component of the reasons why SG’S proposal is clearly not in the public interest.

The West Needles WSA’s commercial and public use had evolved to the level where hundreds of users enjoyed these 400 acres over a weekend. Many businesses benefited from the newly created Molas Pass Recreation Area and users ranging from snowmobilers to cross-country skiers to dogsled mushers all benefited. No users were displaced and thousands of user-days per winter season continue in the new Recreation Area.

In contrast, the Silverton Guide’s heli-skiing Special Recreation Permit (SRP) proposal outlined in the Preliminary Environmental Assessment (EA) released on November 10 would utilize an additional 10,000+ acres (for a total of 25,000+ acres) for the benefit of one business and a couple hundred of their clients per winter season.

Looking at the balance sheet we believe that SG’s new scheme would likely displace thousands of user-days by backcountry skiers, ice climbers, snowmobilers, ski mountaineers, dog walkers, nordic tourers, and others. These winter users would either be directly displaced due to avalanche control activity, including related road closures, or by the heli-skiing operations such as helicopter noise and heli-skiers being dropped above backcountry skiers. While helicopters are prohibited from landing in the Weminuche Wilderness and Wilderness Study Area, winter visitors to those areas would now be affected by SG’s helicopter operations.

Backcountry skiing has been a viable winter activity in San Juan County for many decades – it’s fair to say that it now has historic status. Industry numbers indicate that backcountry skiing, along with other winter uses such as snowmobiling and ice climbing, have been steadily growing in popularity throughout the West. Judging from the current winter parking conundrums along US Highway 550 and San Juan County routes 2 and 110, this is true locally.

We find no solid substantiation for the BLM making a “multiple-use balance matrix” decision in favor of one business and a few hundred user-days by heli-skiers to the detriment of thousands of winter-use visitors and residents. It’s clear to us that the BLM should point Silverton Guides to the north and east for suitable and remote territory for their operations where they can operate without adverse affects on others. Skiing safely in the San Juan Mountains is always a judgment call and should continue to be so – there is no need for the public to have to worry about helicopters overhead and for Silverton Guides to need to factor in the winter users below.

There might be territory for Silverton Guides to expand in the San Juan Mountains, but it’s not into areas currently (and happily) used by local residents and visitors to our beautiful mountains.

And perhaps we should also ask what the lynx prefer…

Comments Due by December 12th

1. Deficient Environmental Assessment (EA): The EA must be reissued to include a through analysis of teh 200+ public comments previously submitted and should include numerous alternatives for management direction. Issues the EA failed to analyze include:

2. Will cause unnecessary increase in user conflicts: In the Silverton area there are thousands of acres of remote terrain not accessibleto day use by skiers, snowboarders, snowmobilers, dog walkers and others that can be used for heli-skiing. There is no need to increase user conflicts by allowing heli-skiing in commonly used front-country areas accessible by county roads. Adding more than 10,000 acres to Silverton Guides Recreation Permit is not an exchange, but an addition of more than 16 square miles of public lands that under certain conditions will be the exclusive use of the permittee.

3. BLM should not prioritize commercial over public use: The BLM has no obligation to prioritize the commercial use of public lands ahead of the interests of recreational users and other businesses who currently and historically have utilized these accessible-by-road front country areas without the concerns of helicopter noise, avalanche control activities and possible road closures.