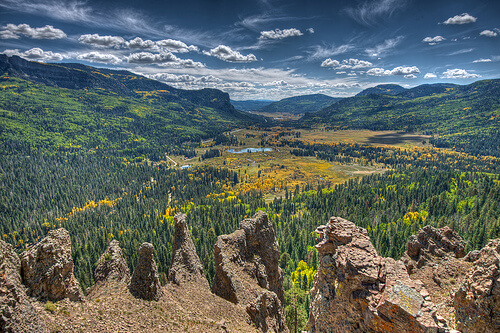 The fight over the Pillage at Wolf Creek is on, folks, and we need your help.

Haven’t heard of this little gem? Trying to block negative thoughts in the New Year? This column is for you.

For the uninitiated or otherwise preoccupied, here are the CliffNotes to the 29 years of money-fueled chicanery – countered at every turn by community organizing – called The Village at Wolf Creek.

The scene: A developer named Red McCombs wants to build a 10,000-person “village” on top of Wolf Creek Pass. He owns an inholding adjacent to the ski area that lacks road frontage or year-round access.

At a site boasting the state’s deepest snowpack, it turns out commercially viable site-development without road frontage simply is infeasible. In order to commence with their ill-conceived plan, McCombs and friends lean heavily on the federal government to resolve their access issue by giving them a parcel of public land.

Act 1: It’s 1986, and the developer’s request for a land swap is denied by the Forest Service, a decision that inexplicably is reversed months later. Money, apparently, speaks the King’s English.

Act 2: A coalition of environmental groups oppose the politically driven reversal and win a series of lawsuits and appeals forcing the Forest Service to scrap the land swap and prepare a comprehensive environmental impact analysis.

Intermission: At this point in the play you wish on your lucky stars that the Rio Grande National Forest leadership will rise to the moment and defend the public interest. “Caring for the land and serving people” is its mission, strongly suggesting that the land and the people have priority over the proposed development and the person of McCombs.

Act 3: It’s Nov. 20, 2014, and Dan Dallas – supervisor for the Rio Grande National Forest – green-lights the land swap. His department’s analysis is woefully inadequate, shirking the full extent of its legal and regulatory responsibilities and providing insufficient analysis on everything from critical lynx habitat to the development’s impact on rare fen wetlands.

To add additional insult, the Forest Service knowingly violates the Freedom of Information Act and continues to withhold critical project documentation from the public.

Act 4: Environmental groups kick in to high gear, and Jan. 5, 2015, they submit 96 pages of detailed objections to the Forest Service’s pathetic excuse for an environmental impact statement. They prepare for a lawsuit.

Act 5 (your part): Community members, ever passionate about public lands and participation in a transparent democracy, get involved. They sign up for San Juan Citizen Alliance e-alerts, like us on social media and donate money to help with legal costs and community organizing.

Unwritten epilogue: Facing another legal defeat and unwavering community rejection, the developers decide to look for a more suitable spot for their “village.” Protecting their inholding with a conservation easement, the once vilified developers become fondly remembered for their contribution to the beauty and wildness of Wolf Creek Pass.