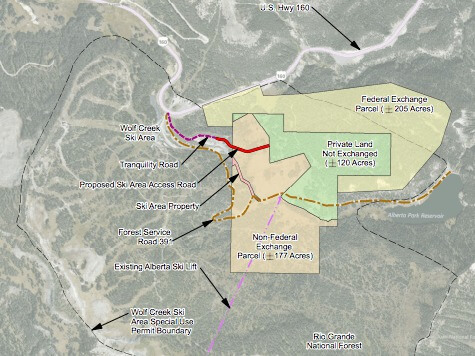 Is the fight for the future of Wolf Creek over? Has the community effort to protect this wild, unique and beloved landscape been in vain?

After all, the U.S. Forest Service did just sign a Record of Decision (bureaucracy-speak for “we’re all done here”), approving a land swap with the would-be-developers. Where do we go from here?

I’ve got an idea or two.

There is a reason, a good reason, why the drafters of the U.S. Constitution created three branches of government: checks and balances. In an oversimplified rendering, Congress writes laws, the executive branch implements laws and the judicial branch explains or interprets laws.

Though complex in practice, this structure helps limit the power of any one branch of government. It also provides a venue to address grievances when parties disagree on whether or not a law was appropriately interpreted or executed: the courts.

On behalf of Wolf Creek, please help me extend a big ole’ belated “thank you” to the delegates to the Constitutional Convention for their perspicuity (highfalutin-speak for “really good ideas”).

Those of us who believe the Forest Service, an arm of the executive branch, has a responsibility to follow laws written by the legislative branch have some questions we’d like to ask of the judicial branch. Said another way, San Juan Citizens Alliance and our allies are going to sue the Forest Service over what we believe is a flawed and illegal decision.

A number of our complaints can appear complex to the layperson, tied up in differing interpretations of things like the National Environmental Policy Act. One issue, though, is not complex.

There exists a little law called the Freedom of Information Act. Truth be told, it’s anything but little. FOIA is the workhorse of government transparency and accountability, instructing the government to make available to any person information or documents related to government activities upon request.

There are, of course, exceptions under FOIA. Here’s something that is emphatically not one of those exceptions: failing to release documents because they’re going to make your agency look really, really bad.

Community organizers have filed two FOIA requests related to Wolf Creek. The Forest Service’s response has gone something like this: delay, delay, provide an incomplete set of documents, get sued, lose lawsuit, be ordered by the court to release an additional 13,000 documents missed the first time around (whoops), fail to comply with court order.

That’s right, folks. The Forest Service is in open violation and defiance of a federal court order to give our community documents that would expose who did what, when and why as they grasped at straws to justify their decision to destroy Wolf Creek Pass in the name of “the public interest.”

Is the fight for Wolf Creek over? Far, far from it. Let’s see those documents and what they contain. Something tells me things are about to get very interesting.