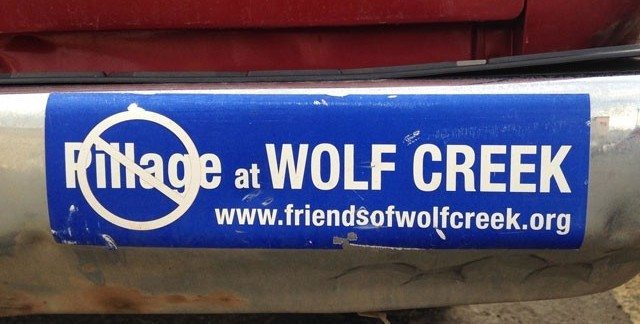 I keep hearing this, despite the fact that San Juan Citizens Alliance, and Friends of Wolf Creek partners, continue fighting tooth and nail (in three lawsuits) to prevent the construction of a massive development on Wolf Creek Pass.

But the battle is far from over. We haven’t lost; if anything, we’re digging our nails in further.

It’s true: Last spring the Forest Service approved a land swap that paves the way for development. The approval hands Texas billionaire B.J. “Red” McCombs highway access to his private property, allowing him to build his “Village at Wolf Creek” – an 8,000-person, year-round resort the size of Aspen. It is understandable that some people think we’ve lost.

But, in the words of late, great Yogi Berra, “It ain’t over till it’s over.”

We sued the Forest Service for approving the swap despite a deep lack of transparency and violation of environmental laws. We also reached an agreement with developers not to break ground until the decision plays out in court, thereby preserving the ability to reverse the deal should we prevail.

So, the battle isn’t over. We’re confident we’ve got a good chance to win in court. Here’s why:

Right now it’s my job to keep you updated: Through our blog series, “Wolf Creek Files,” I’ll let you know what incriminating evidence we get from the released documents as we dig through them. Keep your eyes and ears open by following us on social media (Facebook, Twitter, Instagram).

Most importantly: We need you to share the story of Wolf Creek Pass with everyone you can. Show the world that the fight isn’t over – that it’s yours to win.