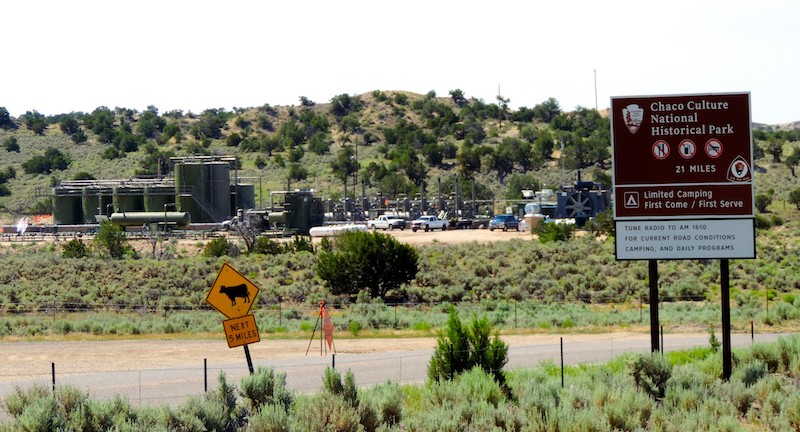 Even a court ruling doesn’t seem to deter the Bureau of Land Management in Farmington. They are determined to push through industry wish lists, undermining environmental review, public input, and even the courts. We’ll continue calling them out and using every tool at our disposal. As always, we are bolstered by so many of you who care about and are equally committed to helping protect Greater Chaco.

Santa Fe, NM: Citing federal requirements, Navajo government officials and 16 tribal and environmental organizations, representing over 1.2 million members sent a letter to the Bureau of Land Management (BLM) today calling for public hearings and a more thorough analysis on the agency’s response to a court order meant to curb fracking in the Greater Chaco region of northwestern New Mexico.

“Here we go again,” said Navajo Nation Council Delegate Daniel Tso, who represents the tribal chapters that will be impacted by BLM’s drilling proposals. “The Tribes have spoken, Congressional leaders have spoken, and the courts have ruled that BLM must do more than rubberstamp oil and gas proposals, yet the agency continues to do more to benefit industry and less to benefit people.”

The May 2019 Tenth Circuit ruling held that BLM violated federal environmental laws in approving environmental assessments that failed to analyze the cumulative water impacts of fracking in the Greater Chaco region.  Two days after the order was issued, the BLM republished its analyses with a 10-day comment period over a national holiday.

“What is the big rush?” said Samuel Sage, Community Services Coordinator for Counselor Chapter, Navajo Nation. “This process has gotten so old; once again, BLM has provided incomplete work.”

In March 2019, WildEarth Guardians and Physicians for Social Responsibility won a lawsuit challenging BLM oil and gas leasing in the state of Wyoming. The order declared that BLM must consider the cumulative impacts of climate change in its oil and gas decisions.

“It’s clear the Trump administration’s ‘Energy Dominance’ agenda intends to sacrifice every last acre for oil and gas, despite enormous tribal and public outcries and crisis-worthy climate impacts,” said Rebecca Sobel Senior Climate and Energy Campaigner for WildEarth Guardians.  “These rushed analyses and short comment periods signal that the Bureau of Land Management does not take court rulings or the public seriously, and we’re demanding a new course forward.”

“Rushing environmental analysis speaks to the fact that the BLM is clearly more interested in leasing land for oil and gas development rather than actually identifying adverse impacts from fracking. Also, rushing due process discourages public input. The BLM is more concerned with further oil and gas development rather than the land and peoples health.”
“In the current analysis, the impact of the 3,960 Mancos Shale wells must be accurately accounted for by including the cumulative impacts to the water resources in the Greater Chaco area. The cumulative impacts to the water are critically important to the EA that should result in overturning the FONSI if it were accurately included. Also, the 10-day public comment period is not enough time for concerned citizens to fully understand the impact of the FONSI and the EA; BLM needs to extend the comment period.”

“The integrity and validity of the public process must have a thorough environmental impact analysis in order to help establish meaningful community engagement. Anything less is just more injustice and disregard for all beings who are directly living with the environmental violence or the threat of this assault from the BLM. The comment period needs to be extended.”

“I continue to try to understand why the U.S. Bureau of Land Management (BLM) works to undermine the Democratic process of public notification, public comment, consultation and engagement, including the mandated Tribal Consultation (BLM Handbook) in an effort to fast track corporate greed and interests. Is not the Health and Well-being of Americans a concern here, especially from the Environmental mess they will create? Not to mention the Human Rights violations of the Greater Chaco region residents and Indigenous Peoples and the desecration of sacred sites, sacred lands and Our Sacred Water. When will the BLM stop and think?”
“The Bureau of Land Management continues to ignore voices of Indigenous peoples by not only refusing to hear our concerns but cutting us out of the conversation completely. We know that what violence happens to our land, happens to us and we will continue to hold the BLM accountable.”
“BLM needs to conduct meaningful, cumulative analysis of the impacts of fracking in the Greater Chaco. These rushed Environmental Assessments and Findings of No Significant Impact with shortened public comment periods do not represent a genuine attempt to evaluate how fracking will affect communities living in the area, public health, and the climate.”
“The BLM has yet to comply with the decision made by the 10th Circuit Court of Appeals. This cursory assessment and 10 day comment period violates the spirit of that ruling which tasked them to reconsider how drilling would impact natural resources in the area. Rushing through this process is clearly an attempt to benefit drilling industry and keep the public in the dark.”
“600 hundred cities the world over have declared that we are experiencing a climate emergency, yet the BLM is rushing a flawed process to exacerbate climate disruption and open our lands to more drilling and exploitation. We need a government that protects us from voracious corporate greed not one that enables it.”
“Please protect the people, animals, plants, air, and all minerals, that surrounds all sacred sites and this one in particular. This area is a world famous place that people visit to learn the history of indigenous people.”
“The BLM appears to be sticking its head in the frac sand by failing to evaluate the mounting impacts of approving additional oil and gas wells. The public knows that water and climate are critical to our communities; the government has shirked its responsibility to assess impacts to either, while denying the public a reasonable opportunity to review and comment on the plans.”