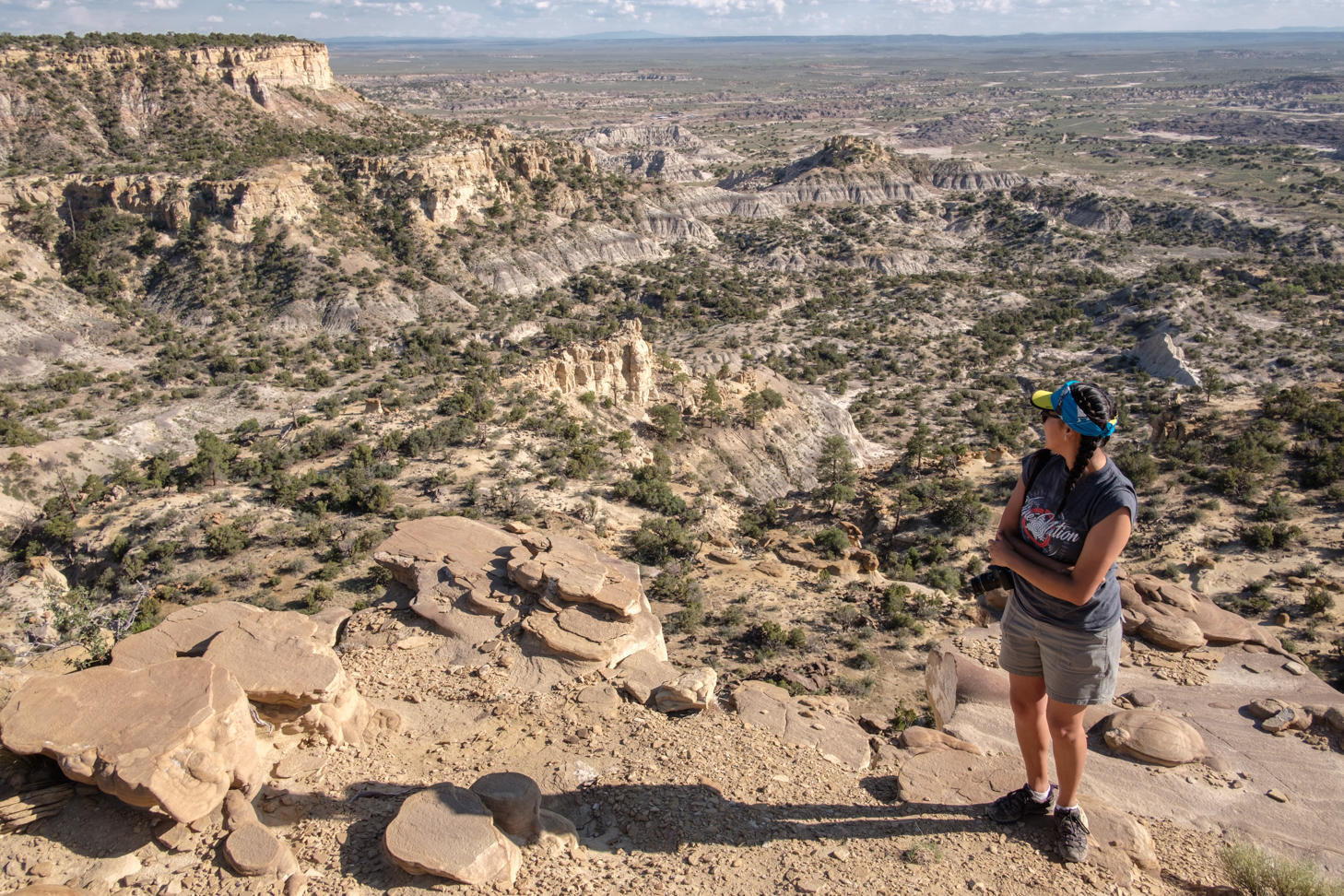 It’s certainly promising, if not surprising, that Department of Interior Secretary David Bernhardt is making promises to protect Greater Chaco. We’re grateful to Senator Heinrich for playing a key role in orchestrating Bernhardt’s visit to Chaco Cultural Historic Park this week to see in person some of the greatest treasures our region has to offer.

The promise to provide a temporary moratorium will provide the region a brief respite, but along with our partners we will continue to advocate for what the region really needs: strong, permanent protections. The area needs a new comprehensive management plan in order to protect cultural resources, public health and safety, and the environment.

Learn more about our campaign to protect Greater Chaco
See our full press release below.

Counselor, NM – Environmental and Indigenous groups a part of the Greater Chaco Coalition are thanking Senator Martin Heinrich for facilitating Department of the Interior Secretary David Bernhardt’s visit to Chaco Culture National Historical Park on Tuesday, but are concerned that promises made to defer oil and gas leasing for one year within 10 miles of the park in order to give Congress time to consider the recently reintroduced Chaco Cultural Heritage Area Protection Act are not enough to ensure the protection of this special region and the health of communities.

Secretary Bernhardt’s moratorium may provide temporary respite from the Bureau of Land Management’s continued practice of offering, only to defer after immense protest, parcels for lease in close proximity to the park, but it is much weaker than former Secretary Zinke’s call to defer oil and gas leasing at-large pending “analysis of more than 5,000 cultural sites in the proposed leasing area,” as the impacts of fracking to communities, public health, and the climate only grow larger far beyond the proposed 10-mile buffer.  To preserve the health of communities and safeguard the integrity of the Greater Chaco Landscape, groups are calling on the Department of Interior’s Bureau of Land Management and the Bureau of Indian Affairs to follow through on Secretary Bernhardt’s statement calling for a new Resource Management Plan that would offer comprehensive planning for the region, rather than staying course on a limited amendment to the agency’s outdated 2003 plan, which by design will restrict land-use planning to oil and gas extraction and fail to provide cultural landscape-level protections.

A recent federal court ruling found the BLM violated the National Environmental Policy Act by approving drilling in the region without assessing the cumulative impacts of fracking on the landscape.  In response to the ruling, a coalition of Tribal leaders, environmental, and community groups representing over 5 million people called on the BLM to halt new oil and gas drilling and leasing until the agency assesses the cumulative impacts of fracking in this sacred landscape.

See here for a map of fracking and Chacoan Great Houses in the region.

“I am encouraged that Secretary Bernhardt has taken the initiative to tour the great and irreplaceable beauty of the Chaco Culture National Historical Park.  I hope that the Secretary and Senator Heinrich take into consideration the gravity of the concerns expressed by Navajo Nation President Johnathan Nez and all the distinguished Pueblo Governors that were present on the Secretary’s tour. In our community-based efforts, we continue to concentrate on the entire Greater Chaco Landscape beyond the buffer and the health impacts to community residents, the potential impacts to the aquifer, the daily impacts of the truck traffic, and the impacts to air quality. That work continues, and we hope that the leaders who have decision-making responsibilities realize that their decisions affect the long-term lives of the people living on the land and future generations”.

“On behalf of Counselor chapter and community members we are cautiously accepting the one year moratorium made by DOI Secretary Bernhardt. We are so grateful to our Congressional Delegation for their hard work on pushing the Protection of Chaco Act. Our work is not complete. We will continue to move forward.”

“A new Resource Management Plan is necessary because the Bureau of Land Management Farmington Field Office has routinely ignored the objections to Mancos shale development raised by the living communities who have consistently raised concerns about the cumulative impacts to the local communities, public health, the environment and the cultural landscape of the Chaco Culture Park; we believe a one-year moratorium will fail to ensure accountability and transparency when approving new drilling and leasing.”

“A Gigantic Thank You to Senator Martin Heinrich for his incredible work and foresight in bringing Secretary Bernhardt to New Mexico to see, hear and Feel our Sacred Chaco Canyon and the Greater Chaco region.  The newly anticipated one year moratorium to suspend oil and gas leasing in the observed 10 mile buffer zone is Monumental. We now have a chance to further assist the Department of the Interior and Bureau of Land Management in revising or re-creating an adequate and responsible Resource Management Plan for the region.  I have the utmost confidence that Martin will help and monitor the process to get that done. Senator Heinrich has listened to the Indigenous Peoples and the People of New Mexico, and I applaud him for that. Now, let Us All keep the DOI and BLM accountable and move this forward!”

“Of course we are happy that we have support from those who have seats in office. We thank them for uplifting the awareness around the ancestral and living culture of the Greater Chaco Region, but a year of protection is taken with caution. The historical and present relationship that indigenous people and the federal government have with each other does not stand on a basis of trust. We want to make sure that all indigenous relations that have ties to the ancestral site, or to the land within the Greater Chaco Landscape have access to what this new resource management plan states and has a voice in how their lands are managed.”

“It’s great Senator Heinrich secured temporary protection for the area immediately around Chaco Culture National Historical Park, but the reality is, the Department of the Interior can do better. The cultural integrity of the Greater Chaco landscape remains at risk until permanent protection is secured for the region and the agency reins in reckless fracking. Despite waiting five years to for updates to dated management plans, we hope Secretary Bernhardt will follow through with his promise and stop fracking this sacred landscape until meaningful plans provide alternatives to sacrificing our communities, culture, and climate to short-sighted oil and gas extraction, starting with canceling the June 20 oil and gas lease sale.”

“While this temporary moratorium is a step in the right direction, the Greater Chaco region awaits updated planning with a comprehensive Resource Management Plan. We will keep holding federal agencies and industry accountable for the cumulative impacts of rampant development on the landscape.”

“I’m glad Secretary Bernhardt visited and witnessed firsthand what is at stake in Greater Chaco. A one-year moratorium is a good first step, but permanent protection is necessary. At the same time, we must continue to work toward justice and never lose focus on the people and communities impacted by a legacy of exploitation.”

“While we are pleased the Department of the Interior has agreed to this temporary pause, one year is a band aid. Greater Chaco is a special place that needs permanent protection. The Interior Department should provide long-term protections while it prepares a new management plan and Congress considers more permanent protections in the Chaco Cultural Heritage Area Protection Act. This is necessary to ensure that this area, and the neighboring communities, will not be devastated by oil and gas development when the clock runs out.”

“A temporary one year moratorium on extraction is a first step that should ultimately lead to the cessation of any fossil fuel exploration in Greater Chaco Region. We are confident that the federal delegation will hear the voices of indigenous people, constituents and a national outcry that sacred places and public lands should never be desecrated for corporate gain. The cost is too great to our physical world and our cultural integrity. We will not rest until we can secure these goals and move to a just transition to renewables.”

“We can’t afford to jeopardize the health of communities and public lands by relying on a drastically outdated Resource Management Plan. We stand with tribal communities and the courts in saying ‘no’ to any new oil and gas extraction until the combined effects of current and planned development is carefully examined.”

“Chaco Canyon is the most extensive and important model of ancient indigenous civilization north of Mexico. As such it has been recognized by world organizations and people to be of the highest import to the whole human legacy. Chaco Canyon NHP is only a portion of the entire Puebloan cultural region and its extensive outlying cultural resources must be acknowledged and preserved. A management plan under the The Chaco Cultural Heritage Area Protection Act  and immediate moratorium on oil and gas infrastructure building and extraction activities must take place in order that the fragile prehistoric roads, settlements and cultural resources of the Chacoan peoples – and their living Pueblo descendants – be preserved”.

“How can you set a boundary on the sacredness of the landscape?”

“Of course, this is only a temporizing action — these protections last only for a single year. The ultimate goal is to protect our Chaco Historical Park into perpetuity. That will be difficult given the current administration’s predisposition toward environmental rollbacks. But hey — it’s a start!”