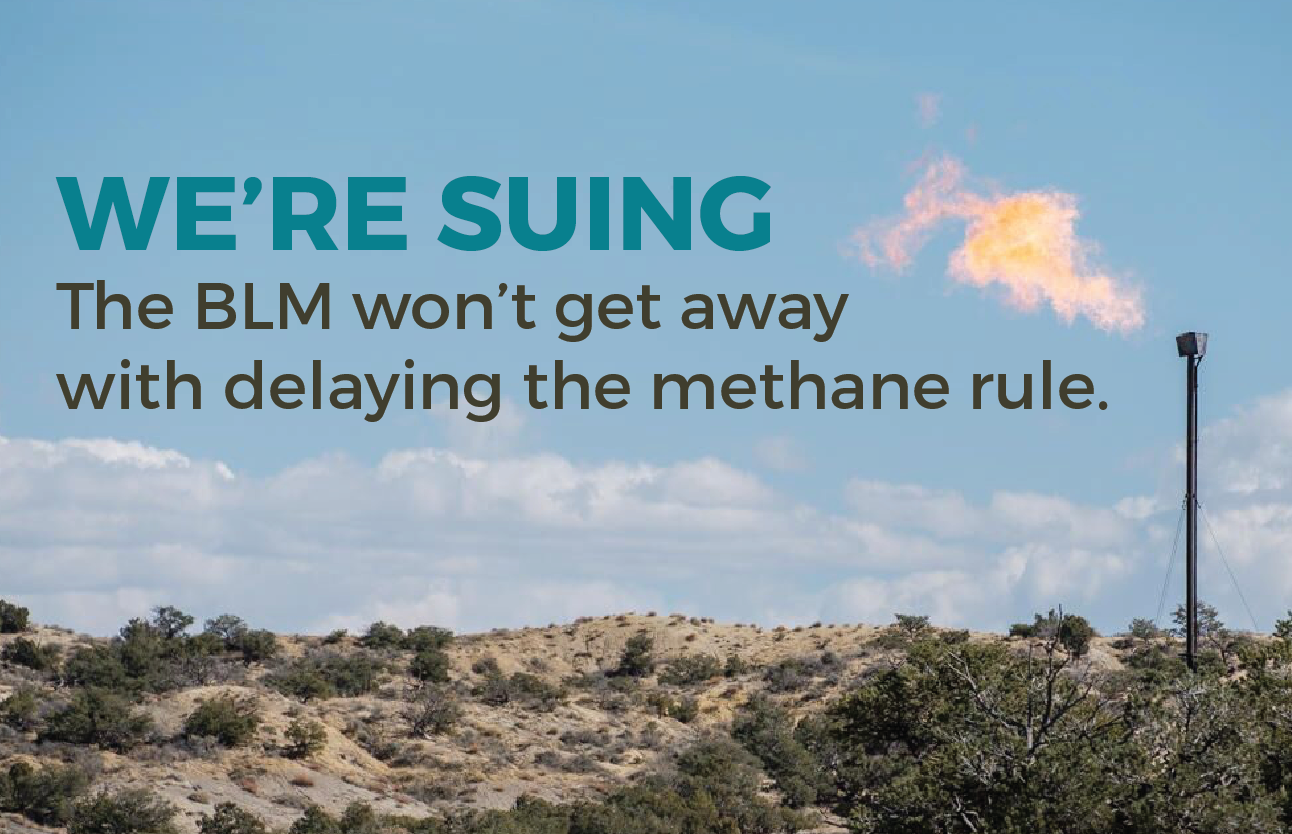 This fall, over 175,000 people commented against a proposed delay of the Bureau of Land Management’s (BLM) methane rule, a rule that is particularly important for those of us under the Four Corners Methane Hotspot and suffer the royalty losses, environmental damages, and health impacts of wasted natural gas. But the BLM ignored every one of those comments, moving forward with the one year delay to buy time to revise and weaken the rule. So today, with our partners, we sued them for it. We won’t let the public’s interest be ignored without a fight.

After defeats in court and in Congress, the Trump administration is now attempting to suspend for one year almost all of the requirements of its Methane Waste Prevention Rule that would reduce waste of publicly owned natural gas by oil and gas companies. Today, government watchdog groups filed a lawsuit to halt this illegal move.

Before even receiving comment on the rule, Interior Secretary Ryan Zinke represented to a federal court that he would delay the rule, thoroughly undermining the meaningfulness of public comment. The BLM then conducted a go-through-the-motions notice-and-comment process—featuring a lightning-fast comment period, and next-to-no stakeholder outreach culminating in a final rule that largely ignored citizen concerns. This is not how the law is designed to work. The law requires a reasoned give-and-take between the affected public and the agency that is designed to infuse democratic legitimacy into agency rulemaking. Here, the secretary’s closed mind prevented that important give-and-take.

“Interior’s BLM methane waste rule delay flies in the face of overwhelming public support, Congress’ recent rejection of an attempt to repeal the rule, a federal court’s determination that an injunction halting implementation of the rule was not warranted, and, fundamentally, core precepts of federal law” said Erik Schlenker-Goodrich, executive director of the Western Environmental Law Center. “Methane waste seriously and urgently threatens our climate, our pocketbook, and public health. If there was any doubt who Sec. Zinke serves in his position, it’s now abundantly clear it’s not the American public.”

“The methane waste rule delay is yet another action taken by the Trump Administration to benefit the oil and gas industry at the expense of the American public, particularly the millions of Westerners who use public lands for many activities including ranching, hunting, hiking and other forms of outdoor recreation.  Those Americans, and others who visit these public lands, are negatively impacted by the oil and gas industry’s wasteful practices,” said Darin Schroeder, attorney with the Clean Air Task Force which is co-representing National Wildlife Federation.

“Oil and gas companies are recklessly dumping high levels of methane into the atmosphere,” said Michael Saul, senior attorney with the Center for Biological Diversity. “It’s not just wasteful and harmful to public health, but the Trump administration is trying to let them get away with it. The lawsuit aims to hold the Trump administration accountable and prevent it from illegally suspending modest requirements to limit this potent greenhouse gas.”

The BLM waste rule, finalized in 2016, updates antiquated, 30-year old regulations. It requires companies to fix leaky, faulty equipment and reduce natural gas waste on public lands. According to the U.S. Government Accountability Office, enough natural gas was unnecessarily wasted and leaked between 2009 and 2015 to serve more than 6 million households for a year. The updated waste rule requires companies to perform leak detection and repair with affordable, off-the-shelf technologies, and restricts methane venting (deliberately releasing gas into the atmosphere), and flaring (burning off gas unused at the wellhead). The Trump administration’s decision to delay implementation of the BLM waste rule would allow industry to avoid these common-sense waste reduction measures, and continue to unnecessarily waste our publicly owned resources while the administration attempts to figure out how to kill the rule outright as a gift to its oil and gas benefactors. Methane waste not only shortchanges taxpayers, it harms public health and contributes significantly to climate emissions.

Notably, the oil and gas industry failed in three prior attempts to derail the rule. In January 2017, a federal judge in the U.S. District Court for the District of Wyoming denied a motion to enjoin the methane rule. In May 2017, the U.S. Senate voted to reject legislation advanced under the Congressional Review Act to eliminate the rule. And, in October 2017, a federal magistrate judge in the U.S. District Court for the Northern District of California ruled that an attempt by the secretary to stay the rule’s compliance dates without notice or an opportunity for comment violated the law.