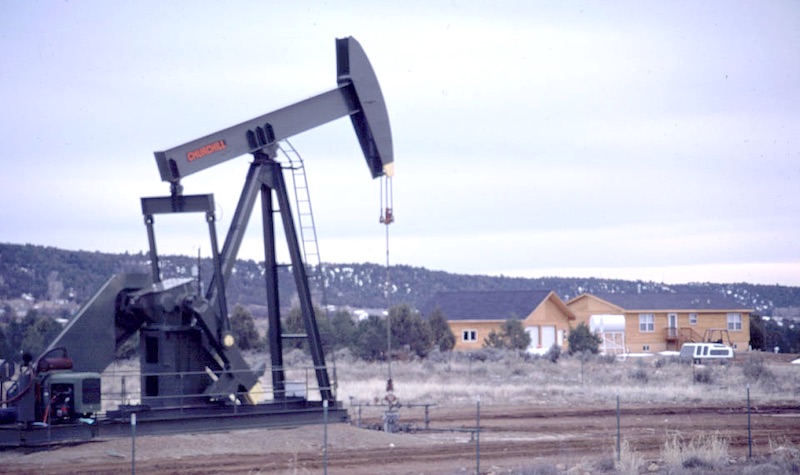 While Colorado has been a national leader in establishing state-wide methane rules to limit waste, a task force is calling for more to be done to curb ozone pollution stemming from the oil and gas industry. With many counties, particularly on the front range, unable to meet EPA standards for ozone, there is good reason to step up with stronger rules. The west slope will benefit too, where oil and gas development is largely to blame for our declining air quality.

The AQCC was hearing a scheduled update from the State Hydrocarbon Emission Reduction (SHER) Task Force on the work underway to develop regulations designed to reduce emissions coming from oil and gas wells, pipelines, storage facilities and other infrastructure. The hearing included updates from stakeholders and staff involved with the SHER Task Force as well as public comment. (See quotes below)

Officials from Adams, Routt, and La Plata counties were all in attendance to comment at today’s commission meeting as were council members from Broomfield and Commerce City.

The AQCC appointed the Statewide Hydrocarbon Emission Reduction (SHER) Task Force in 2018 with a target date to deliver final recommendations of January 2020. The Task Force is comprised of representatives from the oil and gas industry, local governments and environmental organizations.

The SHER Task Force process was triggered after nine counties on the Front Range reached non-attainment for ozone pollution under the federal Clean Air Act. In response, the AQCC strengthened Regulation 7, the rule that directs oil and gas companies on how to limit leaks of methane and other gases from their infrastructure, and applied the new rules in those nine counties starting in November 2017. The AQCC also agreed to appoint the SHER Task Force to look at reducing hydrocarbon emissions statewide.

There has been broad interest in the SHER stakeholder process by local leaders who recognize the need to achieve effective statewide hydrocarbon emission reductions from the oil and gas industry in order to mitigate climate impacts, protect public health, and help protect the state’s economy, including farming and ranching, recreation and other business activities.

Some of the key policy and regulatory questions before the SHER Task Force include:

Local officials and advocates from the Western Slope argue that both existing and future protections should be adopted statewide to reduce methane emissions and prevent ozone problems from developing in rural Colorado.  Several speakers also called on the AQCC to ensure that Colorado remains a leader in limiting emissions.

QUOTES FROM THOSE THAT ATTENDED TODAY’S COMMISSION MEETING

La Plata County Commissioner Gwen Lachelt told the AQCC members during public comment that emissions from oil and gas is a statewide problem that needs a statewide solution, citing the 2,400 square-mile methane cloud that has formed over the San Juan Basin in Southwest Colorado that has been largely attributed to energy companies operating in the region.

“This methane ‘hotspot’ underscores the need for stronger rules to reduce emissions that apply across the state,” Lachelt said. “Methane is a powerful climate change pollutant that threatens Colorado’s $28 billion outdoor recreation industry, which is to say it’s harmful to our economies and our way of life.”

Lachelt continued: “My county, like many others on the Western Slope, is increasingly seeing the impacts of climate change in the form of decreased snowpack, drier growing seasons, and more frequent and severe wildfires. After last summer’s devastating wildfires in Durango, which closed national forests and trails, we know first-hand that climate change is a threat to our outdoor recreation industry.”

Adams County Commissioner Steve O’Dorisio brought up the fact that local governments are subsidizing the industry and the state to ensure safe practices and the need for strong monitoring and enforcement of state rules.

“We commend any collaborative efforts that will help raise the bar for the sake of health, safety, and quality of life,” he said. “Still, we need to stress that any recommendations coming out of this effort include strengthening monitoring and enforcement. Already, local governments are forced to subsidize this industry with local tax dollars to fill in large gaps in the state’s current monitoring and enforcement framework.”

O’Dorisio continued: “For example, Adams County is spending our own tax dollars to pay for an inspection program and water quality testing program to ensure operators are following the rules. And Broomfield should not have to implement its own air quality monitoring program to ensure nearby residents are not breathing harmful air from oil and gas operations. Simply put, meaningful state standards need to be backed by meaningful monitoring and enforcement.”

Battlement Mesa resident Dave Devanney was among those calling for both stronger rules to limit methane and ozone leaks and for statewide application of regulations. Devanney is the chair of Battlement Concerned Citizens, a group that has been working to protect the community as natural gas drilling has increased.

Devanney spoke as a member of a community that has experienced significant disruption from energy development. Multi-rig natural gas well pads have been located near and within the community, some some less than 1000 feet from homes. Battlement Mesa, an unincorporated planned community in western Garfield County where there is significant natural gas drilling.

“We live with the noise and bright lights during the drilling operations, and then there is the truck traffic – which is constant,” Devanney said. “ Large tanker trucks generally hauling produced water 24/7 — not what you want to see driving through your neighborhood.”

Devaney said that by far the greatest negative impact has been odors — from emissions and during fracking and flow-back operations — especially during evening hours when the winds are generally calm and the fugitive emissions drift from the well-pads to the neighboring homes.

“The Western Slope deserves the same protections that you have passed for the Front Range,” Devanney told the AQCC. “The once in-a-lifetime [of a well] LDAR (leak detection and repair) inspection policy for the Western Slope means that hundreds of emission sources on the Western Slope will never be monitored again – further endangering Western Slope air quality.”

SHER Task Force member Matt Sura represents LOGIC (League of Oil and Gas Impacted Coloradans based in Denver), Western Colorado Alliance (based in Grand Junction), and San Juan Citizens Alliance (based in Durango) — three organizations that work with communities around the state dealing with the impacts of oil and gas development.

Sura called on the AQCC to direct the SHER Task Force and state staff to develop tighter regulations for wells within a quarter mile of communities. He also pointed out that the oil and gas industry has resisted even annual inspections of smaller wells in rural Colorado.

“I have a lot of hope that the SHER process will be successful,” Sura said. “However, industry has already indicated that it may not be cost effective for them to increase inspections even to once a year for smaller wells on the Western Slope and they have refused attempts to increase safeguards when wells are in close proximity to homes.”

“I ask once again that you direct staff to begin work on rules that will increase emission controls, inspections, and faster repair times in the event an oil and gas location is within 1,320 feet of a home. I think the time has come for our state to put public health and safety before cost efficiency.”