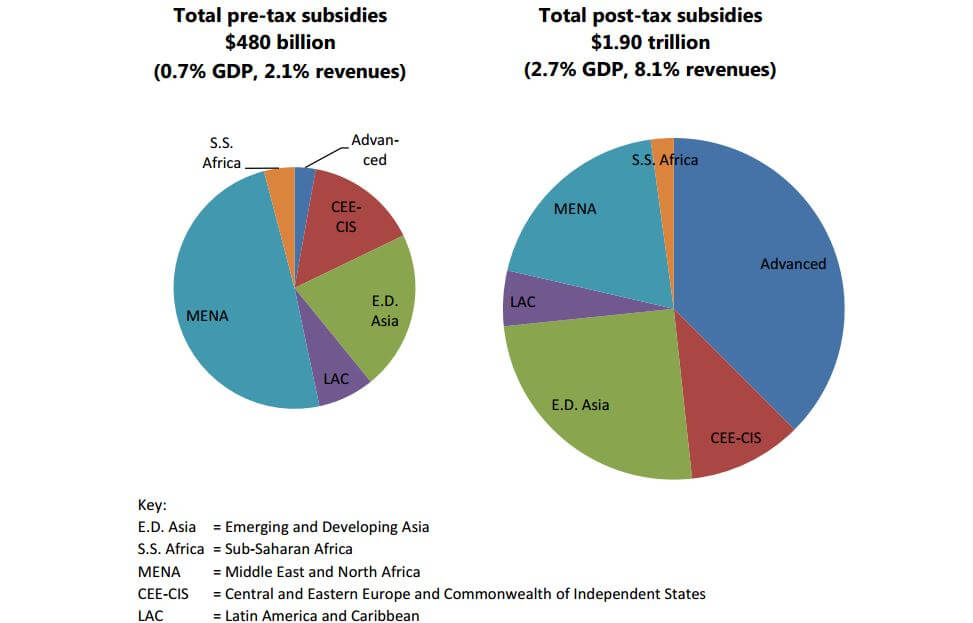 When the topic of renewable energy subsidies comes up, someone in the room invariably points out that such subsidies give renewables an unfair advantage over fossil fuels in the “free market.”

This argument, while good sport for ideologues, usually leaves out one little data point. How much in subsidies does society hand out to non-renewable energy companies?

To find our answer, let’s play an addition game. Get a piece of paper and pen. Starting with the number 1 million, add another million to your rolling total every minute. Continue this task for a grueling three and a half years and you will arrive at your destination: 1.9 trillion.

$1.9 trillion is the amount of subsidies dolled out to traditional petroleum, electricity, natural gas and coal companies globally in 2011.

To put this number in context, these subsidies are equivalent to the combined 2013 gross domestic products of 117 countries.

Lest you prematurely throw China under the bus (another pundit pastime), the Biggest Subsidizer Award goes to yours truly – the United States of America. The U.S. ponied up $502 billion for its favorite industries, while China clocked in a distant second with $279 billion.

I bring all of this up for two reasons.

First, I am tired of people defending the obscene profits of fossil fuel companies as a testament to their superior management abilities.

There is such a thing as “too good to be true.” Profits of $225,000 every minute – the earnings of the top five oil and gas companies in 2012 – are not a testament to superior management chops unless Enron and Bernie Madoff are your chosen exemplars of management acumen.

These absurd profits are the direct result of the subsidies fossil fuel companies enjoy, and I for one am tired of writing that check.

Second, renewables will never get a fair chance in a market that so obviously favors the incumbent. The previously mentioned 2013 IMF report summed it up best:

I once listened to a recording of the famed University of Chicago economist Milton Friedman defending economic externalities. His argument went like this: As an entity driven to maximize shareholder value, it is more than a right – it is a responsibility – for corporate managers to exploit every loophole possible to externalize internal costs.

Let us all take Friedman’s words to heart. Corporations will beg, borrow and steal every subsidy in sight while dumping their contaminants into our backyard free of charge. It’s not their fault – it’s their nature.

In such a system – our economic system – citizens and their elected officials play an indispensable role in defending their lands, water, air and health from the onslaught of systematized and lauded greed. Ignore this responsibility at our collective peril.