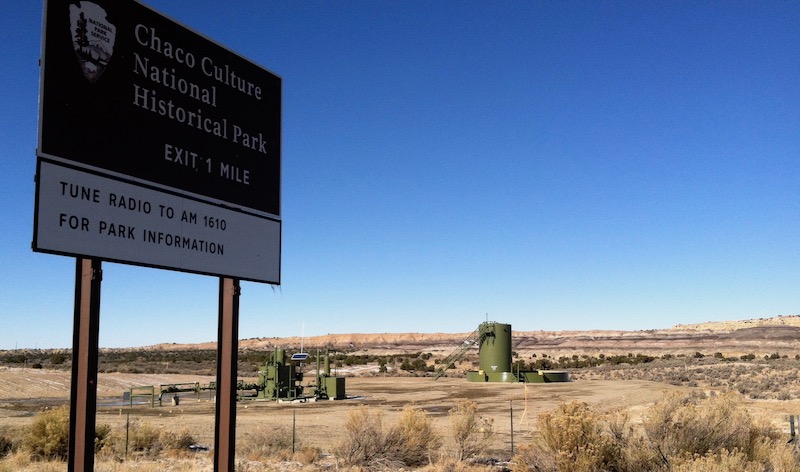 This is great news! Momentum in our decade-long effort to protect Greater Chaco from unbridled (and illegal) oil and gas development is finally resulting in real gains. Back in 2015, along with our partners, we filed a lawsuit against the Bureau of Land Management (BLM) for approving drilling without ever analyzing the impacts of the new technologies.

Today the federal courts ruled in our favor. This is great news for Greater Chaco, for tribal communities, and for the hope of safeguarding irreplaceable cultural treasures and history.

Check out the full press release below on what this means. You can also check out more on our Chaco campaign.

Denver—A federal appeals court today held that the U.S. Department of Interior’s Bureau of Land Management (BLM) illegally approved oil and gas drilling and fracking in the Greater Chaco region of New Mexico, a landscape sacred to Tribes throughout the American Southwest and home to the Navajo Nation.

“We always knew BLM wasn’t doing their job – we watch their violations and non-compliance every day,” said Kendra Pinto of Counselor Chapter House, a member of Diné Citizens Against Ruining Our Environment. “To finally be vindicated by a higher court is the necessary step forward we need. Now we must continue to hold BLM accountable.”

In 2015, Diné Citizens Against Ruining Our Environment, the San Juan Citizens Alliance, WildEarth Guardians, the Western Environmental Law Center, and the Natural Resources Defense Council filed suit to halt BLM’s approval of hundreds of oil and gas wells in the Greater Chaco region.

The suit targeted BLM’s failure to account for the cumulative, region-wide impacts of fracking, including impacts to water supplies, community health, air quality, climate, and cultural integrity of the landscape. In 2014, the Bureau estimated nearly 4,000 fracking wells would be developed in the region, where more than 91 percent of the available land is leased for oil and gas drilling.

Since 2014, the region has faced increased pressure from the oil and gas industry. With the advent of horizontal drilling and hydraulic fracturing of shale formations, companies have encroached closer to Chaco Canyon, filling the region with intense industrial development, bringing more air and water pollution, and increasingly impacting Navajo communities.

With iconic Chaco Canyon and Chaco Culture National Historical Park at its core, the Greater Chaco landscape is where the Ancestral Puebloan peoples thrived over a thousand years ago.

Known for its ruins and other cultural sites, the region remains important and sacred to Tribes throughout the American Southwest, including the Hopi and Dine, or Navajo people who currently reside in the region, and 20 Pueblo nations of New Mexico and Texas, the modern-day descendants of the Ancestral Puebloan people.

“Fracking has been consuming the Greater Chaco landscape, degrading the region’s air, water, and health while purporting to comply with a 2003 Resource Management Plan by the BLM,” said Mike Eisenfeld, Energy and Climate Program Manager for San Juan Citizens Alliance. “This is the last place this kind of destructive industrial development should be happening and is particularly egregious given the BLM’s failure to accurately assess cumulative impacts.”

In 2018, the U.S. District Court for the District of New Mexico rejected the groups’ suit and they appealed the decision to a higher court.

In today’s ruling, the U.S. Court of Appeals for the 10th Circuit reversed the District Court. The Appeals Court held the Bureau of Land Management failed to comply with federal law because it failed to account for the cumulative impacts of fracking in the Greater Chaco, including the impacts of nearly 4,000 new oil and gas wells, and failed to address the impacts of water use associated with fracking.

The court ruled, “We conclude that the 3,960 horizontal Mancos Shale wells predicted in the 2014 RFDS [reasonably foreseeable development scenario] were reasonably foreseeable after the 2014 RFDS issued. The BLM therefore had to consider the cumulative impacts of all 3,960 wells when it conducted its site-specific EAs [environmental assessments].”

“BLM has been approving drilling and fracking permits for years without ever having considered the cumulative impacts to people and the environment,” said Kyle Tisdel, energy program director and attorney with the Western Environmental Law Center. “The Tenth Circuit has acknowledged this unlawful practice, sending BLM back to the drawing board. This is a huge win for Chaco, and the people and communities that call this sacred landscape home.”

All told, the court reversed the approval of 25 drilling permits. However, the case has implications for hundreds of drilling permits that have been approved and are currently under consideration in the region.

“This is a victory for public lands and communities in Greater Chaco,” said NRDC senior attorney Alison Kelly. “The court made it clear that the Bureau of Land Management cannot fast-track drilling and fracking in this region without considering and disclosing to the public the cumulative impacts of its decisions. This is critical to protecting entire communities and landscapes from being forever damaged by the oil and gas industry.”

The ruling comes as political pressure is mounting to permanently protect the Greater Chaco region.

Last month, the New Mexico State Land Office issued a moratorium on leasing oil and gas underneath state trust lands in the area.

Also last month, federal legislation was introduced to protect a core area around Chaco Culture National Historical Park and the U.S. House of Representatives’ Natural Resources Committee held a field hearing on the impacts of oil and gas development to sacred sites and air quality.

“With today’s ruling, the case for protecting Greater Chaco is stronger than ever,” said Rebecca Sobel, senior climate and energy campaigner for WildEarth Guardians. “This win is another huge step forward to ensuring the cultural integrity of this landscape is sustained and our air, water, and climate fully protected.”