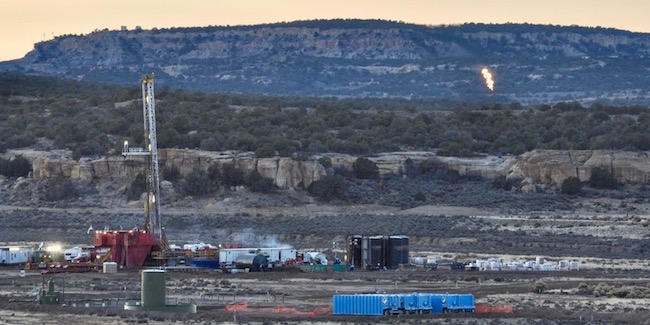 By Erika BrownJanuary 18, 2017No Comments

The greatest concentration of methane in the country floats above us here in the Four Corners. Although we can’t see it, it’s not harmless. In addition to being a powerful greenhouse gas, over 80 times more potent than carbon dioxide, it’s released along with co-pollutants that are harmful to human health. Moreover, the flaring, venting and leaking of natural gas, which is primarily methane, is a massive waste of a valuable resource. That wasted product also does not generate royalty dollars on which local and state economies depend.

The Bureau of Land Management finalized the BLM methane rule back in November that included common sense regulations for reducing waste. Immediately, oil and gas industry groups sued and then asked for a preliminary injunction to stop the rule from going into effect. Yesterday, the court rejected that request and the rule went into effect as planned.

We are a part of a coalition of environmental groups who have and will continue to defend this important rule. See the full press release below.

Two oil and gas industry groups challenged the rule in Wyoming federal court within 40 minutes of its release on Nov. 15, 2016. Soon thereafter, the states of Montana, Wyoming, and North Dakota also challenged the rule. Later that month, the industry groups and states asked the court to impose a preliminary injunction to halt implementation of the rule. Yesterday afternoon, Judge Skavdahl denied that preliminary injunction.

The rule is projected to reduce the $330 million of taxpayer and tribal owned natural gas currently wasted annually, saving and putting to productive use enough natural gas to supply nearly 740,000 homes for a year. This captured gas will increase royalties used to support public education and other public services. Because methane, the main component of natural gas, is a climate pollutant over 80 times more potent than carbon dioxide, reducing methane waste also safeguards our climate. The rule will also result in reduced pollution and unsightly and noisy flares in the communities closest to oil and gas drilling operations. All these benefits are secured through sensible standards that harness the power of available, low-cost technologies and practices that are already being deployed by some states and industry members. Notably, two major oil and gas producing states, New Mexico and California, have intervened to defend BLM’s rule alongside the public health and environmental groups.

“The fight to defend BLM’s methane waste rule is just beginning, but this is a welcome development and confirms that precipitous action to halt the rule is not warranted,” said Erik Schlenker-Goodrich, executive director of the Western Environmental Law Center. “Ultimately, BLM has an obligation to ensure that oil and gas companies minimize the waste of public resources like methane. These rules do just that, establishing modernized standards to produce more energy, increase government royalties, and benefit communities and industry alike.”

“It is imperative for those of us who live within the four corners region of the U.S. to see the methane rule remain intact because we are the people who suffer the health and environmental disparities caused by excessive methane emissions in our predominantly Navajo region,” said Carol Davis of Diné Citizens Against Ruining Our Environment.

“Wyoming lost out on more than $60 million in royalties over the last five years due to venting, flaring and leaks on federal lands, according to estimates compiled by the Western Values Project,” said Chris Merrill, associate director of the Wyoming Outdoor Council. “This is the state’s share of an overall $120 million in foregone federal royalties in Wyoming during that time period. Reducing waste will ensure Wyoming gets its fair share of royalties and severance taxes. We rely on those funds for our schools and other essential services. We can’t allow so much of it to be wasted.”

The groups defending the methane rule include:

A copy of the order denying the preliminary injunction is available here.