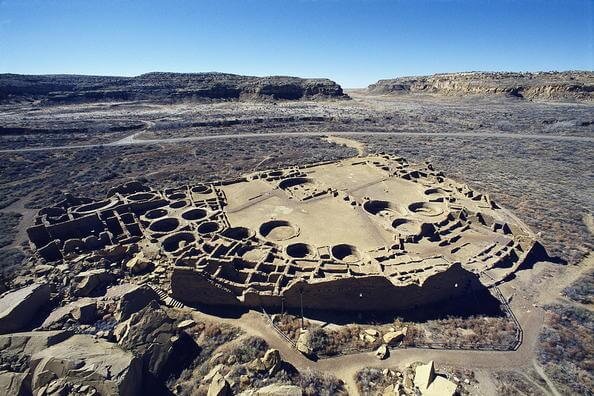 Is it everything we hope for? No, but it is undoubtedly a significant step forward. We’ll continue to use all the tools we have to fight for permanent protections in the region. Check out the full press release below with a more detailed response from ourselves and our longtime partners in litigation to protect Greater Chaco.

Check out more on our Greater Chaco Campaign.

Today, the U.S. House of Representatives passed the Chaco Cultural Heritage Area Protection Act (H.R. 2181), which would withdraw federal minerals from new oil and gas leasing within a 10-mile buffer surrounding Chaco Culture National Historical Park. The bill would also provide for the termination of non-producing oil and gas leases within the designated area while acknowledging the Greater Chaco Landscape extends beyond the 10-mile buffer, and recognizes the need for additional health studies on the public health impacts of fracking in the area. Sadly, the Bureau of Land Management (BLM) continues to approve new fracking in and outside of the proposed protection zone while it works toward updating its outdated resource management plans in defiance of a recent defeat in court centered on the issue.

“Public health, environmental justice, and protecting irreplaceable cultural heritage must come before oil and gas profiteering,” said Kyle Tisdel, attorney at the Western Environmental Law Center. “This excellent first step finally acknowledges that the cultural resources of the Greater Chaco landscape extend well beyond the borders of the park. But with more than 91 percent of eligible public lands in the region leased for oil and gas drilling and fracking, this must represent just that: a first step toward comprehensive, permanent protections.”

Reps. Haaland, Torres Small, and Luján spoke in favor of the bill, which passed 245-174 with bipartisan support. The bill will now head to the U.S. Senate for consideration there. In May of this year, Interior Sec. Bernhardt visited Chaco at the invitation of Sen. Martin Heinrich of New Mexico. Shortly thereafter, Sec. Bernhardt announced a one-year moratorium on new oil and gas drilling within the 10-mile “Chaco Protection Zone.” Sens. Udall and Heinrich introduced the bill in the Senate, both long-term champions of land and community protection.

“Expanded fracking across the Greater Chaco landscape threatens our region’s rich cultural history, community health, and Indigenous rights. Today’s vote is an important step toward protecting the region and cultural resources, and we applaud Representatives Luján, Haaland, and Torres Small for their leadership on this issue,” said Miya King Flaherty, organizing representative for the Sierra Club Rio Grande Chapter. “We look forward to continuing to work with our elected leaders to achieve full and permanent protections for the broader Chaco landscape and the people who live there.”

Native and conservation groups’ victory in court to halt drilling and fracking at dozens of wells across the Greater Chaco landscape has helped spark action to protect the region from the landscape-level industrialization it has faced under BLM’s frenzy to approve drilling in the area. BLM bases its approval of drilling and fracking in the area on a 16-year-and 30 year-old resource management plans that explicitly omit analyses of the very drilling techniques being used in the area by oil and gas companies today.

“Today is a great step forward as industrialized fracking continues to besiege the Greater Chaco landscape within and outside the proposed Chaco Protection Zone,” said Rebecca Sobel, senior climate and energy campaigner for WildEarth Guardians. “We’re grateful for our political leaders who are willing to say ‘enough’ to the oil and gas industry’s relentless attacks on our sacred landscapes, climate, clean air, and water.”

The groups have filed a second challenge following their earlier win, targeting hundreds more oil and gas wells across the Greater Chaco landscape. Development of oil and gas wells in this region requires more water, releases more pollution, and poses more intensive environmental impacts than traditional oil and gas development. BLM expects thousands of wells could ultimately be developed in the region.

“We are hopeful that the Senate will do the right thing and pass this legislation next,” said Mario Atencio, board member for Diné Citizens Against Ruining Our Environment. “H.R. 2181 is supported by the Navajo Nation President, Delegate Daniel Tso, and Counselor Chapter, the chapter that is being most affected by oil and gas activities.”

The Navajo Nation, All Pueblo Council of Governors, and many others have urged a region-wide moratorium pending BLM’s completion of a new resource management plan that accounts for the cumulative impacts of oil and gas development here.

“Today’s vote marks a significant step in the fight to defend the Greater Chaco Landscape from industrialized fracking, said Mike Eisenfeld, climate and energy director for San Juan Citizens Alliance. “Moving forward, we must ensure that comprehensive and lasting protections are put in place across this entire living landscape to protect the public health and cultural resources of communities in northwest New Mexico”