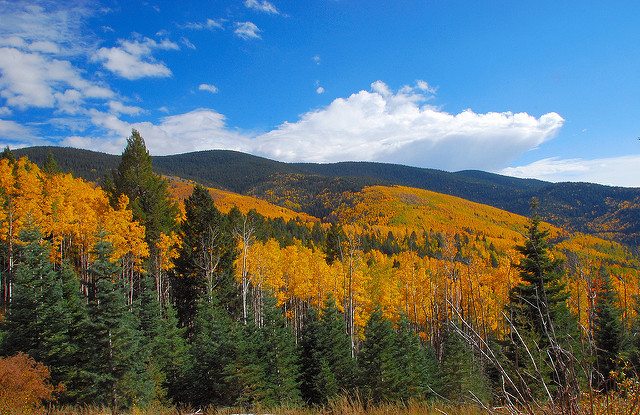 The Bureau of Land Management in Farmington, NM hasn’t updated it’s 2003 Resource Management Plan (RMP) since horizontal fracking technologies became viable in the Four Corners. Currently, they are revising the RMP to reflect these new technologies. Yet, at the same time, they are authorizing the use of these practices in the Santa Fe National Forest and Greater Chaco region.

The most recent lease sale is for more than 20,000 acres of oil and gas leases on the Santa Fe National Forest (despite more than a hundred protest letters). Because the RMP isn’t yet updated these lease parcels will escape proper environmental review, so we’re suing. We won’t tolerate drilling without a plan.

The Bureau of Land Management and U.S. Forest Service auctioned more than 20,000 acres of oil and gas leases on the Santa Fe National Forest in 2015 despite more than a hundred protest letters from citizens and organizations. The lease sale perpetuates a dangerous pattern of federal agencies erroneously relying on the grossly outdated 2003 Farmington resource management plan (RMP) to facilitate a rush to frack New Mexico’s Mancos Shale in advance of a true analysis of the impacts of modern fracking technologies.

The 2003 RMP specifically excludes analysis of horizontal drilling and multi-stage fracking, as these technologies were unfeasible and uneconomic 13 years ago, and as such, does not reflect the realities of today’s practices. BLM is currently writing an amendment to the RMP to reflect these new technologies—admitting that the 2003 RMP is obsolete. Yet, this hasn’t stopped the agency from using the outdated plan to authorize oil and gas activity on public lands in the Santa Fe National Forest and the Greater Chaco region.

“We’re seeing the same intellectually dishonest techniques here from the administration as those used to green-light unstudied fracking in the Greater Chaco region,” said Kyle Tisdel of the Western Environmental Law Center. “This is a clear attempt to circumvent meaningful environmental review for fossil fuel extraction on our public lands in northern New Mexico, consequences be damned. Our conscience demands we step in to stop this.”

“With the Santa Fe National Forest being targeted for fracking, it’s clear the oil and gas industry believes there is no place sacred in the American Southwest,” said Samantha Ruscavage-Barz, staff attorney for WildEarth Guardians. “With our climate and our future at stake, we’re taking a stand with this lawsuit and we sincerely hope the Obama administration reconsiders its decision to sacrifice our public lands.”

Horizontal drilling and multi-stage fracking uses hundreds of thousands of gallons of highly pressurized water and toxic chemicals to shatter underground geology. This toxic cocktail includes known carcinogens and chemicals harmful to human health. If a wellbore is not properly sealed and cased, or its integrity is otherwise compromised, these chemicals can escape as they move through the wellbore, risking groundwater contamination.

“Leasing in the Santa Fe National Forest by the BLM continues a reckless practice of leaping before looking, putting communities in the Cuba, New Mexico area at risk from oil and gas industrialization and significant adverse impacts,” said Mike Eisenfeld, Energy and Climate Program manager of San Juan Citizens Alliance.

“As oil and gas activity creeps toward Santa Fe and Albuquerque, it is critical that the federal government be held accountable at the lease stage for protection of our land, water, air, culture and communities.”

“The Santa Fe National Forest manages one of the largest collections of heritage sites in the United States,” said Katie Schaefer of the Sierra Club. “This is a legacy that is central to the history and traditional practices to native people living here. The footprint of development is already altering that landscape in advance of BLM’s resource management plan revision.”

“Unwise oil and gas development in our headwaters can destroy key water resources – such as high priority wetlands – and puts the future water supply for downstream New Mexico communities and ecosystems at risk,” said Rachel Conn, projects director for Amigos Bravos. “Instead of being ripped up for short term profits, the headwaters found in the Santa Fe National Forest should be maintained so they continue to provide water for wildlife, agriculture, and families.”

The groups filing suit today include the San Juan Citizens Alliance, Diné Citizens Against Ruining Our Environment, Amigos Bravos, WildEarth Guardians, and the Sierra Club. The challenged leases would expand oil and gas drilling and fracking into previously undeveloped areas of the Santa Fe National Forest on the remote and steep west side of the Jemez Mountains north of Cuba and near the San Pedro Parks Wilderness.

A copy of the complaint is available here.