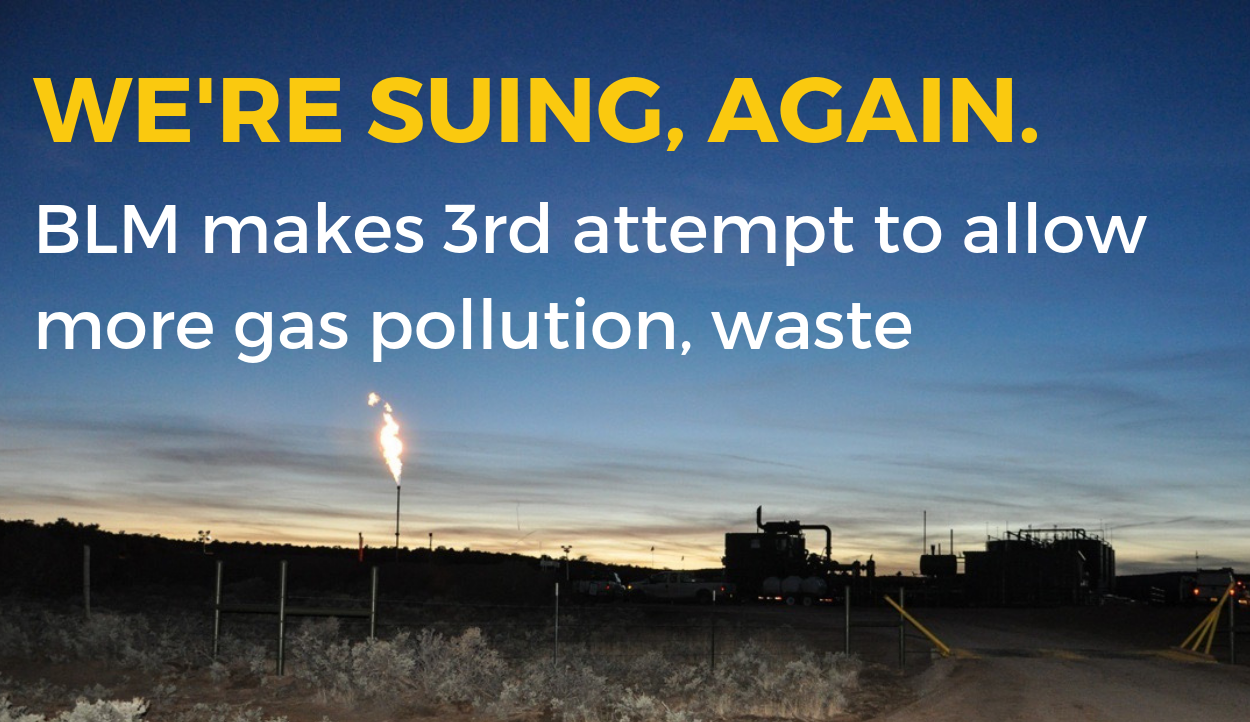 By Erika BrownOctober 1, 2018No Comments

Again? Yes, again. It’s hard to keep track how many times and in how many different ways this administration has attempted to gut the two common-sense methane rules established under the Obama Administration. Secretary Zinke has tried, and failed, twice to get rid of the BLM Methane Waste Rule. This latest attempt is just as illegal as the first two attempts.

We told you we’d continue to fight for strong methane rules. It’s critical for our climate, our health and even helps generate more tax dollars for our communities. So here we are, again. And in good company, with California and New Mexico also suing. We couldn’t do this level of work without YOU speaking out at every opportunity. And we are grateful to be a part of this amazing coalition of groups resisting, over and over again. You can see the full press release below.

Learn more about the Methane Hotspot

SAN FRANCISCO―A broad coalition of conservation and citizens’ groups sued the Trump administration late on Friday to challenge the Bureau of Land Management for rescinding most provisions of its 2016 methane waste rule.

“Secretary Zinke’s actions speak louder than his hollow claims to a conservation ethic in the mold of Teddy Roosevelt. He gutted the methane rule to give industry free rein to do what it wants, in contempt of the public’s unquestioned desire for strong methane waste and pollution safeguards,” said Erik Schlenker-Goodrich, executive director of the Western Environmental Law Center. “Zinke should leave the rule in place to safeguard the public interest and to ensure that Americans receive their fair share of oil and gas production royalties.”

In the legal challenge, the groups said the rescission violates federal law by downplaying the significance of the rule’s benefits to public health, local communities and the climate. The lawsuit also says BLM’s cost-benefit analysis ignored global climate costs. The original rule sought to improve public health by reducing atmospheric methane, which is 80 times more potent than carbon dioxide.

“It’s shameful that Zinke is trying to gut this crucial protection for our lungs and our climate,” said Michael Saul, a senior attorney at the Center for Biological Diversity. “Doing away with the methane rule puts oil industry profits ahead of the future of our children and the planet. We believe the courts will shoot down this outrageous and unlawful effort to increase dangerous pollution from oil and gas wells on America’s public lands.”

The coalition’s litigation seeks to reinstate the 2016 rule to reduce methane waste and pollution and address the longstanding problem of reduced production royalties caused when the fossil-fuel industry wastes publicly owned methane.

The U.S. Government Accountability Office estimates lost royalties at nearly $23 million annually under the pre-2016 regime. The 2016 rule would have helped taxpayers reclaim about $800 million in royalties over the next decade.

Zinke claims voluntary measures like the Environmental Protection Agency’s Natural Gas STAR program are sufficient to reduce methane waste and pollution. But only 10 of the more than 475 oil and gas producers in New Mexico participate in the program.

“Communities here in the Four Corners, under the methane hot spot, have spoken out again and again in support of common-sense protections from unnecessary methane waste,” said Mike Eisenfeld of San Juan Citizens Alliance. “We are being harmed by unnecessary air pollution and its public health consequences, and our tax dollars are being needlessly wasted. Yet the administration fails to hear us. Rescinding this rule sends a strong message that industry is valued over the health of our communities.”

The BLM has been aware of methane waste and pollution problems since at least 2010, when the GAO identified BLM’s lack of consistent and effective regulatory safeguards as a major source of this problem. In 2014 oil and gas companies wasted more than 4 percent of the gas they produced on federal lands, “sufficient gas to supply nearly 1.5 million households with gas for a year,” according to the Interior Department.

The 2016 rule was crafted over four years with input from the oil and gas industry. It accounted for nearly 300,000 public comments and earned approval from 75 percent of Westerners.

“BLM is ignoring its legal obligation to prevent methane waste, protect the public resources, and protect the pocketbooks of taxpayers. Instead BLM is handing its authority over to states that have a patchwork of ever-changing, often extremely weak state rules,” said Anne Hedges, deputy director of the Montana Environmental Information Center. “Compared with the extensive public process and carefully crafted 2016 rule, the new rule reflects a careless, predetermined, and politically motivated giveaway to oil and gas companies at the expense of the public interest and our pocketbooks. This is a typical Zinke move.”

“With the methane safeguard rollback, Interior Secretary Zinke just sacrificed public health and climate for oil and gas industry profits,” said Earthworks Policy Director Lauren Pagel. “Even with BLM methane safeguards in place, we’re not doing enough to prevent catastrophic climate change. To do that, we must end the oil and gas era and make a just transition to the 100 percent renewable economy as soon as humanly possible. But the first rule of getting out of a hole is to stop digging. Unfortunately Zinke just replaced a shovel with a backhoe.”

“Oil companies operating in our national parks, forests, and other public lands should be held to the highest environmental and health standards,” said Jeff Kuyper, executive director of Los Padres ForestWatch. “The Trump administration’s rollback gives the oil industry a free pass to continue polluting our air, compromising our climate, and needlessly leaking and wasting a shared public resource.”