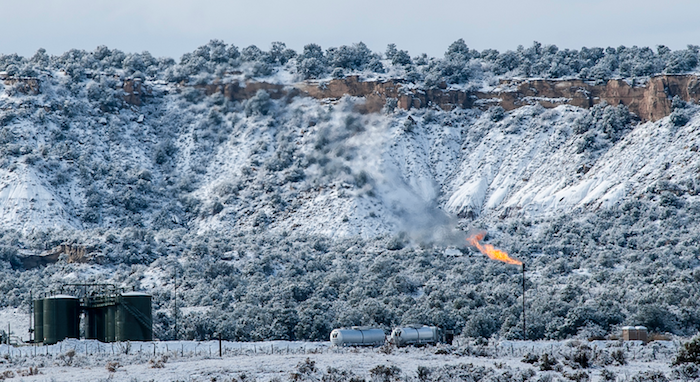 Cue the third branch of government.

When you have an administration willing to defy law in order to pursue industry’s agenda, checks and balances become increasingly important. That’s why when the BLM announced an illegal indefinite postponement of their methane waste rule, we joined forces with other conservation and public interest groups willing to take the fight to court.

The Trump Administration not only denies the clear science of climate change, but also doesn’t seem to care much about public health and safety. Here in the Four Corners, under the methane hotspot, our money is being wasted and our health is being sacrificed for the convenience of industry. And climate change (it’s real) is threatening our water security.

Not only is suspension of this rule immoral, it’s illegal. We’re in this fight for the long haul.

Read the full press release below.

The Trump administration has decided to indefinitely postpone a rule that requires oil and gas companies to minimize waste and fix leaks from oil and gas development on public land—a decision that violates federal law.

A broad coalition of conservation and public interest groups have joined the states of California and New Mexico in challenging the U.S. Department of the Interior’s move to indefinitely suspend implementation of the Bureau of Land Management Methane Waste Prevention Rule. The BLM, under the Trump administration’s direction, has provided notice that the rule, which is already in effect, will be postponed pending judicial review in the District of Wyoming, a move that runs counter to what is allowed under federal law.

The BLM waste rule, finalized in 2016, updates antiquated, 30-year old regulations. It requires companies to fix leaky, faulty equipment and reduce natural gas waste on public lands. According to the U.S. Government Accountability Office, enough natural gas was unnecessarily wasted and leaked between 2009 and 2015 to serve more than 6 million households for a year. The updated waste rule requires companies to perform leak detection and repair with affordable, off-the-shelf technologies, and restricts methane venting (deliberately releasing gas into the atmosphere), and flaring (burning off gas unused at the wellhead). The Trump administration’s decision not to enforce the BLM waste rule would allow industry to avoid these common-sense waste reduction measures, and continue to unnecessarily waste our publicly owned resources. Methane waste not only shortchanges taxpayers, it harms public health and contributes significantly to climate emissions.

The delay comes after requests made to Interior by the American Petroleum Institute and Western Energy Alliance, two oil and gas trade associations. Notably, the oil and gas industry failed in two prior attempts to derail the rule. In January 2017, a federal judge in the U.S. District Court for the District of Wyoming denied a motion to enjoin the methane rule. In May 2017, the U.S. Senate voted to reject legislation advanced under the Congressional Review Act to eliminate the rule.

“Interior’s BLM methane waste rule delay flies in the face of overwhelming public support, Congress’ recent rejection of an attempt to repeal the rule, a federal court’s determination that an injunction halting implementation of the rule was not warranted, and, fundamentally, core precepts of federal law” said Erik Schlenker-Goodrich, executive director of the Western Environmental Law Center. “Methane waste seriously and urgently threatens our climate, our pocketbook, and public health. If there was any doubt who Sec. Zinke serves in his position, it’s now abundantly clear it’s not the American public.”

“The methane waste rule delay is yet another action taken by the Trump Administration that aids oil and gas operators at the expense of the American public, and especially children, whose health is negatively impacted by the industry’s wasteful practices,” said Darin Schroeder, attorney with the Clean Air Task Force who is co-representing National Wildlife Federation.

“The waste of natural resources is something everyone should oppose, especially those who are concerned about the federal budget. Our natural resources shouldn’t be wasted just because it’s convenient for oil and gas companies. There are simple ways to avoid wasting these public resources and this rule finally requires companies to implement those measures. Delay only hurts the American public and our coffers,” said Anne Hedges, with the Montana Environmental Information Center.

“Methane pollution is invisible to the naked eye, so we can’t always see the enormous waste of our natural resources on public lands. But infrared technology exposes leaks, venting and dirty flares at oil and gas sites. I’ve seen the pollution, from California to New Mexico, Texas to Pennsylvania. People are getting sick because of leaky valves, tanks and wells. BLM needs to plug the leaks now,” said Jennifer Krill, Earthworks’ executive director.