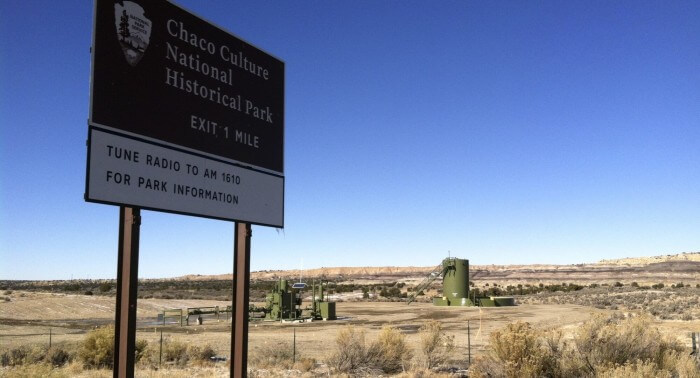 Rampant and unplanned drilling is threatening archeological sites and communities around Chaco. Despite the pleas of many, the BLM continues to permit drilling without assessing the impact to those sites, the environment or nearby communities.

So, we’re suing them.

Below is the joint press release we put out with our partners on this.  For more background on the issue, see our blog last month – Dereliction of Duty: BLM’s Management of Oil and Gas around Chaco.

Santa, Fe, NM—A coalition of local, regional, and national watchdog groups filed suit today to put the brakes on the U.S. Bureau of Land Management’s ongoing approval of fracking in the Greater Chaco region of northwestern New Mexico. The suit comes as community members and organizations today are rallying at the New Mexico State Legislature in support of a moratorium on fracking in Greater Chaco.

“Our clean air, pure water, and a safe climate are being fracked away,” said John Horning, Executive Director of WildEarth Guardians. “The Bureau of Land Management has to stop putting the oil and gas industry ahead of our public lands and our future.”

Filed in federal court, the suit challenges the Bureau of Land Management for illegally authorizing a surge of new fracking in the Greater Chaco region. Home to Chaco Canyon, extensive Ancestral Puebloan ruins, and Navajo communities, the region is considered the cultural heart of the American Southwest.

Over the last two years, the Bureau of Land Management has approved more than 130 new fracking proposals, primarily near Lybrook and within 20 miles of Chaco Canyon. This, despite the agency’s acknowledgment that it has never analyzed how this development will impact public health and the environment, and has no plan in place to protect the regions’ air, water, and communities.

“The Bureau of Land Management is not taking serious consideration of the sacredness of the Greater Chaco region and the impacts on surrounding Diné communities as they continue to approve more drilling and fracking,” said Colleen Cooley with Diné Citizens Against Ruining Our Environment. “It’s time to account for what really matters, our health, our environment, and future generations.”