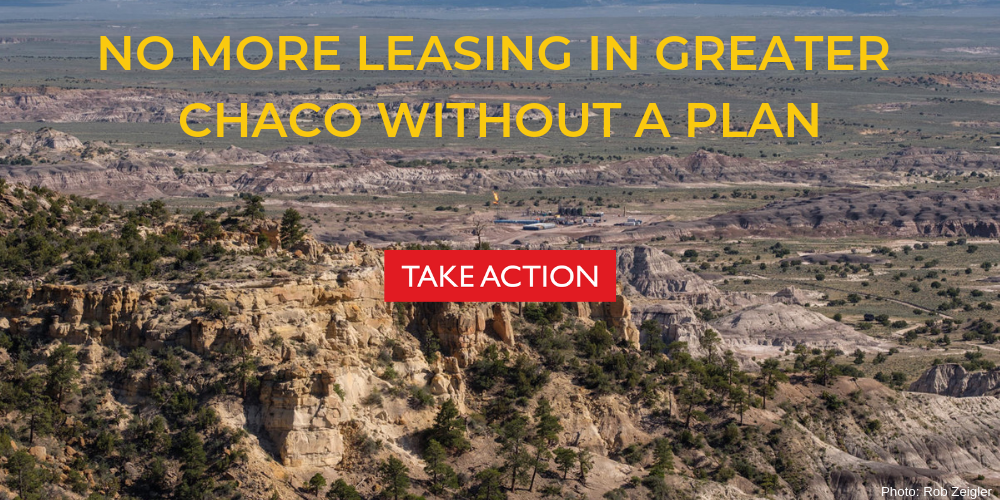 Take Action: Speak Out Against Lease Sale in Greater Chaco

It’s time to speak out in defense of Greater Chaco again.

The Bureau of Land Management (BLM) Farmington and Rio Puerco field offices in northwestern New Mexico continue to allow oil and gas companies to frack without a plan in the Greater Chaco region. Once again the BLM is offering dozens of parcels for lease in Greater Chaco this March. They are pushing ahead with this lease sale despite the recent federal government shutdown, during which they provided no information to the public about the sale.

Over 93% of public lands in northwestern New Mexico are already leased for oil and gas development. There is NO plan for protecting the air, land, water, cultural resources, or communities.

Please go to our Faces of Chaco Action

Communities in the Greater Chaco experience myriad impacts from existing oil and gas extraction, including increased respiratory problems, poor air quality, destroyed roads and unsafe traveling conditions, damage to sacred landscapes, and much more. Time and time again, the BLM has failed to meet its commitment to consult with tribal governments and impacted communities, and to conduct the required cultural study of this unique landscape. In fact, one year ago then-Interior Secretary Zinke deferred the March 2018 lease sale, admitting that there had not been sufficient cultural consultation and study in the Greater Chaco region. But to date, there has not been a single attempt by the BLM to survey over 5,400 cultural resources in the region.

Under the Trump Administration, the BLM has rolled back opportunities for public involvement. The BLM has shortened public comment periods, constrained options for comment submission, and completely eliminated comment periods for draft National Environmental Policy Act analyses. For this lease sale, the public has only 10 days to submit protest comments and they cannot be emailed, so we need you to act fast to tell the BLM to cancel the March 2019 lease sale.

We will print out your comment and make sure it gets hand-delivered to the BLM State Office by the February 20th deadline.

Join SJCA and partners at the New Mexico Public Lands Rally on February 20th, where we will gather all protest comments for the March 2019 lease sale to be delivered to the BLM.