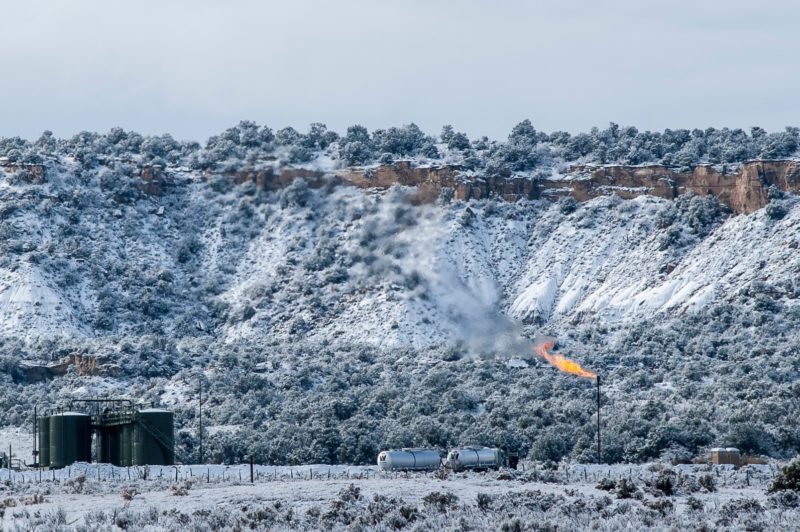 By Katie PellicoreSeptember 3, 2019No Comments

Why should we care about methane, exactly?

Remember that methane hotspot floating over the Four Corners region? Explosive growth in the oil and gas industry have contributed to some of the highest levels of methane emissions in the country, ultimately resulting in a giant cloud of methane hanging over our heads here in the Four Corners – so big it can be detected from space.

It’s not just a problem in western Colorado, either. Just this month, the US Environmental Protection Agency (EPA) proposed reclassifying the Denver region as a “serious” violator of federal health standards because of its high ozone levels. Methane is concurrently released with other volatile organic compounds (VOCs), both of which contribute to ground-level ozone pollution, a type of ozone that harms human health and worsens climate change. In 2018, the ozone in Colorado was so bad that the state issued warnings against outdoor exercise on an average of more than once a week. VOCs are also linked to serious health problems like cancer, respiratory diseases, and neurological damage.

Methane is more than a health problem: it’s a serious contributor to climate change. In the first twenty years after it is emitted, methane is 84 times more potent than carbon dioxide. Curbing methane is therefore an effective way to reduce greenhouse gas emissions, especially in the short term.

While methane is emitted by many sources, the oil and gas industry is one of the biggest and most preventable culprits. Methane is the primary component of natural gas and is emitted into the atmosphere during every stage of natural gas production from extraction to distribution. Natural gas wells are often improperly cased, leading to methane leaks. Other wells are actually designed to vent or flare (burn to convert it into slightly less harmful carbon dioxide emissions) excess methane into the atmosphere. Natural gas found alongside oil is also frequently wasted. Often, without the infrastructure to capture the valuable gas, the oil is sent to market while the gas is vented or flared.

All that wasted methane adds up, and not just in terms of climate impacts: enough methane is leaked every year to fuel 10 million homes, and that lost gas is valued at an estimated $2 billion. It doesn’t have to be that way- industry could cut methane emissions by 40% at an average annual cost of less than one cent per thousand cubic feet of produced natural gas. Such a reduction would save consumers over $100 million dollars per year. Cost-effective solutions exist, now it’s a matter of demanding them.

Under the Obama Administration, the EPA and Bureau of Land Management (BLM) both implemented methane rules in 2016 to limit methane waste. Under the current administration, those rules are being rolled back and replaced with weaker versions. For now, we have to rely on states to take the lead to control methane emissions. This article focuses on Colorado’s regulatory process, but New Mexico is also moving forward with stronger methane rules.

Colorado was the first state to regulate methane emissions from oil and gas sites, and those 2014 rules have been touted as a gold industry standard. Unfortunately, they’re just not strong enough. If we want to breathe cleaner air, act proactively against climate change, and improve the quality of life for residents across the state, we need stronger protections against methane waste.

Stronger protections could be on the way

House Bill 1261 sets new greenhouse gas emissions goals, and directs that 2050 emissions must be 90% below 2005 levels. It directs the AQCC to implement policies and rules to attain these goals.

Perhaps most significant for methane reductions, though, was Senate Bill 181. The details here can get a little wonky, but it’s important to know what’s going on in order to hold industry and our regulatory agencies accountable.

Senate Bill 181 protects public welfare by more robustly regulating the oil and gas industry. Specifically, it directs the AQCC to adopt new rules to minimize the emissions of methane and other hydrocarbons and VOCs. It also directs the AQCC to consider certain strategies to reduce emissions, such as:

While these bills set the groundwork for strong methane regulations, nothing is set in stone. At an early stakeholder meeting this July, robust initial rules to cut methane emissions were proposed to the AQCC. New rules were proposed regarding:

This is a vigorous first round of rules, but nothing is guaranteed. There is still potential for the proposed rules to get watered down before being formally adopted. As the AQCC schedules its fall rulemaking and stakeholder engagement meetings, it is imperative that the proposed rules stay strong.

The division will be looking for public participation at many of its meetings moving into the fall, and there will be opportunities to submit comments online. It is critical that we show strong support for methane regulations that benefit our environment and our communities here in Colorado. Stay engaged, and make sure your voice is heard! To learn about upcoming events in your area, and to find more ways to get involved, visit the AQCC website.