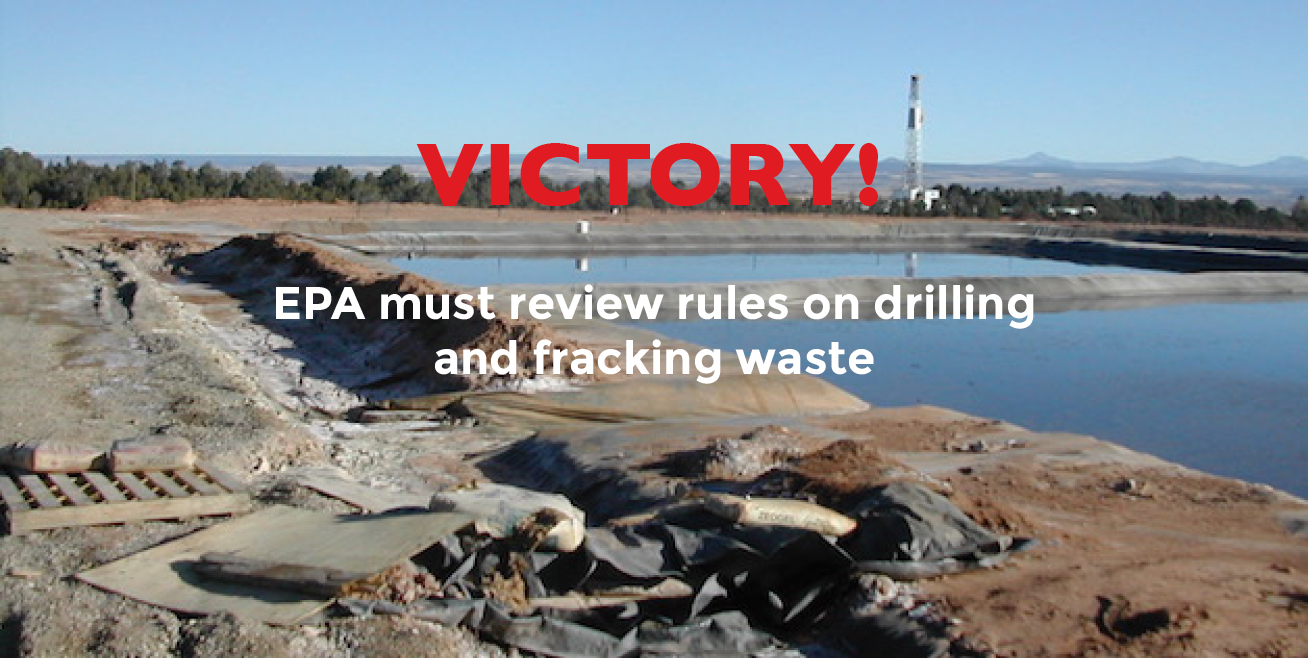 Oil and gas wastes are exempt from hazardous waste regulations. What?

They shouldn’t be. Fracking and oil waste contain dangerous chemicals that are injected back into the grounds, stored in pits and even sprayed on roads. There are 13,379 oil and gas waste pits in Colorado alone, over half of which have no status listed, indicating minimal tracking and oversight.

Back in 1988 the Environmental Protection Agency (EPA) deemed the current rules (generic solid waste provisions) inadequate. And that was before the fracking boom drastically increased the quantity and toxicity of waste, which we now understand literally shakes the earth. The EPA agreed to update the rules and review them every three years.

In May of 2016, we joined several partners in suing the EPA over their failure to update or review regulations for the disposal of oil and gas waste in nearly 30 years.

As 2016 wound to a close, a federal court approved a consent decree requiring the agency to review the regulations, and if deemed necessary, revise them. Finally!

Now, it is entirely possible that the agency under a new administration may declare current regulations are sufficient. If that is the case, or if revisions fail to adequately protect human and environmental health, we will hold them accountable. The law and science are on our side. And we’ll keep fighting to ensure the best protections for our communities.

WASHINGTON, D.C. (December 29, 2016) – Late Wednesday, the U.S. District Court for the District of Columbia formally approved a consent decree between the U.S. Environmental Protection Agency and a coalition of community and environmental organizations. The consent decree requires the agency to review and, if necessary, revise its rules for the disposal and handling of dangerous and harmful oil and gas wastes, such as those that result from drilling and fracking. The organizations had filed a federal lawsuit against EPA in May due to the agency’s failure to review these rules for nearly thirty years.

“This consent decree is a step in the right direction toward fulfilling EPA’s duty to the public,” said Adam Kron, senior attorney at the Environmental Integrity Project. “EPA has known since 1988 that its rules for oil and gas wastes aren’t up to par, and the fracking boom has made them even more outdated. Our communities deserve the best possible protections for their health and the environment.”

In their lawsuit, the organizations raised a number of different wastes and industry practices that new rules should address, including the disposal of fracking wastewater in underground injection wells, which accept hundreds of millions of gallons of oil and gas wastewater and have been linked to numerous earthquakes in Arkansas, Colorado, Kansas, New Mexico, Ohio, Oklahoma, and Texas The organizations also urged EPA to ban the practice of spreading fracking wastewater onto roads or fields, which allows toxic pollutants to run off and contaminate streams, and to require landfills and pits to be built with adequate liners and structural integrity to prevent spills and leaks into groundwater and streams.

Dan Olson, Executive Director of San Juan Citizens Alliance, says “Safeguards to protect our scarce water resources in the San Juan Basin, home to 40,000 wells, have been ignored for far too long. Updating rules for oil and gas waste, deemed inadequate 30 years ago, is critical for this region.”

“We are pleased that the Court approved the parties’ agreement,” said Amy Mall, senior policy analyst at the Natural Resources Defense Council. “EPA is long overdue to take a closer look at the unique risks posed by oil and gas waste. We will hold the incoming administration accountable for heeding this call, and we will continue to fight to ensure communities get the protection they need from this toxic mess.”