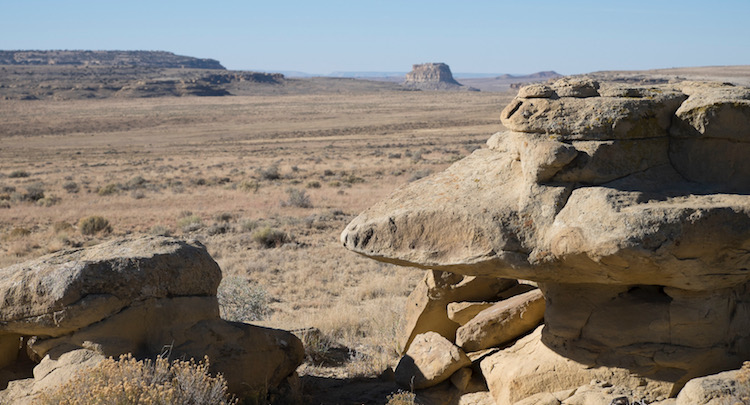 Zinke’s Bureau of Land Management (BLM) will hold a lease sale in Greater Chaco this December, despite failing to conduct tribal consultations they deemed necessary when cancelling the much smaller March 2018 lease in the region. Along with our partners, we signed on to technical scoping comments opposing the sale. We’ll continue to fight against drilling in this region, which is already over 90% leased, until common sense protections are in place for modern native communities, cultural resources, air and water. You can see the full press release below.

Learn more about living with oil and gas in Greater Chaco through our Faces of Chaco project. Then, demand a moratorium on drilling until proper protections are in place.

Farmington, NM — After deferring a lease sale for fracking in the Greater Chaco area scheduled for March 2018 due to a need for more cultural study and consultation, the Department of the Interior’s Bureau of Land Management (BLM) plans to hold another sale this December in the same region, and in expanded drilling areas, despite the fact that no additional study has occurred.

The March sale, which would have auctioned off 4,434 acres of land for oil and gas extraction in the Greater Chaco landscape, attracted an unprecedented number of protests due to threats to public health and cultural history posed by expanded fracking. In response to public pressure and calls from New Mexico Senators Udall and Heinrich, Interior Secretary Ryan Zinke announced that the sale would be deferred pending more cultural consultation, noting that, “this area certainly deserves more study.”

But this month, BLM scheduled a lease sale to take place in December for over 98,000 acres, including over 45,000 acres within the Greater Chaco area. Four of the lease parcels are within 10 miles of Chaco Culture National Historical Park. Despite Secretary Zinke’s claim that more study was needed, no additional study has taken place.

“Expanded fracking in Greater Chaco further threatens irreplaceable cultural resources, as well as the health and safety of nearby communities. It is unacceptable for Secretary Zinke to pay lip service to the need for cultural review and consultation while still charging ahead with plans to auction off this sacred landscape to the fossil fuel industry,” said Sierra Club Rio Grande Chapter Organizer Miya King-Flaherty. “The fight to protect Greater Chaco from expanded fracking is not over, and we will not back down until there are permanent protections for this special place and the people who live there.”

The BLM has also failed to complete updates of its outdated Resource Management Plans for the region, which do not account for new horizontal drilling and multi-stage hydraulic fracking technology. The Navajo Nation and All Pueblo Council of Governors, National Congress of American Indians, 15 Navajo Chapter Houses, and the New Mexico House Legislature have all requested a moratorium on drilling until the BLM has adequately updated their planning process to include health, environmental, and cultural impacts of industrialized fracking in the region.

“It is unacceptable that the BLM intends to lease more lands in the Greater Chaco landscape to oil and gas. The BLM has failed to update their planning documents which include responsibilities for inventories, consultations, multiple use analysis and oversight of complex land jurisdictional issues.  BLM failure to complete their planning updates should preclude oil and gas leasing as part of the December 2018 sale,” said Mike Eisenfeld, Energy and Climate Program Manager with San Juan Citizens Alliance.

“This administration has received unprecedented opposition from Tribal Nations, New Mexicans, and Americans across the country who challenge the efforts to allow oil and gas to run roughshod over the Greater Chaco area,” said Rebecca Sobel, Climate and Energy Senior Campaigner with WildEarth Guardians. “Secretary Zinke and the Bureau of Land Management have systematically ignored commonsense calls for restraint on unfettered fracking in Greater Chaco. Until BLM implements meaningful management plans for the area, promises from leadership to safeguard the culture, community health, and environment of the Greater Chaco Landscape are yet unfulfilled.”