Woot woot! A new Governor in New Mexico along with a host of bold, progressive, new State House representatives, looking to the future and creating opportunities. We’re hopeful we can make big strides in clean energy, a just transition for workers and communities and economic diversification. And so far, we’re off to a promising start.

Here are the top 5 things the ETA does:

This is a bill we can whole-heartedly support. See the full press release below. You can see more about our Energy Transition Campaign here.

Senator Candelaria stated, “The Energy Transition Act creates the forward-looking energy policies Governor Michelle Lujan Grisham pledged during her campaign. A year in the making with countless stakeholder meetings and discussions with community members, the ETA is a bold and comprehensive bill that moves our public utilities and rural electric cooperatives away from coal and towards renewable and zero-carbon resources.”

Senator Stewart stated, “New Mexico is ready to move into a clean-energy future. The Energy Transition Act is landmark legislation that will move our state from coal to clean. I’m thrilled we have the leadership of Gov. Lujan Grisham to move New Mexico forward and excited to work with my colleagues to pass this bill and make New Mexico a national leader in fighting climate change.”

Representative Small stated, “Through the Governor’s strong negotiations, the Energy Transition Act strengthens the Renewable Portfolio Standard for our state, setting the course toward clean energy for decades to come. It also provides $40 million to San Juan workers impacted by the coal plant and mine retirements and efforts to diversify the economy in the Four Corners area, critical components to ensuring that San Juan survives and thrives into the future.”

Stephanie Maez, the Executive Director of ProgressNow New Mexico, stated, “We are excited to throw our full weight behind the Energy Transition Act. New Mexicans want clean energy and better paying jobs to our state. The ETA will do both.”

Mike Eisenfeld, a community organizer from San Juan Citizens Alliance and based in Farmington, stated, “The Energy Transition Act provides $40 million to help workers at the coal plant and mine, help the region diversify our economy so we can maintain our quality of life here and keep young people in the area. The ETA is the legislation we’ve been waiting for to help the Four Corners area directly.”

Steve Michel, Deputy Director of the Clean Energy Program at Western Resource Advocates, said, “The Energy Transition Act will transform New Mexico’s energy future. That future embraces low-cost renewables and eliminates all greenhouse-gas emissions from electric utilities by mid-century. The ETA provides substantial economic relief for communities affected by coal-plant closures and allows them to move past their dependence on fossil fuels and mining. The ETA is legislation worthy of the critical challenges and hopeful opportunities we face in the 21st century.”

Brian Condit, President of the New Mexico Building Trades, stated, “The New Mexico Building Trades stands in full support of this bill. It provides critical apprenticeship opportunities for our youth and provides valuable experience in the renewable energy sector, building a solid foundation for a future in the construction industry. That’s great for working families and great for our economy.”

Oriana Sandoval, Executive Director of the Center for Civic Policy, stated, “The Energy Transition Act encourages training programs for traditionally disadvantaged communities–that is exactly what New Mexico needs right now and we are proud to support this bill.”

Eduviges Hernandez, a member of Somos Un Pueblo Unido and a long time resident of Hobbs, New Mexico said, “New Mexico’s rural communities are often an afterthought when it comes to new jobs in emerging industries. The ETA ensures that workers in rural areas and our children are not left behind when it comes to clean energy jobs. We look forward to a more diversified set of job opportunities in Hobbs.”

Sanders Moore, Executive Director of Environment New Mexico, stated, “A diverse and broad coalition of groups have been working on the details of a new Renewable Portfolio Standard for well over a year, recognizing that’s what’s best for the health of New Mexico’s people and environment. The Energy Transition Act is forward-thinking and comprehensive. We are excited to work with Governor Lujan Grisham and the State Legislature to move our state toward a carbon-free energy generation, rooted in a strong requirement for renewable-energy development.”

Demis Foster, Executive Director of Conservation Voters New Mexico, stated, “We at CVNM supported Gov. Lujan Grisham early in her campaign because of her dedication to bringing New Mexicans together to create solutions, and the Energy Transition Act is evidence of this commitment in her administration. CVNM is proud to support the Energy Transition Act. The ETA is a leap forward toward the Governor’s vision and plan to lay the groundwork for an equitable transition to clean energy like wind and solar. We know that New Mexicans support economic development while also protecting our air, land and water and communities. The ETA provides a unique opportunity to do both in our state.”

SB489 will be assigned committees this week. Media availability includes: 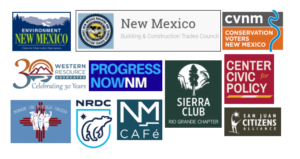