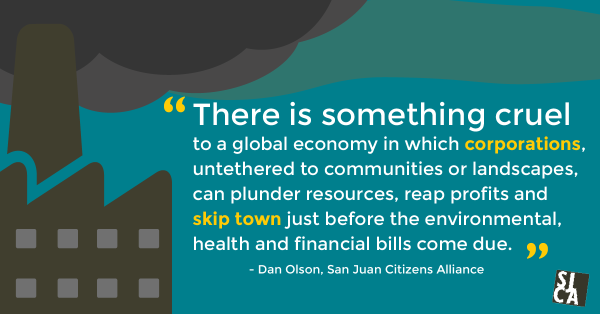 Power play over mine saddles Navajos with toxic asset

Imagine an unlikely scenario with me.

After years of watching a slow-motion train wreck at the Navajo Mine, I have a suggestion: the executives of Australia-based mining titan BHP Billiton. Let me explain.

For years, BHP owned and operated the Navajo Mine outside of Farmington. The mine, which sits on Navajo Nation land, is the sole source of coal for the adjacent Four Corners Power Plant, a hulking behemoth of a facility that for years led the county in spewing ozone-forming nitrogen oxides into the atmosphere.

In 2013, looking to sell the Navajo Mine, there can be little doubt BHP executives spent some prep time brushing up on Trump’s seminal work, The Art of the Deal. I can only imagine the collective squeal when said imagined executives stumbled upon these tremendous words: “The best thing you can do is deal from strength, and leverage is the biggest strength you can have. Leverage is having something the other guy wants. Or better yet, needs. Or best of all, simply can’t do without.”

Burning coal produces residues laden with heavy metals and other nasties. BHP had allowed the Four Corners Power Plant to dispose of this coal ash on Navajo Mine lands, millions of tons worth, and those waste piles were known to be leaking into the nearby San Juan River.

To a disinterested investor, the Navajo Mine had toxic asset written all over it. Who would buy it? The entity that needed to. The entity that simply couldn’t do without it. The Navajo Nation.

In a cruel but telling twist of fate, the Navajo Nation actually borrowed the money to purchase the mine from, get this, BHP.

San Juan Citizens Alliance, with a host of partners and allies, including Navajo tribal members, announced a major lawsuit this week against last year’s federal decision to permit the Navajo Mine and Four Corners Power Plant to operate another 25 years. The environmental and human health impacts are simply too great.

So, too, is the lost economic opportunity for the Navajo Nation. Rather than doubling down on coal in an era when corporations, countries and states are severing their ties with this antiquated energy source, it is time for the type of independent and robust analysis of impacts and alternatives that could have helped modernize the tribe’s energy economy.

There is something cruel to a global economy in which corporations, untethered to communities or landscapes, can plunder resources, reap profits and skip town just before the environmental, health and financial bills come due.

This complex situation is bound to get much messier before resolution is reached. One entity that won’t be around to wade through the mire is BHP Billiton.