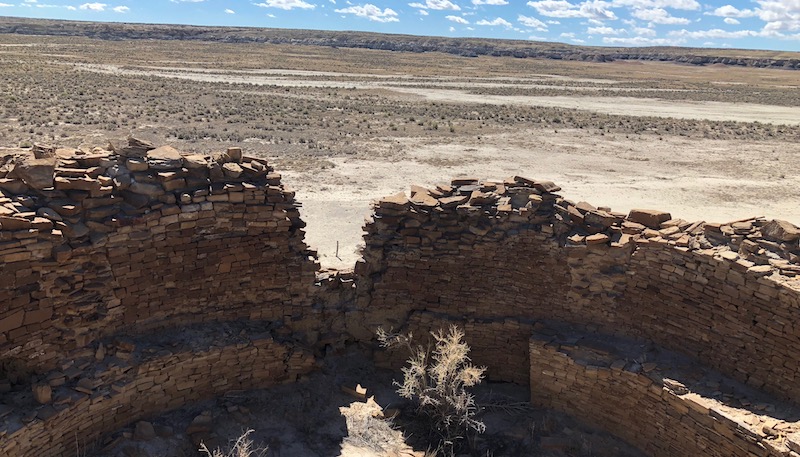 While much of the country grapples with the coronavirus pandemic, it’s full speed ahead at the Department of Interior approving oil and gas development projects.

One of the most contentious is a proposal for over 3,000 new oil and gas wells encroaching on Chaco Culture National Historical Park in northwest New Mexico. After dithering for almost a decade to analyze the consequences on Chaco’s internationally renowned cultural landscape and dark skies, the Bureau of Land Management has decided a 90-day comment period absolutely must be jammed through right now.

The vast new oil and gas development play overlaps Navajo communities surrounding Chaco. The Navajo Nation is presently overwhelmed with Covid-19 cases, experiencing the one of highest rates of disease per capita in the entire United States.

Normally, those communities would host public meetings about the BLM’s new drilling plan at chapter houses in Lybrook, Counselor, or Pueblo Pintado. But such meetings are off the table. One might expect the United States government to display compassion, and even just basic human decency, and defer meetings and its public comment deadline until the pandemic has receded. After all, the BLM was in no great hurry over the past decade, so why the rush now?

Perhaps it’s because the bosses, Interior Sec. David Bernhard and acting BLM director Wiliam Perry Pendley, feel the urgency to complete oil and gas permitting before the end of the year, in case this Administration doesn’t continue beyond December. Whatever the reason, BLM’s refusal to respond in a humane fashion to the crisis facing the Navajo Nation is beyond callous.

Rather than hold public meetings about its drilling plans, BLM instead has shifted to hosting virtual online public meetings. And what region in America has one of the lowest Internet bandwidths and fewest homes with Internet access, yes, the Navajo Nation. In its determination to jam through its decision by year end, BLM runs roughshod over any sense of authentic public outreach or engagement.

New Mexico’s Governor, the state’s U.S. Senators, its congressional delegation, and tribal leaders have all called on BLM to pause and behave like a decent neighbor. Their pleas have fallen on deaf ears in this Administration.

BLM anticipates over 3,000 new wells in the coming years, presuming recovery of oil prices. Advocates for protecting Chaco’s cultural landscape and nearby communities have urged at minimum a 10-mile buffer around Chaco be kept off limits to development. This would ensure protection for Chaco and its outlying cultural sites, and the remnants of the historic Chacoan road system. It would also help preserve the dark night skies for which Chaco is roundly acclaimed.

Thus it falls to the public at large to respond and comment on the behalf of the Chacoan landscape and the tribal communities consumed with life and death struggles. Visiting Chaco is a familiar rite of passage for many in our region, and now more than ever the future of Chaco is at hand.

The public can offer written comments to BLM through May 28 via an online portal, and alternatively can attend one of BLM’s virtual public meetings: https://www.blm.gov/programs/planning-and-nepa/plans-in-development/new-mexico/farmington-rmp-mancos-gallup-amendment

While no one can force BLM and the government to act humanely towards impacted communities, the public can certainly speak its mind. For those with the capacity to participate, there is no more appropriate time than now.