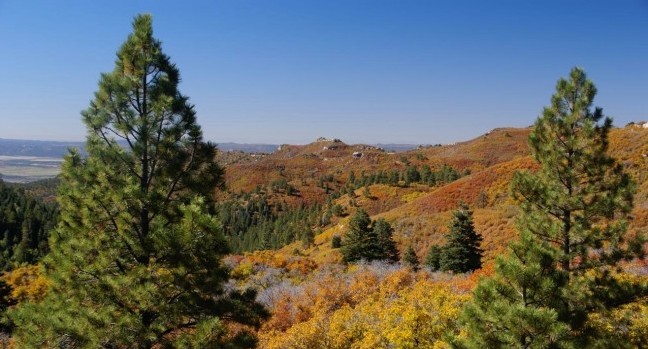 With extra time, add your voice to HD debate

This week, San Juan Citizens Alliance members helped persuade the federal government to give our community more time to weigh in on five parcels of public land to be leased for oil and gas drilling.

Before I explain “kind of,” let’s first orient ourselves to the parcels in question.

The Bureau of Land Management’s May 2016 oil and gas lease sale in Colorado includes five parcels of land on the San Juan National Forest that total approximately 8,000 acres in La Plata and Archuleta counties. More than 6,000 of these acres are found in the HD Mountains, a unique, low-elevation mountain range east of Bayfield.

To the east, the HDs are bounded by Chimney Rock National Monument, with an array of other Puebloan and non-Puebloan Native American sites found throughout the range. Its southern flanks overlay Southern Ute Indian tribal lands.

In addition to rich cultural history and connections, the HDs are recognized as relatively pristine, enough so that 25,000 acres of the range is a formally designated roadless area. Its location and attributes, including old growth ponderosa stands, make it critical year-round and winter-specific habitat for wildlife.

For more than a decade, there has been a knock-down, drag-out fight over oil and gas development in the HDs. Organizations such as San Juan Citizens Alliance, Earthjustice and Earthworks championed the cause of locals fed up with the lack of protections for this unique landscape and sued the Forest Service, winning a number of concessions. That said, drilling also proceeded, albeit scaled back from initial plans. At the end of the day, neither side could claim a decisive victory.

Fast forward to today. For years, no new leases have been sold on the San Juan National Forest because planners were working, for over a decade, to complete a new Land and Resources Management Plan. Now that the plan is finalized, the oil and gas leasing engine is sputtering back to life.

There is, no doubt, a rationale for why Forest Service employees chose these five parcels for their first post-plan lease sale. Relatively small and adjacent to existing development, the parcels check some boxes when it comes to the agency’s phased leasing approach.

But from another perspective, if ever an agency wanted to pick at a festering scab, the HD Mountains was the place to do it. Because the HDs are contentious, litigious and a spot loved by a cadre of battle-hardened activists still nursing wounds from a less-than-decisive victory, I can think of less touchy places to test-drive new oil and gas leasing regulations.

The “kind of” victory won earlier this week does not protect these parcels from sale. What we won was an extension of the 30-day lease-protest period, giving the public an additional two weeks to weigh in on the government’s plan to lease this land for oil and gas drilling.

The question is: What’s the public going to do with those two weeks? Would you take five minutes of your day to add your voice to a growing chorus of opposition to these lease sales? Come to the alliance’s website and we’ll show you how.

Community scale planning, as encapsulated in the BLM’s Master Leasing Plan approach, is the key to avoiding fights over future oil and gas drilling.

I hope the federal government has learned this lesson in the HDs and will provide the public a voice, up front, in planning for oil and gas development in other parts of our region.