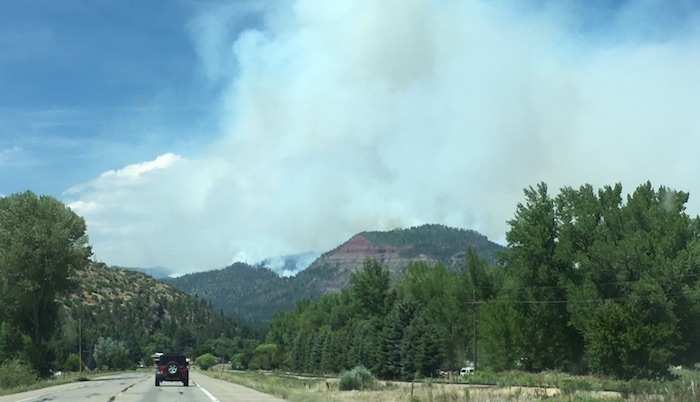 Fires and droughts should set off alarm bells

Our beloved Animas River has taken a shellacking the past few years, the most recent insults a combination of record low flows and wildfire induced mudslides. The Animas might be the blaring alarm bell for our society’s failure to act on climate change.

One of the driest winters on record kicked off the year, so much so we were reduced to debating whether a bare trickle of water in the Animas in Farmington constituted zero flow or not. That was compounded by the worst fire season in recorded history.

Diminished streams, stressed forests, ballooning wildfire seasons – these are the hallmarks of what some experts are now terming aridification.

We had been calling the year after year after year of dry winters and resultant low snowpack an extended drought. But eventually, it becomes the new normal, and it’s no longer an outlier. Aridification is a period of transition to an increasingly water-scarce environment.

According to the U.S. Department of Interior, our current drought is the driest 16-year period in the past 100 years, and one of the driest such periods in at least 1,200 years. Wow. If that doesn’t grab your attention, what does? And it is a perfectly predictable outcome of global greenhouse warming.

We are not likely to return to past conditions of “normal.” Rather, experts at the Colorado River Research Group suggest we have two possible new normals. One is a likely acceleration of our current drying trend if we continue on our present course. The other could be stabilization to existing levels of aridification if we seriously address the root causes of atmospheric greenhouse gas concentrations.

Along with diminished river flows, we’ve experienced an enormous increase in forest fires. The 10 largest wildfires in Colorado history have all occurred in the past 16 years, starting with our own memorable Missionary Ridge Fire in 2002. In fact, 19 of the 20 largest wildfires have taken place in this same era, with five occurring just this year.

We are gripped in drought, our new normal aridification, with record-breaking wildfires now routine. While it’s human nature to grapple with the symptoms rather than the cause, at some point it passes rationality to ignore the source of what’s happening – climate change caused by society burning long-buried fossil fuels and rapidly shifting our planetary atmospheric balance of carbon dioxide.

Since we are now living in an era fulfilling the predictions of climate change, why not address the root cause?

Yes, we can and should fireproof our homes in the wildland urban interface as much as we can. And we can address forest management by thinning oakbrush and pine stands that overlap our burgeoning suburbs.

But we need leaders who at a minimum are willing to acknowledge and address the source of the problem, i.e., burning fossil fuels. Some of our elected officials have suggested treating the symptoms of wildfire risks by trying to accelerate logging through limits on public involvement, but these are Band-Aids on a larger, looming crisis. Particularly if those same leaders cheer decisions to subsidize coal-fired power plants or eliminate rules to improve automobile fuel efficiency or allow wasteful venting of methane, all direct contributors to escalating carbon dioxide concentrations.

Drought contingency plans, such as working with farmers to conserve irrigation water or city dwellers to reduce lawn sprinklers, might well be needed, but ultimately, they are just fig leaves if we don’t deal with the underlying source of the problem.

Perhaps that’s the pitfall of leaving our fate to elected officials with a time horizon until only the next election. Can we continue to dither?