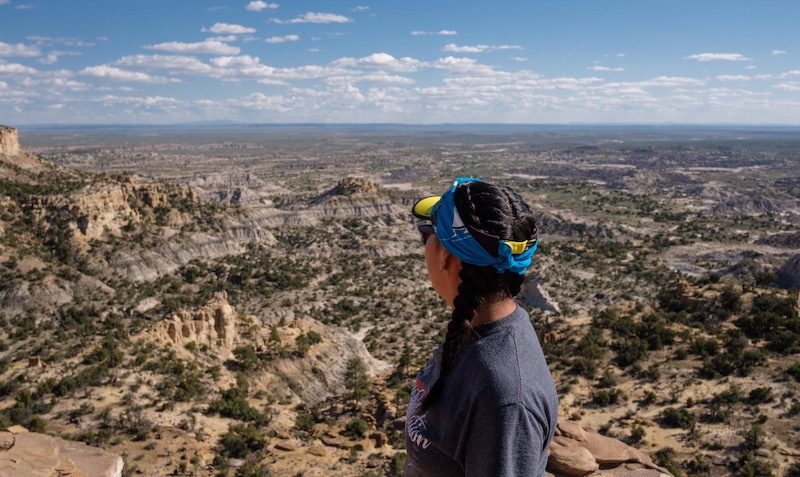 Anyone who has traveled the U.S. Highway 550 corridor to Albuquerque recently knows for themselves the extent of greatly expanded drilling activity.

Archaeological organizations and national park advocates are rightly concerned about the destructive impacts to the park’s setting and its outlier features, including the renowned Chacoan roads, some of which are now crisscrossed with oil and gas roads and pipelines.

As industrialization moves ever closer to Chaco, it also greatly threatens the dark night skies Chaco is also renowned for. Chaco is an International Dark Sky Park, but as nighttime travel along Highway 550 attests, the intensification of drilling brings with it nighttime skies lit by burning flares of natural gas and industrial light pollution.

The permanent destruction of irreplaceable cultural resources is one important concern about oil development encroaching on Chaco. And it’s the one that has garnered the lion’s share of attention.

But equally impactful are the consequences of industrialization on the living Navajo communities.

Rural roads are now industrial thoroughfares chock-full of drilling rigs and trucks. Hydrocarbon emissions waft around homes and schools. The nighttime skies burn bright from the flaring of gas.

The communities lack the resources to respond to this industrialization. When fires and explosions occur, as happened in 2016 when 36 oil tanks caught fire on a large well-site near Nageezi, the nearest responders were an hour away. When spills happen, as occurred last week in Escavada Wash, state and federal oversight is equally distant.

The Chaco protection act deals with both aspects, the impacts to historic cultural resources and to living communities. The legislation makes off-limits drilling for oil and gas on minerals owned by the federal government within 10 miles of Chaco Canyon and of major outliers at Kin Ya’a and Pueblo Pintado.

Just as importantly, the legislation notes the need for additional studies and protective measures to address health, safety and environmental impacts on communities, like those the communities have experienced from oil tank fires, spills, traffic and air pollution.

The bill has widespread support from archaeological and conservation organizations, along with Navajo Nation President Jonathan Nez and the All Pueblo Council of Governors, which represents the 20 Pueblos culturally connected to Chaco. The tribes affirmed the need to protect places sacred in their cultures and to protect a landscape part of their past, present and future.

The Chaco bill only deals with some of the prospective oil drilling near the park, just the minerals controlled by the federal government. However, the New Mexico State Land Office also controls a substantial amount of mineral rights. The state land commissioner is similarly concerned about impacts to Chaco and local communities and has convened a task force to determine how the state can partner to also protect Chaco.

Congress is moving quickly to take action on the Chaco bill. The House Natural Resources Committee held a field hearing April 15 in Santa Fe and supporters hope for a vote on the bill later this spring.

For full details of the bill, visit https://bit.ly/2VPPBsp.