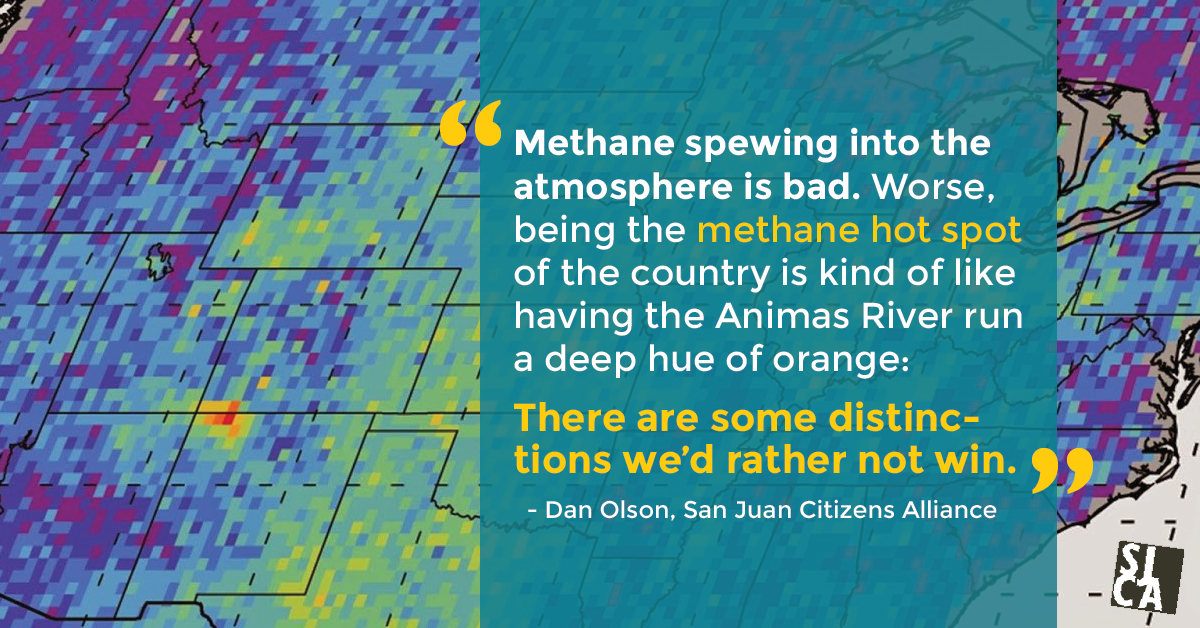 The oil and gas industry is awfully, dangerously, predictable.

A bit of background. Two years ago, our beloved Four Corners earned the unfortunate distinction of having the highest concentrations of methane emissions of anywhere in the United States.

What’s methane? Methane is the primary component of natural gas, a greenhouse gas 86 times more potent than carbon dioxide, and a pollutant that is usually correlated with the concurrent release of volatile organic compounds (VOCs) and other toxins harmful to human health.

Said in layman’s terms: Methane spewing into the atmosphere is bad. Worse, being the methane hot spot of the country is kind of like having the Animas River run a deep hue of orange: There are some distinctions we’d rather not win.

So what, exactly, did NASA say about the sources contributing to our methane hot spot? “The argument that most of the emissions are from natural seeps, definitely, we can put that to rest,” said Christian Frankenberg, a research scientist at NASA’s Jet Propulsion Laboratory. “Most of the plumes we observed were directly related to industrial facilities.”

Here’s what you need to know when considering the new NASA report. No one who knows much about regional air pollution was surprised by this “new” information. Why? Because the culprit of methane pollution in the San Juan Basin has been not only known, but documented, for years.

In 2014, by industry’s own reporting, oil and gas sources accounted for 80 percent of methane pollution in the San Juan Basin.

This extreme level of methane pollution is not synonymous with oil and gas production. There are many parts of the country – take Colorado and Wyoming to name two – that have significant oil and gas operations without similar levels of methane pollution. Why? Because those states have strong regulations in place to manage the leaking and purposeful venting and flaring of methane.

Not so in New Mexico, the state that has the worst record in the nation for the release of avoidable methane pollution. While New Mexico produces 4 percent of the country’s natural gas, it’s responsible for 17 percent of all natural gas waste on federal and tribal lands.

This avoidable pollution has more than just environmental and human health implications: It has financial ramifications as well. When methane is emitted to the atmosphere during oil and gas operations, U.S. taxpayers lose out on royalties for these publicly owned minerals. Over the last five years, sloppy industry practices have cost New Mexico taxpayers $50 million in missed royalties. That’s the type of money that could restore aging infrastructure or add to the coffers of underfunded schools.

So how does industry respond to its well-documented and now NASA-verified role in this regional environmental blight? Christi Zeller of the La Plata County Energy Council had this to say: “We disagree with it (NASA’s study) wholeheartedly. We know and believe the largest sources are that outcrop.”

Zeller can believe whatever she wants, but if by knowing something she is referring to the process by which we draw logical conclusions from well-sourced data, I’m going to go with the guys and gals at the NASA Jet Propulsion Laboratory on this one.

You know – the people who put a man on the moon 47 years ago.

Take Action: Ask the BLM to finalize their methane rule.