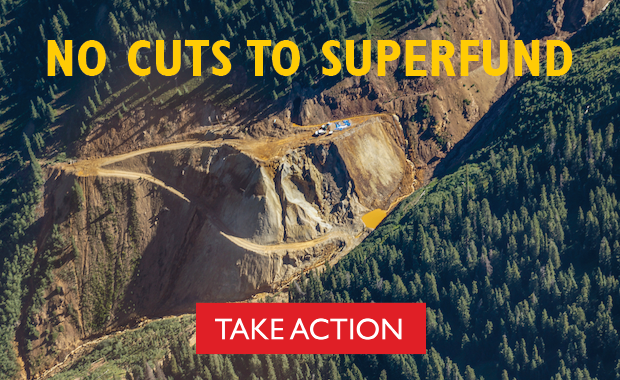 “The budget request before us today is downright offensive. I can’t square this with your rhetoric about returning EPA to its core responsibilities. Nothing was spared. EPA’s core is hollowed out…These cuts aren’t an intent to rein in spending, they are an intentional step to undermine science and ignore environmental and public health realities.”

Since it’s founding in 1970, the EPA has played a crucial role in ensuring that our country’s land, air, and water is protected for the health and safety of all Americans. The EPA’s Superfund program, in particular, is necessary for facilitating the cleanup of more than 1300 toxic sites across the country, including the Bonita Peak Mining District Superfund, the site of the 2015 Gold King Mine Spill. Unfortunately, the Superfund program is more important than ever.

Ignoring that reality, the Trump administration’s budget proposal for fiscal year 2018 would decrease funding for the EPA by 31%, including dramatic decreases in funding for environmental protection enforcement and key EPA programs. Cuts would include:

EPA administrator, Scott Pruitt, has defended the White House’s proposal, even while experts warned a Senate panel that the proposed budget cuts would likely delay cleanup at some of the nation’s most toxic sites, especially those requiring complex and lengthy remediation, like the Bonita Peak Superfund Site above Silverton, CO.

With approximately 166 million people – roughly 53 percent of the US population and 55 percent of children under the age of 5 – living within three miles of a Comprehensive Environmental Response, Compensation, and Liability Act (CERCLA or Superfund), Resource Conservation and Recovery Act (RCRA) Corrective Action, or a Brownsfields site that depends on EPA funding, it’s not surprising that a vast majority of Americans want a strong EPA. A Reuters/Ipsos opinion survey released in mid-January highlighted that more than 4 out of 5 Americans want EPA’s authority preserved or strengthened under the Trump Administration.

Quite simply, the country can’t afford the proposed EPA budget cuts, and Administrator Pruitt’s defense of the gutting of his agency flies in the face of his rhetoric regarding making the cleanup of our nation’s most toxic sites a “top priority.”

Join us in asking Congress to prioritize the health and safety of our communities by fully funding the EPA and its Superfund program.