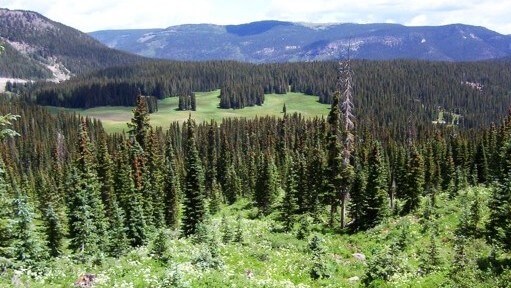 The threat to Pillage Wolf Creek Pass with a jumbo development that simply doesn’t belong in a stunning, remote, high altitude environment has been relentless over the last couple decades.  Unfortunately, the most recent decision to approve the land swap with billionaire developer Red McCombs and his team make road access, and therefore development, feasible.

We are committed to continue the fight.  Below is our press release regarding the most recent decision to disregard our 96 pages of objections to their grossly inadequate Environmental Impact Statement and indefensible Draft Record of Decision to approve the land exchange.

Stay tuned, we are going to be figuring out our next steps and doing a lot of organizing around this issue.  YOU will be essential in ensuring this saga has a happy ending.

Forest Service Ignores Concerns Raised in Objection to Proposed Land Exchange at Wolf Creek Pass, and Confirms that Decision Does Not Protect Lynx

The Objection Review concluded, that there “has been no violation of law, regulation or policy” and paves the way for the Forest Supervisor to approve a land exchange that enhances a private in-holding created in 1986. Portions of the National Forest are being provided to a development group led by Red McCombs that plans to construct a city the size of Aspen, housing 6,000-10,000 people, rotating through 1,700 units. This high-altitude location receives an average of 428 inches of snow annually, and is an important wildlife corridor for many species. This development has been at the center of controversy since 1986 when the Forest Service first confirmed that the Village proposal and land trade would not serve the public interest.

The most recent Forest Service Decision gives the Forest Supervisor permission to trade approximately 205 federal acres for 177 acres of private land within the boundaries of the Rio Grande National Forest. As a part of this exchange, the U.S. Government is also paying Texas billionaire Red McCombs $70,000 as a “cash equalization payment.” The land exchange intends to connect the private land to U.S. Highway 160, thus securing the ability for a larger population to access the developer’s private inholding.

“We are disappointed in this decision, as there are still many unanswered questions about this project,” said Matt Sandler, staff attorney for Rocky Mountain Wild who led the preparation of the Objection. “The lack of transparency and refusal to engage any cooperating agencies supports our belief that this decision is not in the public interest,” stated Sandler.

There is a slim chance that the Forest Supervisor could still choose protection of public land and Lynx over the private development proposal. “This land exchange decision violates the Southern Rockies Lynx Amendment and the planned development is in the middle of a lynx corridor that connects habitat critical to lynx survival and recovery,” said Christine Canaly, Executive Director of the San Luis Valley Ecosystem Council. “It will forever compromise and destroy good lynx habitat and impair the chances for this threatened species to recover to a full, secure population in Colorado. The Forest Service response confirms that the development is not compatible with the lynx, but it also gives the Forest Supervisor permission to approve the exchange after explaining why he decided to violate existing lynx protections, ” noted Canaly.

Opponents to the land exchange argue that the Environmental Impact Statement (EIS) that provides the basis for the Forest Service decision is inadequate and incomplete. The response confirmed that the developer’s proposal is too vague and conceptual to support a full analysis of the anticipated impacts.

“How is this decision in the public interest? The Forest Service’s Record of Decision and Objection review refuses to acknowledge their legal standing to curtail this grotesque project and is relying on Mineral County to protect federal lands through zoning,” adds Jimbo Buickerood, Public Land Coordinator for the San Juan Citizens Alliance. “Maintaining the integrity of the National Forest on Wolf Creek Pass is not just important to lynx, it is important to skiers, hunters, fishers, tourists, and residents who enjoy this unique landscape. The Forest Service is committed to accommodating the developer’s demands, even though the Forest Service admits that impact on Rocky Mountain Elk would be ‘appreciable.’”

The Objection and 38 supporting exhibits can be found here.