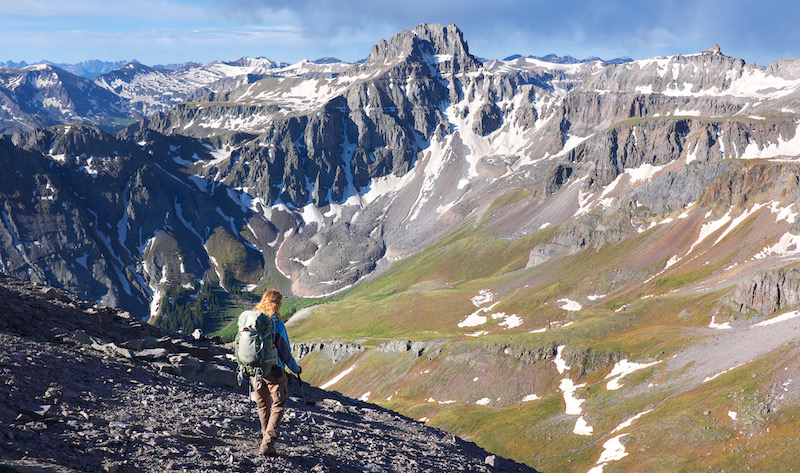 Really, it isn’t a surprise to most of us that the majority of Western Slope voters support our public lands and want them protected. For those who are skeptical, this recent poll clearly shows widespread support for Wilderness in general and the CORE Act in particular. Such support is across parties and user groups. So for those that need data, here it is.

Now it’s time for our elected officials to represent their district and state by voting for more Wilderness and public lands protection.

DURANGO, CO (October 25, 2019) – A new public opinion survey of western Coloradans could help the state’s congressional delegation better understand voter attitudes toward public lands issues currently before Congress, including an important lands bill expected to move next week. New Bridge Strategy recently completed a survey of voters throughout western Colorado to determine their views on a range of conservation issues, particularly increasing wilderness designations on some lands in the West.

“The poll release comes at a pivotal moment for Colorado,” said Mark Pearson, Executive Director of the San Juan Citizens Alliance. “Next week members of Congress will have the opportunity to vote on the CORE Act and send it along to the Senate for final action. Colorado needs this legislation to protect some of our most treasured landscapes and this poll shows that voters stand behind the idea that we can and should be doing more.”

The poll found strong support for the main proposals included in the Colorado Outdoor and Recreation Economy (CORE) Act, which includes 73,000 new acres of wilderness. Support is particularly strong in the counties directly affected by the legislation. Voters also showed support for increasing wilderness designations in principle. In addition, voters in western Colorado also back proposals to increase wilderness in desert and canyon areas in their region and want to keep Wilderness Study Areas intact, rather than removing that designation on some public lands.

“We haven’t surveyed public opinion on the Western Slope about wilderness and land protections generally in well over a decade,” said Pearson. “With the CORE Act pending in Congress, and other legislative options under consideration, it’s invaluable to ask voters their opinions about preserving wilderness and maintaining current land protections like Wilderness Study Areas.”

Specifically, the survey found that:

“This poll confirms what we already know about our County and our neighbors in the region.” said San Miguel County Commissioner Hilary Cooper. “Our public lands are highly valued and need to be protected as economic drivers for our communities and for the ecosystem service benefits they provide. Each of the designations in the CORE Act have been field tested and built from the ground up. They stand the test of time as support for these important areas remains high as evidenced by this poll.”

The strong support in the poll may be grounded in the fact that voters view public lands as beneficial for the economy. They also anticipate outdoor recreation becoming increasingly important in the region. This is not surprising given that most voters in this region say that they engage in outdoor recreation activities and/or sportsmen activities.

“The recent poll affirms what the citizens of Pitkin County and our neighboring continental divide watersheds have advocated for over ten years. In no uncertain terms, we have repeatedly asked our representatives in Congress to protect the Thompson Divide,” said Greg Poschman, Pitkin County Commissioner. “The Pitkin County Commissioners are unanimous in our support for the Thompson Divide as an essential element of the CORE Act. Also importantly, before the last of the WWII 10th Mountain Division ski troopers pass on, Coloradans would like to honor the brave veterans and fathers of our modern ski and outdoor recreation industry by seeing Camp Hale designated as a National Historic Landscape.”

To learn more about the CORE Act, visit: https://coreact.org/   #COREAct