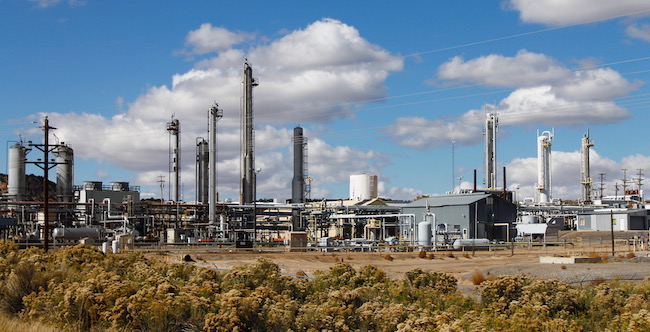 The oil and gas industry is no longer exempt from reporting toxic releases publicly through the Toxic Release Inventory (TRI).

EPA estimates the oil and gas industry releases more toxic chemicals than any other industry, save power plants. Yet, they haven’t been required to report them. Until now.

TRI is a powerful public reporting requirement allowing communities access to information about what toxic chemicals are being released to their air, land and water. Yet, inexplicably the oil and gas industry has been exempt.

Four years ago we joined 16 other groups in petitioning the EPA to require public reporting of toxic releases from the oil and gas industry. Two years ago we signed onto a letter again urging the agency to act. The letter included compelling data demonstrating that over 400 facilities would be compelled to report were they in other industries. Why shouldn’t the public know about their releases?

In New Mexico, this could impact up to 27 facilities and in Colorado up to 43.

Proposal is a Victory for Open Government, Transparency, and the Public Right to Know

“Today’s proposal by EPA marks significant progress for public health, the environment, and the right to know,” said Adam Kron, senior attorney for the Environmental Integrity Project. “The oil and gas industry releases an enormous amount of toxic pollutants every year, and communities deserve to know what they’re facing. We hope EPA will move swiftly to finalize and implement this simple yet vital public-reporting rule.”

The proposed regulations come in response to a 2012 petition filed by the Environmental Integrity Project and eighteen partner organizations. The groups asked EPA to require facilities in the oil and gas extraction industry to report their toxic pollution to the federal Toxics Release Inventory (TRI), an online public database that has existed for thirty years and to which most other industries have long reported.

“This welcome step from EPA is long overdue,” said Amy Mall, senior policy analyst for the Natural Resources Defense Council. “People deserve to know what toxic chemicals are being released near their homes, schools and hospitals. Yet, for too long, the oil and gas industry has been exempt from rules that apply to other industries. We will hold the next administration accountable for putting an end to that special treatment.”

Under EPA’s proposed regulations, approximately 281 to 444 natural gas processing facilities across the U.S. would have to start reporting their releases of toxic chemicals, including xylenes (which can cause breathing problems, headaches, and neurological problems), formaldehyde (which is a carcinogen and damages the respiratory system), and benzene (which can cause cancer). Not included in EPA’s decision are well sites, compressor stations, pipelines, and other smaller facilities that employ fewer than 10 people.

The proposed rule was published in the Federal Register this morning, and can be found here.

“The oil and gas industry knows its polluting our neighborhoods,” said Aaron Mintzes, Policy Advocate for Earthworks. “EPA isn’t proposing to make them stop, just requiring these companies to let people know about toxic pollution released near their homes, schools, and workplaces. And while this rule would cover just natural gas processing plants, by the time they finalize this rule, EPA should also add the well heads, pipelines, compressor stations and other oil and gas infrastructure.”

In support of its proposed rule, EPA has stated that there are 517 natural gas processing facilities in the lower-48 states as of 2012 (a subsequent estimate found 551 facilities in 2014), and more than half of these plants would meet the Toxics Release Inventory’s chemical reporting thresholds for twenty-one different toxic chemicals, including benzene (a carcinogen), hydrogen sulfide, n-hexane, and methanol.

Congress established the Toxics Release Inventory in 1986 to inform the public about the release of sometimes carcinogenic chemicals (such as benzene) from industries in the wake of the deadly 1984 Bhopal disaster in India, in which toxic gases killed thousands of local residents.

QUOTES FROM ORGANIZATIONS THAT PETITIONED OR SUED EPA:

Anne Havemann, General Counsel at the Chesapeake Climate Action Network: “The public has a right to know when toxic and harmful pollution is released, and this right does not end at fracked-gas processing facilities. We’re glad to see EPA acknowledge that right with today’s proposed rule.”

George Jugovic, Jr., Vice President of Legal Affairs at PennFuture: “EPA’s decision to add natural gas processing plants to the Toxics Release Inventory will add critically needed information about the level of toxic chemicals being released by an industry that generally seems adverse to informing the public about the potential health risks of living near these facilities. The only way for state and local governments to make informed decisions about protecting public health is to increase transparency about the nature and level of toxic chemicals being released by the shale gas industry. This is an important step forward to protecting and informing citizens and their families.”

Joseph Otis Minott, Executive Director and Chief Counsel of Clean Air Council: “A true victory for the many residents of Pennsylvania that live in gas shale areas. They have suffered from this polluting industry for years. The gas industry has been far too secretive about its toxic emissions.”